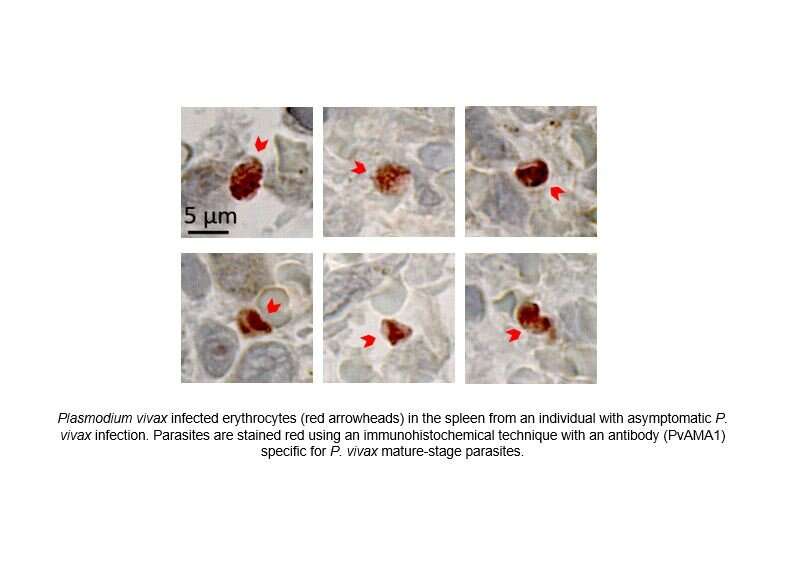 Groundbreaking studies published today in the New England Journal of Medicine and PLOS Medicine have found large numbers of malaria parasites hiding in the human spleen where they actively multiply in a previously unrecognized life cycle.

Until now, it was thought that once malaria parasites reached the blood stream, they circulated and multiplied only in the blood. New research, led by Dr. Steven Kho and Professor Nick Anstey at Australia’s Menzies School of Health Research (Menzies) and Professor Pierre Buffet at the University of Paris, with partners in Indonesia, found that in chronic malaria, concentrations of parasites were hundreds to thousands of times higher in the spleen than found in the circulating blood.

Lead author Dr. Kho examined spleens from people in Papua, Indonesia, undergoing spleen removal following road accidents. He found that the patients generally had no symptoms of malaria before the accident, but 95 percent of patients had large numbers of live parasites hiding in the spleen.

“Our findings redefine the malaria life-cycle. Chronic malaria should be considered predominantly an infection of the spleen, with just a small proportion circulating in the blood,” Dr. Kho said.

Senior author Professor Anstey says the studies also found that the human spleen traps large numbers of young red blood cells, called reticulocytes, which are the only type of red cell that Plasmodium vivax can infect.

“This makes the spleen a highly favorable location in which the vivax malaria parasites can multiply” said Professor Anstey.

Co-senior author Professor Pierre Buffet says that until now the spleen has been mainly considered to be an organ that destroys malaria parasites and which parasites try to avoid.

“While the spleen does filter out and destroy some parasites, we now show it also provides a shelter for long-term persistence of parasites” explained Professor Buffet.

The research team emphasize the importance of the findings. “Persistent infection of the spleen has major clinical and public health implications, including a significant contribution to anemia” said Dr. Kho.

Professor Anstey says that some people with large numbers of parasites hiding in the spleen do not have parasites detectable in the blood.