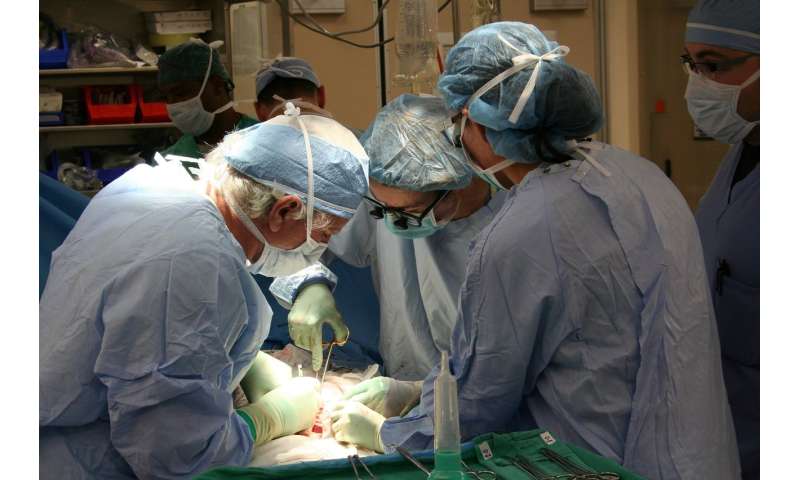 With the number of liver transplants performed at the University of Chicago Medicine on track to reach a 20-year high, a new study by the institution’s researchers reinforces the growing popularity and safety of using livers infected with hepatitis C in transplants.

“Every year, several hundred people die while waiting for a donated liver in the United States,” said Thomas Cotter, MD, a transplant hepatology fellow and first author of the study. “This research will help reassure patients that getting a liver from a donor with hepatitis C is as good as getting an uninfected liver.”

Hepatitis C, which spreads through exposure to infected blood, causes inflammation of the liver that can result in lasting liver damage. Transplanting livers infected with hepatitis C to patients who do not have the disease is possible because of the adoption of a revolutionary class of drugs in 2014 called direct-acting antivirals (DAA), which render the hepatitis C virus undetectable in the bloodstream. DAA therapy has had a positive domino effect on several patient groups:

Published in the journal Transplantation on July 7, the retrospective study reveals the number of hepatitis C-positive livers transplanted to hepatitis C-negative patients rose 35-fold over the past four years in the United States, from eight in 2016 to 280 in 2019. The research also confirms that patients who received the infected livers and were then cured of hepatitis C did as well two years after their operations as patients who received livers that weren’t infected.

The UChicago Medicine team has published a number of high-impact papers on factors that can affect the outcomes of liver transplant patients. Its Hepatology study in 2019 revealed similar results to the Transplantation study, but was limited by the low number of hepatitis C-positive liver transplants to hepatitis C-negative patients that had been performed in the U.S. at the time.

Until 2016, hepatitis C was the leading cause of both liver cirrhosis and liver transplants in the U.S. But as the rate of liver transplants for hepatitis C has decreased (down 50% since 2014), alcohol-associated liver disease has become the most common reason for liver transplants. In June, the team published a study in the American Journal of Transplantation that described an eight-fold increase since 2014 in the number of liver transplants undergone by patients with alcoholic hepatitis, a severe form of alcohol-associated liver disease. The team found that patient outcomes were excellent. Doctors in the UChicago Medicine transplant program have performed a number of such transplants, and use a carefully devised patient selection criteria in order to ensure good outcomes.

The more recently published Transplantation study also found that up to 70 percent of acute hepatitis C infections occurred in intravenous drug users, and that these cases correlated with states (such as Indiana, Michigan and Ohio) in regions that had some of the highest practices of using infected organs in transplants.

In some states, less competition for organs may mean hospitals have fewer incentives to use Hepatitis C-infected livers. Institutions that perform fewer transplants may also be more cautious when adopting new approaches, Cotter hypothesized.

Cotter also helped write a study published in June in Hepatology on patients receiving heart and liver transplants to treat congenital heart disease. The study captured the dramatic increase in congenital heart disease patients who originally had surgery in the 1980s and 1990s and are now presenting with heart failure and cirrhosis. Many of these patients are undergoing heart-liver transplants, with acceptable outcomes.

The study additionally revealed that transplant centers that perform at least one heart-liver transplant annually have better outcomes. Cotter said UChicago Medicine has the necessary expertise to meet this growing patient population, particularly when considering the institution has performed more heart-liver-kidney transplants than any other center in the world.