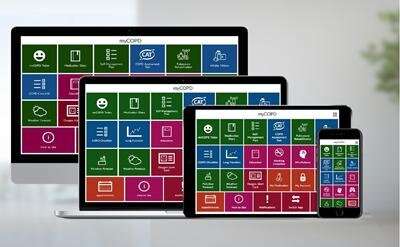 A Southampton-developed healthcare app that helps people with Chronic Obstructive Pulmonary Disease (COPD) manage their condition can speed up recovery after hospital admission and reduce flare-ups of symptoms, a newly published study has shown.

At a time when fewer people are able to access face-to-face consultations with their GPs and elderly patients with conditions such as COPD need are shielding, these are very encouraging findings for the future of digital health services.

In this new study, 41 patients admitted to hospital with severe exacerbations of COPD were allocated into two groups, with one group receiving their regular treatments and the second group of patients set up with access to the MyCOPD app as well as receiving treatment as usual.

MyCOPD gives patients access to a broad range of services wherever they are in the world, without the need to travel to clinics or join waiting lists. These services include receiving education from medical experts, information on how factors such as pollen, pollution and the weather in their area could affect their condition and videos that demonstrate how to use inhalers correctly. Users also complete daily diaries of their symptoms and medication, which allows the app to help them identify when they are deteriorating and provide advice on appropriate courses of action.

The results of this latest trial, published in the journal NPJ Digital Medicine, showed that over the course of three months, the number of further exacerbations within the group using the app was nearly half that for those who just received treatment as usual (18 compared to 34). Incorrect use of inhalers also reduced by around 80% for MyCOPD users, compared to a fall of around 30% for the control group.

Significantly, the average age of participants using the app was over 65 and despite not being regular web users, all were able to adapt to the technology.

MyCOPD, developed and hosted by my mhealth, is one of the largest apps of its kind and one of a small number of digital health apps with NICE approval. The Department for Health and Social Care highlighted it in their 2019 review into digital healthcare because of its potential to deliver better outcomes for patients and improve NHS productivity. Now this latest peer reviewed trial provides further evidence of its benefits.

Professor Tom Wilkinson of the University of Southampton who developed the app and led the trial said, “COPD has a significant impact on peoples’ daily lives so we wanted to develop a means of healthcare that is like having an expert in your pocket; giving you advice whenever you need it.

“The transition towards digital healthcare has been taking place for some time but has accelerated since the outbreak of COVID-19. Patients with conditions such as COPD can be particularly vulnerable now so it is important that we have evidence of the effectiveness of these technologies.