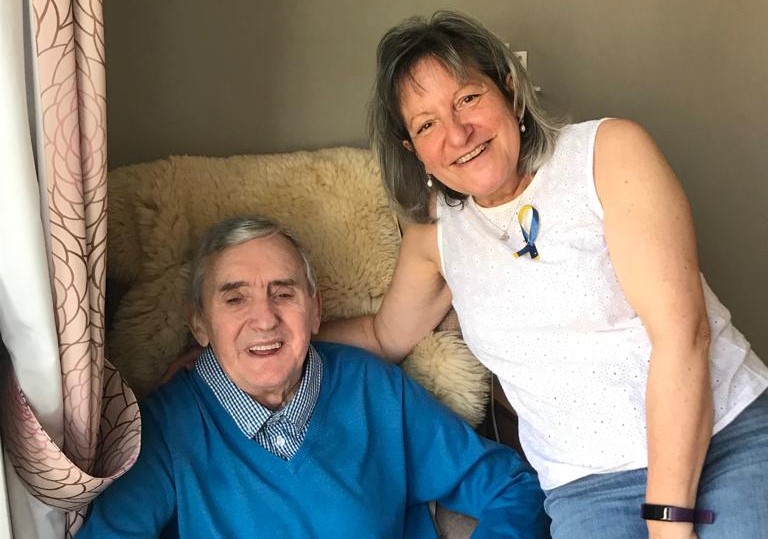 I am a living widow.

Although he hasn’t died, I have been grieving for my husband, John, since August 2019, when he was diagnosed with terminal frontotemporal dementia behavioural variant.

It is a despicable disease that unlike more common forms of dementia, which affect your memory, changes your personality and behaviour.

It has changed the man I have known and loved nearly all my life into someone I barely recognise. I’ve spent years mourning the man he used to be – and I know the worst is still to come.

John and I grew up on the same estate, our families living just two doors apart from one another, and I spent my childhood playing with his younger brothers.

We began courting when I was 16 years old. He moved away to London with work as a computer analyst but that didn’t dull our romance.

Instead, we wrote one another letters and when he finally moved back north, we got married in May 1984 when I was 25, surrounded by cherry blossom, our bridesmaids in primrose yellow.

I was a naturally shy person and John, so full of life, built up my confidence, introducing me to so many new, different things.  We worked together in the same office for a number of years.

He was a scout leader from his teens, as which he instructed canoeing and led hikes all over the moors, near where we lived. He was a member of the local amateur dramatics society. He loved everything from kicking his heels up in a musical to reciting monologues in more serious dramas. He has always had a great sense of humour and love of comedy, which still shows through sometimes.

He volunteered from the age of 16 with the Royal Observer Corps and was awarded the Lord Lieutenant’s Certificate and Medal for his service and dedication.

He was and still is my best friend – and an amazing father to our son, Matthew, when he came along. We all went camping together, he built him a climbing frame in the back garden and encouraged him in lots of ways, supporting everything he did.

He was extremely easy-going. In all of our life together, I’ve only seen him lose his temper twice.

Then, about 14, 15 years ago, he started to change. He lost interest in doing anything. ‘I’ll sort out the garden,’ he’d say on a weekend. But he’d never actually make it outside.

He stopped coming to see me and Matthew in the brass band we played in, stopped invigilating at the school. If I got too close in bed, he’d edge away from me. He moved into the spare room when I decorated ours, and never moved back.

The way he’d talk to me changed. He’d always been so loving and attentive. Now, his tone was brusque, his words cold.

‘Would you just shut up?’ he snapped at me in a meeting at work one day. Another time, I repeated a question when he didn’t reply and he turned to me. ‘When I’m finished doing this, I’ll answer you,’ was his terse reply.

Not only was it humiliating, it was confusing. I couldn’t understand the shift in him.

I thought he might be depressed or that maybe, as a Type 1 diabetic, his insulin levels were incorrect. He’d been diagnosed with rheumatoid arthritis in his fingers – could he have been in pain?

I started to dread spending time with him.

‘You treat me like something on the floor,’ I told him once, before rushing out of the house with the car keys. I just needed to get away from him.

I tried taking him to the GP but we didn’t get very far.

In August 2019, we were on holiday in a canal boat, when John started throwing up black bile and I had to call the emergency services. It turned out, he couldn’t find his insulin and rather than ask me where it was, he’d stopped taking it.

That was when I told the doctor something needed to be done. I couldn’t carry on like this.

Finally, he was referred for MRI scans and tests and eventually he was diagnosed with frontotemporal dementia.

Matthew asked afterwards if I was relieved to have the diagnosis, but if I’m honest, I wasn’t. Yes, now I knew that it was the disease, rather than John talking, but there was no cure. I still had to live with a man that, on some days, I barely liked.

Despite that, nothing could change the fact that I still loved him.

I tried to look after him at home with the help of carers but soon he was refusing to shower. Personal care became an issue. He also started craving sweet foods, which, with his diabetes, could be really dangerous for him.

I had to put locks on the kitchen, bells next to the living room door, so I knew where he was. I barely slept, as I kept an ear out for him getting out of bed.

My role changed so gradually from a wife to a carer that I barely realised it was happening. The stress and pressure were enormous – especially because John remained convinced nothing was wrong with him.

Eventually, after much persuasion from my GP and his carers, I allowed John to go into respite care. It took a few stays to find the right care home but eventually, we found somewhere where he was happy and I trusted them to take care of him the way I would.

The relief was enormous. Finally, I could sleep soundly and all of the niggling health problems I’d been facing soon cleared up. I still missed John, and our life together, terribly, though.

So when in February, he moved into the care home permanently, I was devastated. But even through my sadness, I could see he was more comfortable there than he was at home.

The staff say he asks for his wife Linda and he smiles when I go in – which I do nearly every day. We play dominoes and chat.

At home though, I feel like I don’t really fit in anymore. I’m still married, but I don’t have a husband to spend my retirement with. I’m 64 and John is 74 – in another world, we should be living out our golden years, going on holidays and enjoying life.

I watch other couples our age setting off on trips and I can’t stop the envy that bubbles up, as I wish it could be us.

Instead, I’m alone, in a living hell of endless grief as the dementia takes more and more of John. I know one day, he’ll forget how to talk, how to swallow, and forget me and I just can’t bear it.

Luckily, I’ve found other people in my situation in online support groups, some who are as young as in their 20s with young children – I never knew dementia affected such young people until I was in this position. These groups are people in my situation who understand the toxic combination of guilt and grief I feel.

In an attempt to channel my feelings into something positive, I’m doing the Trek26 challenge for Alzheimer’s Society, where I’ll walk 26 miles to fund more research into dementia.

Because this cruel, cruel condition can’t keep taking our loved ones away from us, one piece at a time, while we can do nothing but stand by and watch helplessly.

Join hundreds of people walking to stop dementia in its tracks by signing up for Trek26 or one of 25 Memory Walks. Visit www.alzheimers/events for more information.

As told to Sarah Whiteley