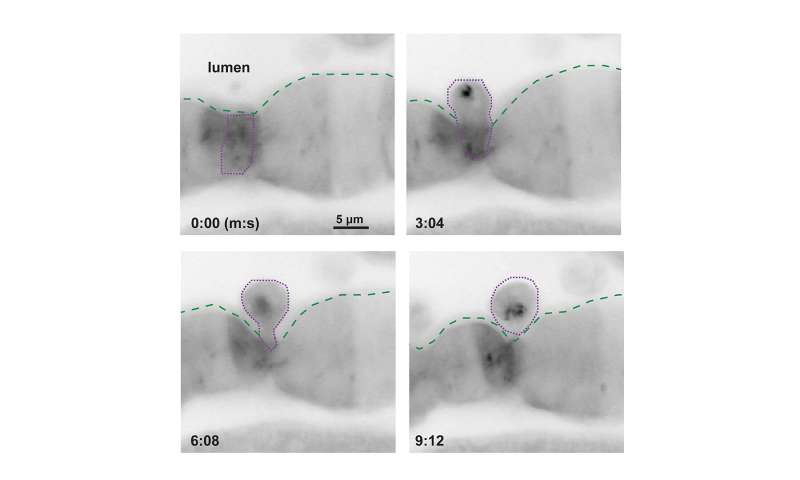 A team of Duke researchers has discovered that cells lining the gut of zebrafish—and probably humans too—have a remarkable defense mechanism when faced with certain kinds of toxins: they hit the eject button.

“The gut has the challenging job of handling all the chemicals that we consume or produce, and some of those chemicals can be damaging. So the gut has evolved many interesting ways to defend against damage,” said Ted Espenschied, a Duke graduate student who led the effort as part of his dissertation research.

The Duke team was testing more than 20 non-steroidal anti-inflammatory drugs (NSAID) in an attempt to make the zebrafish a new model for studying chemical injury in the gut. The fish are cheap to maintain, easy to breed, and most importantly, translucent for the early part of their lives, Rawls said. It’s also easy to administer chemical exposures and measure their environmental conditions via the tank water.

The researchers found something unexpected.”It’s often the case that drugs have multiple off-target effects,” said John Rawls, an associate professor of molecular genetics and microbiology and director of the Duke Microbiome Center.

But only one of the drugs they tested seemed to create any measurable differences in the fish, an old NSAID called Glafenine. It had been an over-the-counter oral painkiller used in Europe and the Middle East for three decades, but was taken off the market after being linked to kidney and liver damage.

Glafenine was making the fish shed up to a quarter of the cells lining their intestines overnight by a process called delamination. What hadn’t been recognized before is that delamination, which seems catastrophic, is actually a highly effective defense strategy.

The lining of the gut is a single layer of finger-like epithelial cells packed closely together. When a gut epithelial cell is distressed, it somehow becomes marked for destruction. During delamination, neighboring epithelial cells push against the doomed cell to loosen its anchor to the basement membrane they all stand on. The neighbors squeeze in on it and crowd it out until it pops up and is carried away to die in the gut. 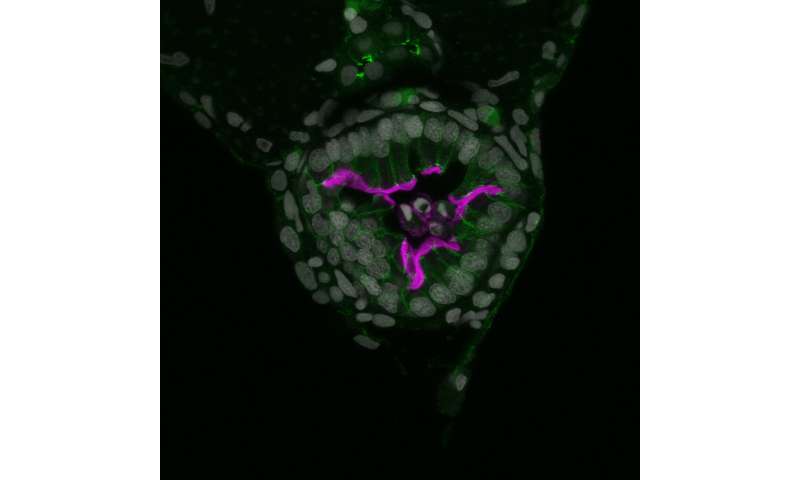 “We weren’t expecting delamination to be protective,” Espenschied said.

Espenschied pivoted on the unexpected finding. “Only one NSAID had this remarkable effect of causing delamination of the gut epithelium and we were wracking our brains trying to figure it out,” Espenschied said.

“So we chased it,” Rawls added.

After many experiments and a detailed analysis of Glafenine’s chemical properties, Espenscheid determined that it wasn’t the drug’s NSAID qualities that harmed the gut, but rather its ability, apparently unique among NSAIDs, to inhibit a cellular structure known as the multidrug-resistant, or MDR, efflux pump.

These pumps exist to help purge unwelcome chemicals from the interior of the cell. Cancer researchers have been very interested in finding ways to block MDR efflux pumps because tumors ramp them up dramatically to push chemotherapies out of cancer cells, foiling cancer therapy.

Much less is known about what the pumps do in normal cells. “We do know that if you block these pumps, cells are unable to clear toxic chemicals and problems ensue,” Rawls said. When Glafenine blocks the MDR efflux pumps in zebrafish, the gut responds with delamination, by means the researchers haven’t yet identified.

“We don’t know yet which cells leave and why,” Espenschied said. “What separates that cell from its neighbors is a really fascinating question that we don’t know the answer to yet.”