Green tea and blueberries may protect you from DEMENTIA, study suggests

Green tea may stave off dementia, a study suggests.

The compound resveratrol – found in blueberries, grapes and red wine – also had a similar effect on human brain cells.

Catechins and resveratrol possess anti-inflammatory properties, which may explain their plaque-clearing abilities.

Alzheimer’s is the most common form of dementia which affects more than six million Americans,.

It is characterized by a lack of communication among neurons in the brain, resulting in loss of function and cell death. 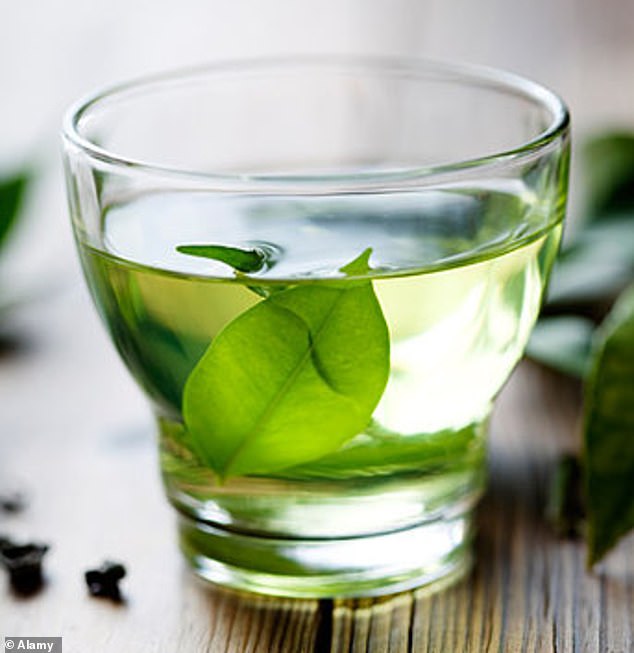 Catechins are compounds in green tea that have antioxidant-like effects that help prevent cell damage and soothe inflammation in the brain. Tufts researchers considered this and 20 other compounds for their anti-Alzheimer’s properties including resveratrol, common in blueberries and grapes.

More than 5 million people suffer from the disease in the US, where it is the 6th leading cause of death, and more than 1 million Britons have it.

In a brain afflicted with Alzheimer’s, abnormal levels of certain naturally occuring proteins clump together to form plaques that collect between neurons and disrupt cell function.

But catechins and resveratrol proved effective at reducing the formation of plaques in those neural cells. And they did so with few or no side effects.

Some of the other compounds tested including curcumin from turmeric, the diabetic medication Metformin, and a compound called citicoline, also prevented plaques from forming.

They tested the efficacy of 21 compounds in a 3D neural tissue model made of a nonreactive silk sponge seeded with human skin cells that, through genetic reprogramming, were converted into self-renewing neural stem cells.

Dr Dana Cairns, a research associate in the Tufts School of Engineering and leader of the study said: ‘We got lucky that some of these showed some pretty strong efficacy.

‘In the case of these compounds that passed the screening, they had virtually no plaques visible after about a week.’

The research team’s findings that point to the anti-plaque properties of commonly found compounds have the potential to benefit millions and build upon years of research into their therapeutic benefits.

Green tea and berries are rich in flavonoids, which can reduce cell-damaging free radicals and soothe inflammation in the brain and enhance brain blood flow.

The Tufts researchers’ findings do not say conclusively that the neuroprotective properties of the 21 compounds studied will help beat back the progression of dementia.

Some of the compounds studied, for instance, are not readily absorbed into the body or bloodstream.

And some compounds were unable to permeate the blood-brain barrier, a barrier between the brain’s blood vessels and the cells and other components that make up brain tissue.

The purpose of the blood-brain barrier is to protect against circulating toxins or pathogens that could cause brain infections.

Further study into the adaptablility of these compounds to better permeate the bloodstream and the blood-brain barrier is needed, according to Dr Cairns.

But her team’s findings are significant because there is currently no cure for Alzheimer’s disease and treatments to slow the progression of the disease are limited.

Alzheimer’s is not the only cause of dementia, which in the US affects over 7 million people. Other causes include Parkinson’s Disease and vascular dementia caused by conditions that block or reduce blood flow to various regions of the brain.