GPs will be paid a bonus of £11.50 for every obese patient they refer for diet plans and fitness trackers as part of NHS anti-obesity drive

GPs will be receive a bonus of £11.50 for every obese patient they refer for weight management help as part of the Government’s anti-obesity drive.

With the goal of slimming down the nation’s waistline, the NHS will pay doctors to put up to 700,000 patients on special diet plans, with apps and wearable activity trackers also available to help them lose weight.

In a letter to GPs yesterday, doctors were told they could sign up to the bonus scheme to identify and refer obese patients to the NHS Digital Weight Management Service.

It forms a part of Boris Johnson’s drive to crack down on Brits’ weight, with the PM having famously admitted he was ‘too fat’ when he was hospitalised by coronavirus last spring.

But the scheme has been slammed by the British Medical Association (BMA) union as being ‘fundamentally flawed’.

The £20million programme is particularly targeted at children and people living in poorer areas with obesity, diabetes or hypertension.

From July, it will become the default option for obese people — white adults with a BMI of more than 30, or above 27.5 for BAME people. 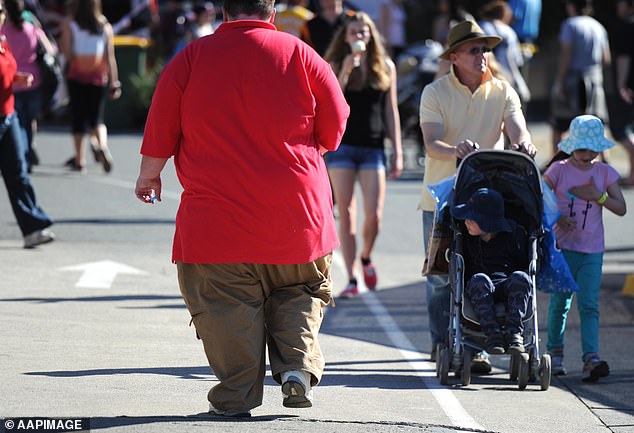 GPs will be paid a bonus £11.50 for each obese patient they refer for weight management help as part of the Government’s anti-obesity drive

People who are overweight or obese are more likely to develop severe Covid and die from it because they are generally less healthy and have worse immune systems.

The coronavirus has been found to prey on people who don’t have good health – it causes fluid build-up in the lungs, blood clotting, swelling in the airways and blood vessels, intense fever and can trigger immune over-reaction. All of these can seriously damage vital organs.

Overweight people are more likely to suffer severe versions of these effects because their bodies are already struggling to cope as a result of the strain of carrying excess fat, hormonal and chemical changes trigged by obesity, and higher rates of long-term illnesses like diabetes and high blood pressure.

Fat in the belly pushes up on the diaphragm – the breathing muscle – and compresses the lungs, making them weaker and less able to chuck out the viruses when they get in, Science magazine explains.

Blood is also more likely to clot because vessels are damaged and don’t work properly, partly because of constant swelling and irritation caused by chemicals released by fat. One researcher told Science obese people with Covid had ‘the stickiest blood I have ever seen’. These clots then travel to the lungs and other organs and can be deadly.

GPs can also refer patients to other services, including the NHS Diabetes Prevention Programme, which teaches people at risk of the disease how to change their behaviours to avoid condition to avoid developing it.

The BMA last night labelled the scheme ‘micromanagement’ from NHS bosses and said it was clinically and practically flawed.

Dr Richard Vautrey, BMA GP committee chair, said: ‘Today’s announced enhanced service is fundamentally flawed, will have little to no impact in tackling the problem, and will present significant rise in workload at a time when practices are at breaking point.

‘Obesity can have a devastating impact on people, their health and ultimately their way of life, and GPs want to be able to support their patients in the best way possible.

‘However, this ES is not the right way to do it. It is clinically flawed, overly bureaucratic and shows a lack of trust in GPs and their teams to do what is best for patients.

‘It tries to micromanage practices and creates a laborious tick-box exercise, the very limited funding for which does not match up with the work involved, with a cap on funding that could limit people who could benefit from it.

‘Meanwhile, it is no use having such a scheme in general practice when receiving specialist services are so patchy across the country, with many having long waiting times or being already full.’

Mr Johnson previously preferred liberal health policies but performed a U-turn to a more top-down approach to the obesity crisis after his near fatal brush with Covid last year.

He began running and dieting to lose weight and says he is committed to helping the public do the same.

World Obesity Federation research in March found Covid deaths were times higher in countries where at least half of adults are overweight, and they have accounted for a staggering 90 per cent of global deaths.

Thousands of lives may have been saved if the population was slimmer, experts have said.

Mr Johnson said at the time: ‘Losing weight is hard, but making small changes can make a big difference.

‘Being overweight increases the risk of becoming ill with Covid. If we all do our bit, we can reduce our own health risks – but also help take pressure off the NHS.’