GPs have a duty to see patients face-to-face, medical regulator rules as it warns doctors could be sacked for spreading fake news

Doctors will have a duty to respect a patient’s wishes for face-to-face appointments under new guidance from the medical regulator.

It says medics should agree with a patient what type of appointment would best suit their ‘needs and circumstances’.

And they should ensure care is ‘safe and effective’ whether delivered face to face or remotely, the General Medical Council says.

The new directive is included in a revised version of the GMC’s core guidance for all doctors, known as ‘Good medical practice’. 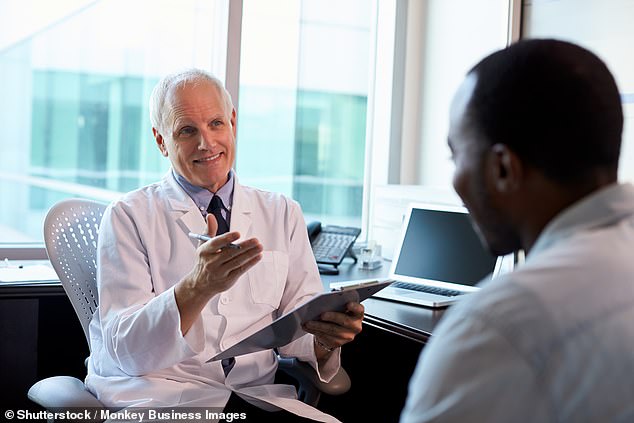 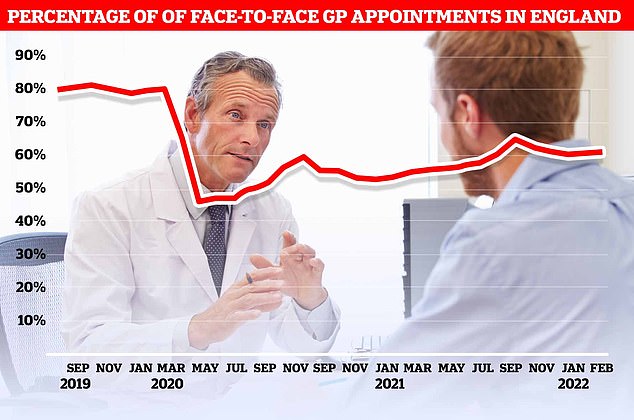 Graph shows: The percentage of GP appointments that were face-to-face in England from September 2019 to February 2022

The UK is the sick man of the world, with its healthcare system ranking second worst out of 19 similar countries, a report has warned.

With NHS waiting lists now standing at a record 6.2million, the report found Britain is ‘bumping along the bottom’ of the league table for a range of major health outcomes – with only the United States faring worse overall.

The Civitas think-tank analysed data from 2019 on 16 measures including life expectancy and survival rates for cancer, strokes and heart attacks.

The UK came bottom more often than any of the other countries, which include France, Spain, Germany and Japan.

But the US was ranked lower because it spends far more on health per capita, had the worst life expectancy and did not feature in all tables due to a lack of data.

Researchers say 6,500 lives a year could be saved in the UK if its performance on preventable diseases matched the average rate in other nations.

The only area the UK performs well in is helping diabetics avoid limb amputation, according to the first International Health Care Outcomes Index, which drew on data from the Organisation for Economic Cooperation and Development.

The UK was ranked 17th out of 19 countries for life expectancy, worst for stroke and heart attack survival, and 16th out of 18 for five types of cancer.

For example, stomach cancer five-year survival rates were 17th out of 19 at 20.7 per cent.

Study author Tim Knox said: ‘If what matters most to patients is the outcome of the treatment they will receive, then these findings should be of concern to all… Our uncritical worship of the NHS means that it is difficult to ask questions of our health service and how it ranks against those of other nations.’

It is the modern day equivalent of the Hippocratic Oath, outlining the professional values, knowledge and behaviours expected of UK doctors.

The 16-page document is being updated for the first time since 2013 to reflect societal changes, including sexual harassment and the increased use of social media.

A draft update is published today as part of a 12-week public consultation. It says doctors must not use digital communications channels to harass or mislead, and they should ‘make reasonable checks’ to avoid doing so.

Some doctors have large followings on the likes of Twitter and TikTok and use the platforms to promote products, give advice or express political views.

The guidelines say: ‘Whether you provide clinical care in a face-to-face setting, or through remote consultations via telephone, video-link, or online services, you must provide safe and effective care.

‘Where possible, you should agree with the patient which mode of consultation is most suitable to their individual needs and circumstances.

‘If you can’t provide safe care through the mode of consultation you are using, you should offer an alternative if possible or signpost to other services.’

It adds: ‘You must not abuse, discriminate against, bully, exploit, or harass anyone, or condone such behaviour by others.

‘This applies to all interactions, including on social media and networking sites.’

Around 80 per cent of GP appointments were face to face prior to the pandemic but this plummeted to just 47 per cent in April 2020 — it now stands at around 60 per cent.

Charlie Massey, chief executive of the GMC, said: ‘This update is intended to be relevant and helpful to medical professionals, and to benefit patients.

‘It is important our guidance reflects the reality of what doctors face and the cultures many are working in, and that it supports them to be able to do the best for their patients and colleagues.’

A Department of Health and Social Care spokesman said: ‘Patients should be able to see their GP in a way that they choose… We have made £520million available to improve access and expand general practice capacity.’

It’s also emerged GPs may follow dentists in cutting back on NHS work to charge more patients for private care.

Professor Martin Marshall, chairman of the Royal College of GPs, warned there is a ‘real threat’ general practice will go the way of dentistry.

Family doctors will vote next month on cutting their core opening hours from 8am-6.30pm to 9am-5pm and limit the number of appointments they fulfil. 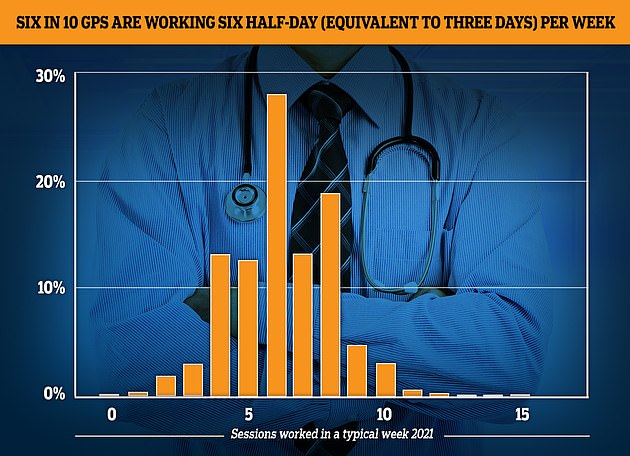 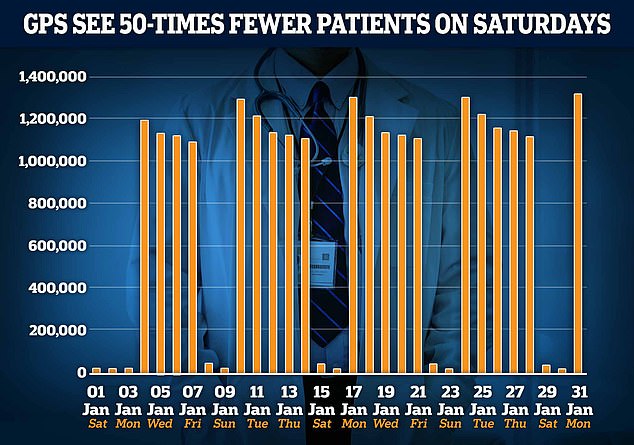 The graph shows the number of GP appointments per day in January. Since 2019, GPs have been asked to work evenings and weekends. But just 22,000 patients were seen on the average Saturday in January, compared to around 1.2million per week day

Doctors could be reprimanded over fake news tweets

Doctors could face regulatory action if they publish ‘misleading’ information on social media, according to proposed new guidance.

Tik Toks, tweets and Instagram posts could be scrutinised by the medical regulator if a doctor is reported for a breach.

The General Medical Council (GMC) is updating its Good Medical Practice guide – seen by some as a ‘modern Hippocratic Oath’.

The GMC document, which outlines professional values and behaviours expected of doctors working in the UK, has not been updated since 2013.

The latest version states that in public communications doctors must ‘be honest and trustworthy; make clear the limits of their knowledge; make reasonable checks to make sure any information given is not misleading; declare any conflicts of interest and maintain patient confidentiality’.

The update to the guidance, which is being put out for consultation, also aims to tackle workplace bullying.

Included in the guidance for the first time is a duty for doctors to act, or support others to act, if they become aware of workplace bullying, harassment or discrimination, as well as zero tolerance of sexual harassment.

Charlie Massey, chief executive of the GMC, said: ‘Good medical practice is the bedrock that helps guide ethical practice and supports doctors to provide the best possible care in a world of increasingly complex medicine.

‘This update is intended to be relevant and helpful to medical professionals, and to benefit patients, now and for years ahead.

‘There is a lot of evidence of the damage bad workplace cultures can do to patient safety and, ultimately, to the UK’s ability to retain the healthcare professionals it needs.

‘It is important our guidance reflects the reality of what doctors face and the cultures many are working in, and that it supports them to be able to do the best for their patients and for their colleagues. To achieve that we want to hear the views of as many people as possible on our proposed changes.’

Professor Marshall said: ‘The risk is we end up like the very worst of the US healthcare system where if you can pay, great, and if you can’t, you have a very sub-optimal system.

‘Or maybe like dentistry over the last 15 years, where a growing number have gone private.’

Speaking at a conference hosted by trade magazine Pulse, he added: ‘That seems to be a very real threat that we need to address.’

Meanwhile, former Health Secretary Jeremy Hunt told the same conference GPs should have personal assistants who do their paperwork so they can escape ‘two hours’ of admin each da.

He said it is going to be ‘very difficult’ to get more family doctors into the NHS in the short-term, which already has 1,500 fewer GPs than 2016.

So the health service needs to hire more staff to do doctors’ paperwork after each appointment so they can focus on seeing patients, Mr Hunt told a GP conference.

It comes amid a huge row over the working hours and conditions of family doctors and the ‘postcode lottery’ of bagging an appointment.

Patients have for years complained over struggling to access their GP, and in-person appointments have failed to bounce back to pre-pandemic levels.

But family doctors warn that the imbalance between the workload and workforce in the sector is only driving GPs — who earn £100,000 a year, on average — away from the profession.

Mr Hunt said ‘it’s going to be very difficult to get more GPs into the system in the short term’ because it takes seven years to train a family doctor.

‘We need to be looking at other people who can help GPs do their work, and GPs can leverage, who don’t take quite so long to get into the system,’ he said.

He pointed to the US where physicians, who are equivalent to family doctors, have a personal assistant (PA) ‘who works with them full-time who deals with all their admin after every appointment’.

The PAs don’t have a medical degree but may want to work in medicine or healthcare management in the future, Mr Hunt said.

‘That way, a GP doesn’t find at the end of a day of seeing 40 patients and then have two-hours of admin and that makes their job more rewarding,’ he said.

‘So we need to be a lot more innovative about ways to allow GPs to focus on their core work without having to be burdened by the admin,’ Mr Hunt added.

He noted that more family doctors were shifting to part-time work because doctors say it is ‘not possible to work at that level of intensity for five days a week’ and they are worried about getting tired, making mistakes and harming patients.

He said the traditional model of general practice is ‘broken’ and if it is to be at the ‘heart of the NHS’ then we have to ‘think about how we can reduce that pressure so that people don’t do the job and say ‘I can’t actually do more than three days a week’.’

Mr Hunt, chair of the Health and Social Care committee, said there was a need to ‘bring back the joy into the profession that a lot of older GPs remember’ because the workforce problems are a ‘retention issue rather than a recruitment issue’.

But he dismissed the idea that the new NHS England contract, which comes into effect in October and sets out that each group of GP practices must offer evening and weekend appointments, was infeasible.

Mr Hunt — rumoured to be making ‘discrete preparations’ in the event of a Tory leadership contest — also admitted he hasn’t ‘ruled out’ going back into frontline politics.