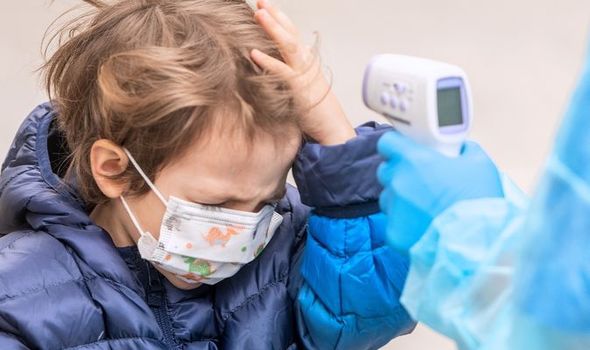 The encouraging data, from the UK Health Security Agency (UKHSA) is set to be officially released today. But its good news will come with a warning that, even though Omicron is milder, transmissibility is so high infections could still rocket to the point where large numbers end up in hospital. Prime Minister Boris Johnson was yesterday coming under increasing pressure to act after Wales followed Scotland’s lead and ushered in new Covid restrictions to start on Boxing Day.

But last night he was backed by data expertTimWhite who insisted: “What Boris Johnson has been saying is absolutely true. “There is still not enough concrete data on how much there will be an increase in hospitalisations and how serious those will be.”

As the PM “continued to study the data”, there were more positive developments yesterday. Two more studies – one in England, one in Scotland – also found Omicron was likely to be more mild than Delta.

And it was announced the Pfizer/BioNTech vaccine has been approved for vulnerable primary age children. The leaked findings from the UKHSA report indicate that people with Omicron are likely to suffer less serious symptoms than those with Delta.

This may be due to high levels of antibodies among people in Britain, thanks to the large numbers vaccinated and those who have been infected with the virus. But it may simply be because Omicron is intrinsically milder.

Chief Medical Officer Prof Chris Whitty has cautioned against too much optimism based on initial positive signs from South Africa. And the UKHSA’s view – leaked to Politico’s London Playbook – is that Omicron is not necessarily mild enough to avoid large numbers of hospitalisations.

The scientists also found evidence that for people who become severely ill with Omicron, there is still a high chance of hospitalisation and death. The UKHSA is expected to conclude that while two doses of Covid vaccine are not enough to offer strong protection, a booster dose significantly reduces the risk of both symptomatic infection and ending up in hospital.

Last night, it declined to comment until its findings are officially published today. Ministers were also tight-lipped. Asked about the data on BBC Radio 4’s Today, Health minister Gillian Keegan said: “I’m looking forward to receiving it. But we haven’t received it officially.”

As UK infection rates hit 106,122 yesterday, data expert Mr White said the high number was expected – and estimated a peak of between 170,000 and 180,000 daily infections next week before numbers start to come down again. He said: “We need to be cautious in having too many lockdowns and too many restrictions.” But he added: “We do know there’s a massive increase in cases.”

Meanwhile a Scotland-wide study found Omicron is associated with a two-thirds reduction in the risk of hospitalisation compared with Delta. And research from Imperial College London has indicated that people with PCR-confirmed Omicron are 15 to 20 per cent less likely to need to go to hospital.

However a separate study by the college yesterday found a steep rise in Omicron cases across the entire country, with the R rate at around 1.27 since the start of December. Preparations continued yesterday for a spike in hospitalisations.

It emerged the NHS may set up “field hospitals” in car parks, staffed partly by Army medical teams to help cope with a possible Omicron-driven surge in patients. Hospital canteens, offices and meeting rooms could also be turned into makeshift wards to give the health service “super-surge” extra capacity if needed in the coming weeks.

The Joint Committee on Vaccination and Immunisation (JCVI) announced a low-dose version of the vaccine has been approved for five to 11-year-olds in a clinical risk group or who are a household contact of someone who is immunosuppressed.

It also advised that some older children should be offered a booster. That good news came after Welsh First Minister Mark Drakeford announced that in Wales groups of no more than six people will be allowed to meet in pubs, cinemas and restaurants in from December 26.

Two metre social distancing rules will also return in public places and gatherings will be limited to 50 people outdoors and 30 indoors. Meanwhile £60 fines will be handed out to employees in Wales who go to the office when they could work from home.

The Welsh restrictions came the day after Scotland announced similar measures that have effectively cancelled Hogmany. And it heaped more pressure on Mr Johnson to impose more restrictions in England after Christmas.

The PM has ruled out any more restrictions on people’s freedoms before December 25 but said the Government is continuing to monitor the data “hour by hour”. Mr Johnson knows a mooted circuit-breaker lockdown could be devastating for businesses – particularly those in the hospitality sector who are already suffering as people stay away. It would also would ruin the New Year plans of millions.