How giving up that glass of wine could HALVE obesity levels: Analysts call for fat Brits to shave off 216 calories every day – so here’s how you could do it…

Cutting a large glass of wine, a pint of beer or a bar of chocolate from the diet of overweight Brits would halve obesity levels, experts say.

The UK is in the grips of a huge obesity crisis, with two in three adults carrying too much weight, costing the NHS £6billion every year.

Analysis by Nesta, which calls itself an ‘innovation agency for social good’, found that slashing just over 200 calories from the average overweight Brit’s diet could halve obesity rates. 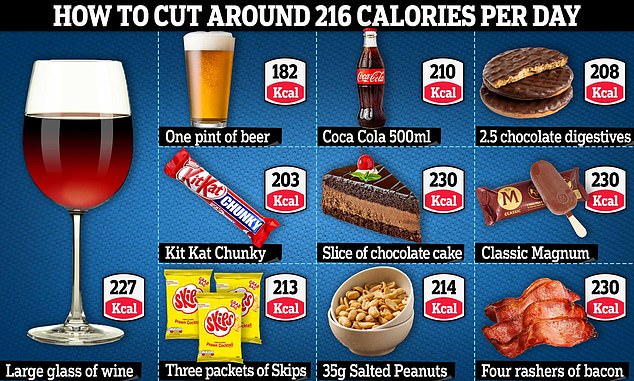 Analysis by Nesta, which calls itself an ‘innovation agency for social good’, found that slashing 216 calories from the average overweight Brit’s diet could halve obesity rates. The figure equates to around one large glass of wine (227), a pint of beer (182), 500ml of Coca Cola (210) or two-and-a-half McVitie’s Chocolate Digestive biscuits. The figure is in line with cutting out a slice of chocolate cake (230), three packets of Skips (213) or four rashers of bacon (230). It also equates to around a Kit Kat Chunky (203), a Classic Magnum (230) or a 35g serving of salted peanuts (214)

• Thirty grams of fibre a day. This is the same as eating all of the following: Five portions of fruit and vegetables, two whole-wheat cereal biscuits, two thick slices of wholemeal bread and a large baked potato with the skin on

• Have some dairy or dairy alternatives (such as soya drinks), choosing lower fat and lower sugar options

• Eat some beans, pulses, fish, eggs, meat and other proteins (including two portions of fish every week, one of which should be oily)

• Drink six to eight cups/glasses of water a day

Nesta is campaigning to halve the prevalence of obesity by 2030 — bringing levels back down to those in the early 1990s (14 per cent).

For comparison, 28 per cent of Brits have a BMI above 30 now.

Data scientist Elena Mariani and team calculated how many calories overweight Brits would need to cut from their diet to bring their obesity levels down to those from three decades ago.

Results showed that people would need to cut 216 calories per day, on average.

For men, the figure was 241 calories, while women would need to cut 190 calories — equating to around an 8.5 per cent reduction.

But the team urged people not to use these figures to set individual calorie reduction targets.

Instead, there should be population-level intervention to reformulate food, reduce junk food advertising and shift promotions towards healthier foods, they said.

These could include producers changing their recipes and portion sizes.

In a separate analysis, Nesta’s researchers said cakes, biscuits, chocolate and ready meals, along with crisps and savoury pastries, were contributing the most calories to the UK’s shopping baskets.

Reformulating these products to slash between five and 10 per cent of their calories would see the average person in the UK lose 38 calories from their diet each day.

Most Brits wouldn’t notice any change in the produce they consume as a result of this ‘stealth’ measure — but the overall effect on health is ‘significant’, Nesta said.

To achieve this, the Government should set mandated calorie reduction targets for the worst-offending foods and incentives companies to meet them.

It should also create an institution to oversee these efforts that would set targets, monitor compliance and issue fines when they go unmet.

A league table of supermarkets doing the most to make food healthier should be formed, by forcing shops to share their data, it added.

He said: ‘The number of people living with obesity has doubled in 30 years and that has very little to do with willpower or our personal choices.

‘Over three decades the food and drinks we buy have become bigger, cheaper, and far more calorific. 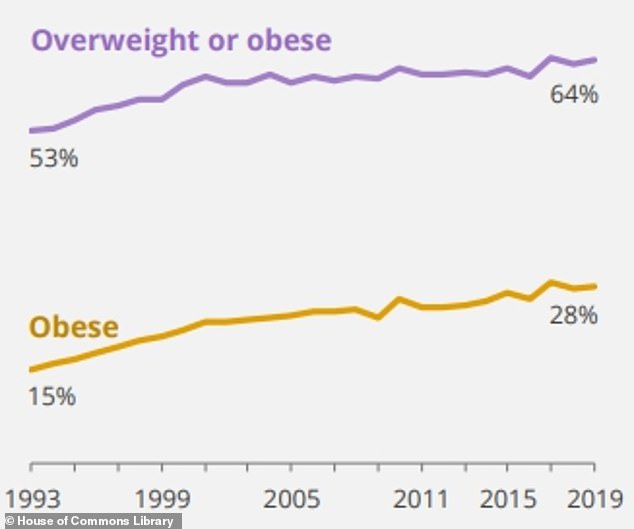 Nesta is campaigning to halve the prevalence of obesity by 2030 — bringing levels back down to those in the early 1990s, when they were half the levels seen now. Pictured: Graph showing obesity (yellow) and overweight and obesity (purple) rates since 1992 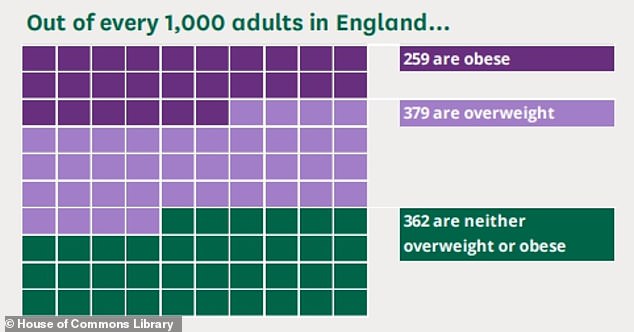 Official figures show that per 1,000 adults in England, more than a quarter are obese (dark purple) over one third are overweight (light purple) while just 36 per cent are not

‘There is a compelling case for the Government to invest seriously in prevention.

‘The NHS is under dreadful strain, partly due to capacity and investment but also because of demand. Prevention and capacity will need to be the twin pillars of public service restoration.

‘We know the mantra of willpower and personal responsibility is a dead end.

‘Reformulating a selected few food categories by a fairly small amount is good value and requires zero effort from the consumer.’

Nesta will use these findings to build a methodology to ‘assess the potential impact of different food environment interventions’.

Slimming down Britain would save the NHS around £3.25billion per year by boosting the number of healthy years people live, Nesta said.

Being overweight raises the risk of type 2 diabetes, some cancers, heart disease and stroke.

The obesity epidemic is estimated to cost the UK £54billion every year and take up £6.5billion of the NHS budget due to illnesses and disease linked to people’s weight. The figure is set to rise to £9.7billion per year by 2050, as the nation becomes even fatter.

A calorie is a way of measuring energy — either the amount contained in food or the amount used through activity.

People put on weight when they consume more calories than they burn off through daily activities. To lose weight, more calories need to be used than those taken in.