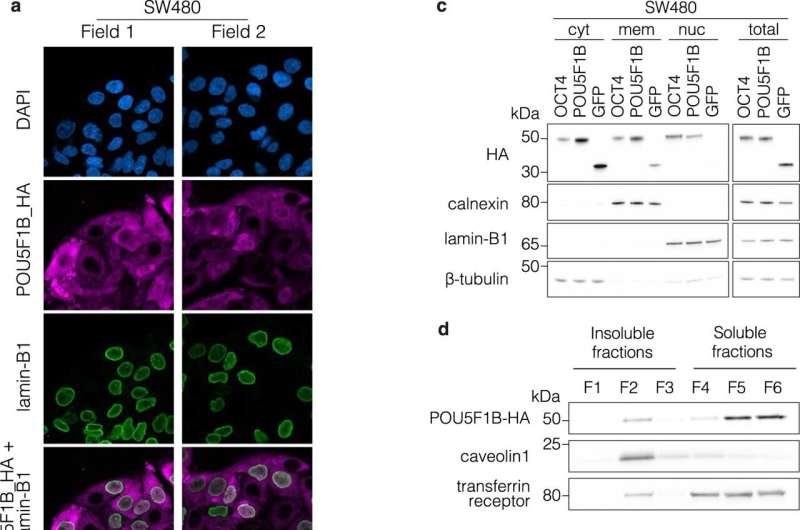 EPFL scientists have discovered a rare gene in the tumors of some colorectal cancer patients. This finding could lead to more accurate diagnoses and, eventually, personalized treatments that target the protein expressed by the gene.

Colorectal cancer is one of the most common forms of cancer in the Western world, especially in people over 50. Some 4,500 patients are diagnosed with it every year in Switzerland alone. Major therapeutic advancements in recent decades have drastically reduced the mortality rate, but scientists are still struggling to understand the molecular abnormalities that lead to tumor formation. And diagnosing colorectal cancer can be difficult, since symptoms generally don’t appear until the disease has progressed to an advanced stage—at which point effective treatment options are lacking.

Colorectal cancer occurs when alterations in the DNA of cells in the colon or rectum lining cause the cells to proliferate and become tumorous. To better understand the underlying mechanisms, a team of scientists at EPFL’s Laboratory of Virology and Genetics (Trono Lab) combed through data from a study in Denmark that analyzed the tumors of over 300 colorectal cancer patients. They found that some tumors contain a gene that promotes the growth and metastatic potential of cancer cells. Their findings were published in Nature Communications on 20 August 2022.

The Trono Lab scientists specialize in transposons, which are transposable elements of DNA that function a little like viruses. Transposons have always been a feature of the human genome and can affect the expression of certain kinds of genes. Using sophisticated analysis methods to investigate transposons in colorectal cancer cells, the research team found that the aberrant activation of transposons triggers the expression of the POU5F1B gene and that this gene expression was associated with the most severe tumors. “We now know that if the tumor of a colorectal cancer patient expresses the POU5F1B gene, there are likely to be serious consequences,” says Laia Simó Riudalbas, a scientist at the Trono Lab and the study’s lead author. “The survival rate for these patients is lower than for patients whose tumors don’t express the gene.”

Data from the Danish study show that the gene was present in 65% of the cancer cells but in only 3.8% of the surrounding non-cancerous tissue. “This was a particularly interesting, and unexpected, biological discovery—a surprise brought to us by virology,” says Simó Riudalbas. “We still don’t know what physiological purpose the gene serves, if any. It exists only in humans and large apes.” The scientists believe that the oncogenetic nature of POU5F1B comes from the fact that the protein it expresses tends to interact with other proteins that play an important role in the formation and mechanical functioning of cancer cells.

In addition to studying cells in vitro, Simó Riudalbas conducted experiments on lab mice to examine how POU5F1B functions as an oncogene. She transplanted two types of human cancer cells—some that express the gene, some that don’t—into mice. “It was very important for us to use mice in this study, because we need to contextualize the disease to answer very concrete questions,” she says. “Cancer cells that have been cultivated in vitro are significantly transformed, which makes them extremely different from real-world tumors. They also grow in completely different surroundings, without factors like hormonal stimulus, for example.” The lab’s experiments were approved by the cantonal veterinary authorities—as required of all animal testing in Switzerland—and carried out in accordance with EPFL’s strict regulations.

The Trono Lab’s findings have a number of implications for the treatment of cancer. First, if doctors are able to detect POU5F1B in tumor cells during a biopsy, they can proceed with a faster and more aggressive form of treatment. Second, since the protein expressed by the gene is rarely found in the tissue of “normal” adults—and given that some perfectly healthy people don’t have the gene at all—it’s a good candidate for highly targeted therapies. “The better we can target a drug to interact only with cancer cells, the less toxic it will be to the rest of the body,” says Simó Riudalbas. “The next step will be to identify methods for inhibiting POU5F1B.” What’s more, because the gene is expressed in other kinds of tumors, a treatment developed for colorectal cancer could eventually be used for other types of cancer, too.