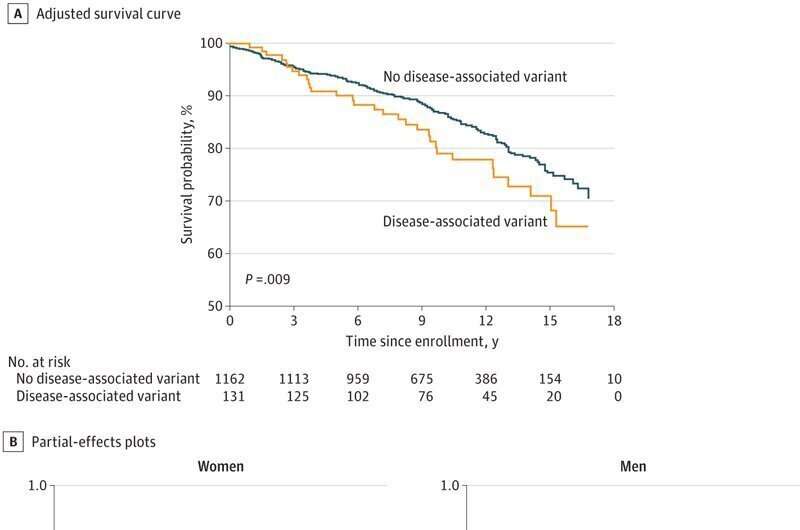 Younger patients with atrial fibrillation who had rare genetic variants associated with inherited cardiomyopathy and arrythmia syndromes were associated with a significantly higher rate of death than those without the variants, a Vanderbilt-led study has shown.

The research, “Mortality Among Patients with Early-Onset Atrial Fibrillation and Rare Variants in Cardiomyopathy and Arrhythmia Genes,” was recently published in JAMA Cardiology.

Atrial fibrillation, also known as AFib or AF, is the most common kind of cardiac arrhythmia, affecting more than 5 million Americans. The heart condition occurs when the upper chambers of the heart beat too quickly, resulting in irregular rhythm and a higher risk for blood clots that cause strokes.

The prospective, observational cohort study included 1,293 participants who had AF diagnosed before age 66 and received genetic testing. Patients with early onset AF who carried disease-associated variants had a 1.5-fold higher risk of mortality over 10 years, with an overall mortality rate of 24% compared to 16% for those without one of the variants.

“I think it’s an exciting, somewhat concerning finding,” said Zachary Yoneda, MD, MSCI, a fellow in the Division of Cardiovascular Medicine and an author of the study. “These variants, combined with age, are a marker of the severity of disease.”

Vanderbilt’s research is a companion paper to one published last fall in JAMA Cardiology that suggested genetic testing in patients with early onset AF can identify variants associated with more serious cardiomyopathy and arrhythmia syndromes that may otherwise remain undiagnosed. The younger the patient, the more likely genetic testing detected disease-associated rare variants in cardiomyopathy or arrhythmia genes.

“We haven’t identified all the genes that contribute to AF in young patients and families, but we know there are certain ones you don’t want to miss because of their potential for worse outcomes,” said senior author Ben Shoemaker, MD, MSCI, assistant professor of Medicine. “We hope the results of our study raise awareness that some patients with AF may benefit from genetic evaluation.”

The research may eventually lead to guidelines that younger patients with AF receive genetic testing, Yoneda said. Such genetic testing may work as a kind of early warning system, allowing interventions to begin early in such patients.