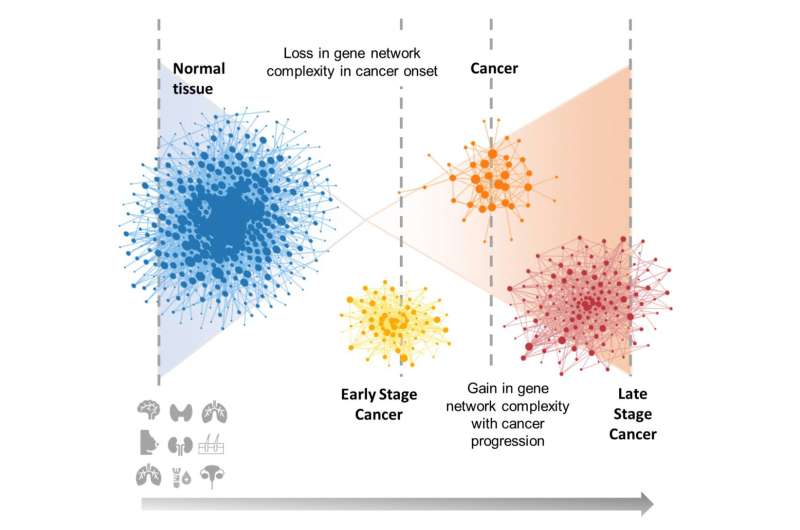 Cancer chemotherapy has undergone a paradigm shift in recent years with traditional treatments like broad-spectrum cytotoxic agents being complemented or replaced by drugs that target specific genes believed to drive the onset and progression of the disease.

This more personalized approach to chemotherapy became possible when genomic profiling of individual patient tumors led researchers to identify specific “cancer driver genes” that, when mutated or abnormally expressed, led to the onset and development of cancer.

Different types of cancer—like lung cancer versus breast cancer—and, to some extent, different patients diagnosed with the same cancer type—show variations in the cancer driver genes believed to be responsible for disease onset and progression. “For example, the therapeutic drug Herceptin is commonly used to treat breast cancer patients when its target gene, HER-2, is found to be over-expressed,” says John F. McDonald, professor in the School of Biological Sciences.

McDonald explains that, currently, the identification of potential targets for gene therapy relies almost exclusively on genomic analyses of tumors that identify cancer driver genes that are significantly over-expressed.

But in their latest study, McDonald and Bioinformatics Ph.D. student Zainab Arshad have found that another important class of genetic changes may be happening in places where scientists don’t normally look: the network of gene-gene interactions associated with cancer onset and progression.

“Genes and the proteins they encode do not operate in isolation from one another,” McDonald says. “Rather, they communicate with one another in a highly integrated network of interactions.”

“What I think is most remarkable about our findings is that the vast majority of changes—more than 90%—in the network of interactions accompanying cancer are not associated with genes displaying changes in their expression,” adds Arshad, co-author of the paper. “What this means is that genes playing a central role in bringing about changes in network structure associated with cancer—the ‘hub genes’—may be important new targets for gene therapy that can go undetected by gene expression analyses.”

Their research paper “Changes in gene-gene interactions associated with cancer onset and progression are largely independent of changes in gene expression” is published in the journal iScience.

In the study, Arshad and McDonald worked with samples of brain, thyroid, breast, lung adenocarcinoma, lung squamous cell carcinoma, skin, kidney, ovarian, and acute myeloid leukemia cancers—and they noticed differences in cell network structure for each of these cancers as they progressed from early to later stages.

When early-stage cancers develop, and stayed confined to their body tissue of origin, they noted a reduction in network complexity relative to normal pre-cursor cells. Normal, healthy cells are highly differentiated, but as they transition to cancer, “[T]hey go through a process of de-differentiation to a more primitive or stem cell-like state. It’s known from developmental biology that as cells transition from early embryonic stem cells to highly specialized fully differentiated cells, network complexity increases. What we see in the transition from normal to early-stage cancers is a reversal of this process,” McDonald explains.

McDonald says as the cancers progress to advanced stages, when they can spread or metastasize to other parts of the body, “[W]e observe re-establishment of high levels of network complexity, but the genes comprising the complex networks associated with advanced cancers are quite different from those comprising the complex networks associated with the precursor normal tissues.”