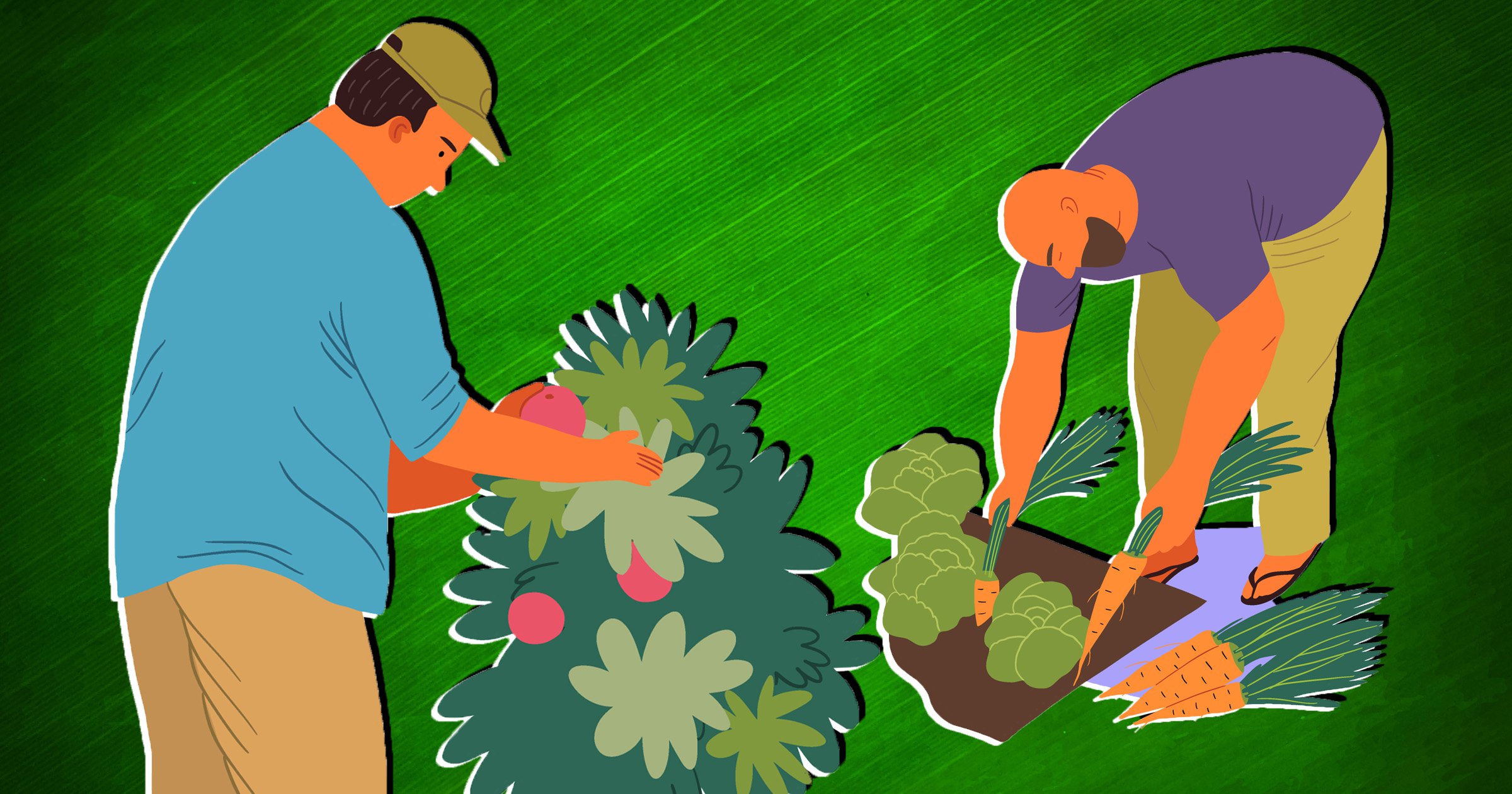 ‘I was terrified, confused, anxious, scared for myself and my wife,’ says Omar Hajo, a survivor of torture who now uses gardening as an outlet for his healing.

Born and raised in Damascus, Syria, into a large family of six children, he lived in a flat with a big garden and a farm outside the city.

Being outside in nature was always a part of his early life, and something Omar cherished as it was so linked to his family.

‘Our grandmother would come to see us every morning and we would all spend time in our garden or on the farm,’ he says.

‘She really enjoyed being outdoors surrounded by nature and she passed this love onto me and my siblings.

‘We would look forward to seeing her every morning, we were full of excitement and couldn’t wait to get into the garden.

‘My grandmother and I loved all the plants. We used to grow sweet corn and beans, and we also had apple, pear, peach and apricot trees, which we would climb up and have so much fun.

‘Once we picked the fruit and vegetables, we would take the produce back to my mum and she would cook up whatever we brought her.’

These ‘happy’ times were a big part of his childhood, and memories like planting his first cotton seed ‘will always stay’ with him.

As Omar grew up, he took on jobs abroad to avoid being conscripted into the army – however, when returning to Syria from Lebanon to see his wife in 2016, everything turned upside down.

He remembers: ‘I was at the Syrian border, at the immigration office. The officer asked me to come behind the counter and he said, “I knew there was something wrong about you, as soon as I saw you.”

‘He then asked me to empty my pockets and to give the car key to my wife.

‘I knew something bad was going to happen, and he arrested me for no reason. We both went straight into shock.

‘They wouldn’t tell me where they were taking me. He threatened my wife, saying that if she didn’t leave, he would arrest her as well.’

Omar says this experience isn’t uncommon and that he knew of people wrongly imprisoned at the boarder.

Tragically, it had already happened to a cousin of his and his children – to this day, he doesn’t know if they are alive.

‘I had no idea what was waiting for me, it was like a giant black hole, and I fell into it. They made me feel like I was nothing, absolutely worthless,’ he recalls.

‘The worst thing was, I knew no one could help me as you don’t have rights in Syria – the officials do whatever they want, to whoever they want, and they don’t need an excuse to throw you in the darkness of prison.’

Omar was taken to a high security prison, put in a single cell and strip-searched, and then given the ‘number nine’ as his label.

‘They take all your dignity away, so you don’t feel human anymore, it was humiliating.’

Two weeks were spent in a cell with no light and a concrete bed. Through the walls, he could hear people being tortured as their screams seeped in. He’d see people return from being tortured unable to walk.

He says: ‘The guards started to accuse me of funding terrorism and tortured me every day but at night I prayed. I tried to stay hopeful.

‘They moved me to another two security areas, and then onto the court where the judge found me not guilty, and I was free to go.

‘I was so relieved and couldn’t wait to be reunited with my wife, but I knew I couldn’t get too excited, not until I was out of the area. I left the prison and was on the way home when I was arrested again at a security checkpoint, and all my fears came flooding back.

‘The checkpoint officials didn’t think that my court papers were enough, and my name hadn’t yet been removed from the system.

‘I was taken back to prison but luckily, my father-in-law managed to make a deal with someone in the government and the next day they finally let me go.’

Traumatised and scared, he fled for London to meet a friend who suggested he make the move permanently and applied for asylum in January 2017.

‘When I arrived in London in January 2017, I had a bad officer at the airport. He said that I was telling him a fantasy story, and no matter how much I explained, he refused to believe what I had been through in Syria.

‘I was so panicked from what I had just experienced, and then the immigration officer made it worse.

‘Was I allowed to stay in the UK? Would they send me back? What would happen to me if they did? Is my wife safe? Would I be tortured again, or even killed?

‘I spent that night in the airport asking myself these questions, and the next day I was taken to a detention centre.

‘It gave me so many flashbacks of prison. More big walls, more locked doors, everything reminded me of what I had just been through in Syria.’

Though Omar was taken to a detention centre and was terrified he’d be subject to more abuse, his friend arrived to pick him up and gave him a home until his asylum was granted.

His GP then referred him to Freedom From Torture, an organisation that provides therapy to torture survivors.

This is when things finally started to shift for the better.

‘It took me a long time to settle down and to feel safe – I had a lot of flashbacks and nightmares – but when I started meeting people at FFT, it helped me to feel better as I was talking to people who had similar experiences.

‘This was a slow process but it really helped me.’

He says: ‘When I joined FFT, I quickly took up its gardening therapy, and at last, I started to feel like me again.

‘I was learning new things about gardening, and we planted vegetables, flowers and herbs. It was group work, we all engaged in gardening and together we built a safe zone.

‘Gardening brought back positive memories of my childhood, being free, climbing apple trees, and enjoying time with my family.

‘It really helped me process my trauma, stress and anxiety, and happiness started to come back into my life.

‘The gardening sessions gave me a safe, welcoming space without judgement, and I was able to share my story with other people who had been tortured.

‘Their stories made me feel like I was not alone – that there were other people who had been through similar injustices from their own governments and own people.

‘I replayed the experiences in my head and kept remembering what the prison guard said to me, “Don’t come back to Syria.”

‘I found the more time I spent gardening, the more it eased my stress and depression.’

Finding community through gardening restored Omar’s sense of hope, and has been vital in healing psychologically from the atrocities he faced.

It wasn’t until September 2019 that his wife could join him in UK – some years after his arrival.

Omar says: ‘I have learned and shared so much with the gardening group, and I will forever be grateful for the hope and happiness it has provided, and the link it gives me to the homeland I can’t return to.

‘Now, I look back at the very first plant I grew in the UK. It was a sunflower and I realise how significant that is. I’ve come to learn that sunflowers signify optimism, positivity and peace.

‘That’s exactly how I feel now.’

If you’ve been affected by the issues raised in the article, you can contact Freedom from Torture and donate to their life-changing work here. They run trauma-focused therapy to help with the effects of torture, such as counselling, gardening therapy, baking, sports, art, music and creative writing sessions.