From super smoothies to wonder drinks: Which high street green juice is good for you

The Duchess of Sussex says her favourite blend gives her a better morning boost than an espresso, Bodyguard actor Richard Madden is rarely seen in public without one, while M&S model Rosie Huntington-Whiteley claims ‘anything green’ goes into hers.

We are, of course, talking about green juice.

The trend, like all good health food fads, started in hipster juice bars in Los Angeles with Hollywood stars such as Gwyneth Paltrow claiming they were a fast-track to gleaming skin, better energy and a slimmer waist.

The theory, according to the wellness set, is that the grass-coloured beverages are an easy way to glug down a host of health-boosting vitamins and minerals, without the eye-watering sugar content of traditional fruit juice. 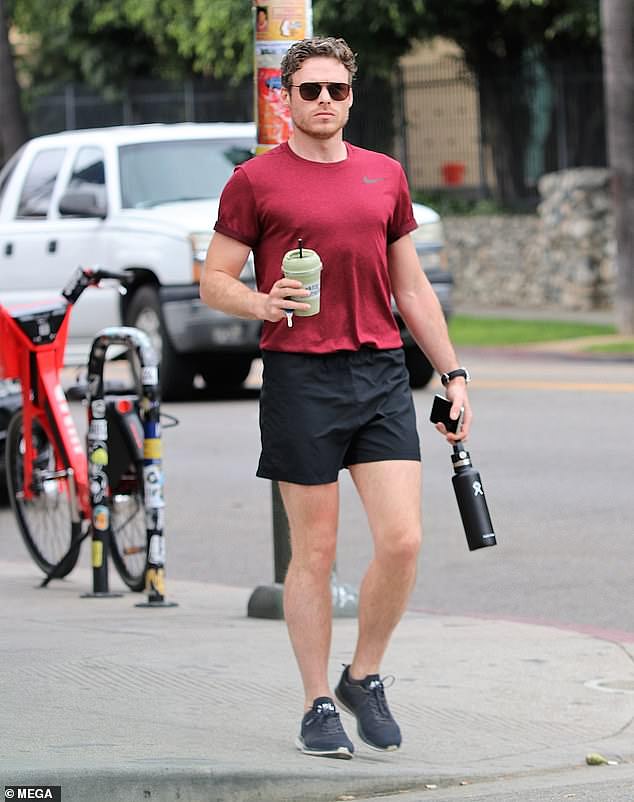 Green juice has long been touted as a way for celebrities and royals to get gleaming skin, higher levels of energy and slimmer physiques. Bodyguard star Richard Madden (pictured) was recently seen with one in had after a hitting the gym in Los Angeles

Drinks brands have run with the health-boosting hard sell, brandishing packaging with promises that one bottle will boost both your energy levels and your immune system. But are they ‘good’ for you, as the makers claim?

We took a closer look at some of the most popular green juices on the high street and asked dietician Renee McGregor for her verdict.

The bottle claims the drink is ‘crammed full of goodness’. It contains spinach, kale, broccoli along with apple, pear and banana.

Savse say their drink is high in Vitamin C ‘to set you up for the day ahead’. But there is 10mg more Vitamin C in an orange, says McGregor, who adds: ‘There’s about four teaspoons of sugar here – as much as a Cadbury’s Flake.’

When fruit is juiced, the sugar bound inside the fibres become ‘free’, and can cause unhealthy blood sugar spikes, related to an increased risk of type 2 diabetes.

Free sugar can also cause tooth decay. Health guidelines recommend we consume no more than 30g daily. If the fruit is eaten whole the sugars are absorbed into the bloodstream more slowly. 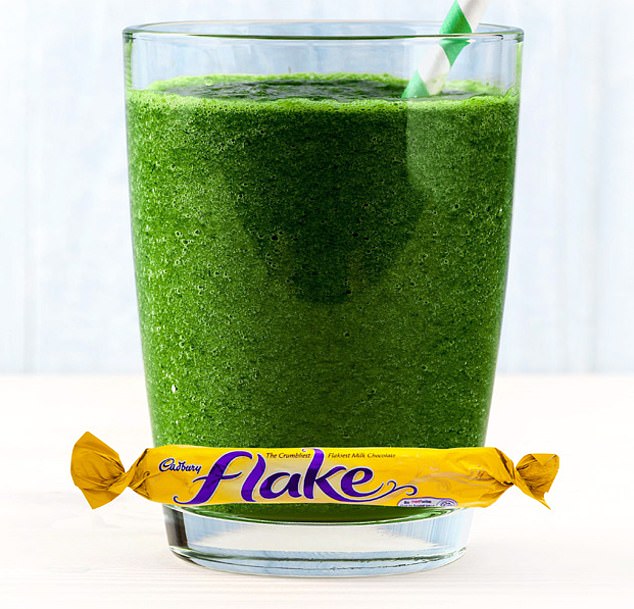 ‘It’s hard to find a healthier smoothie than this one,’ say the brand behind this drink made with spinach, avocado, cucumber and romaine lettuce. The makers also claim that added extract of a plant called guarana ‘reduces fatigue and improves focus.’ However McGregor says: ‘Guarana is a potent stimulant that can cause heart palpitations. It’s banned in sports drinks and should come with a warning.’ It also had more than five teaspoons of sugar in a single bottle – more than a Cadbury’s Wispa.

‘It also contains avocado, which has ‘good’ monounsaturated fat, and is high in Vitamin E, but if you’re watching your weight, consuming one of these smoothies a day will add an extra 150 calories to your daily intake. You’ll be more satisfied eating whole food.’

Taste test: It had a creamy texture and more balanced flavour. 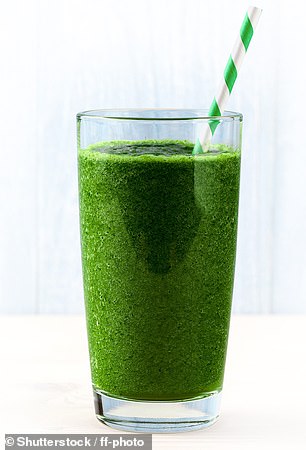 The theory is that grass-coloured beverages are an easy way to glug down a host of health-boosting vitamins and minerals, without the eye-watering sugar content of traditional fruit juice (stock image of green juice)

Described as a ‘turbo-charged smoothie’ containing vitamin C that, Naked claim, helps to support the immune system and protects our bodily cells from ‘stress’.

Wheatgrass is a staple in many green juices, as advocates claim it to be a good source of vitamins A, C, E, K. But you can also get all this (and more) from widely available watercress at a fraction of the price.

‘Spirulina is pushed as a health-boosting product that provides vitamins, minerals and antioxidants, but you need a minimum serving of 50g to reap any real benefits – this bottle contains a minute fraction of that,’ says McGregor.

‘Blue green algae has no proven nutritional benefit, and there’s more Vitamin C in half an orange.’

A single 250ml serving has almost seven teaspoons of ‘free’ sugar – almost an entire day’s recommended amount, and more than in a Mars bar, which has just over five teaspoons.

Taste test: This smoothie’s intense sweetness drowns out the other added ingredients.

The green ingredients, basil, pear, kale, spinach and lettuce, provide one tenth of the recommended daily intake of the mineral potassium, which Plenish say fights tiredness. It has marginally more potassium than a banana, thanks to the kale and spinach, and about the same amount of sugar.

‘This is the only green juice we tested that could possibly claim to be less sugary than fruit juices,’ says McGregor.

But McGregor says: ‘Food and drink do not affect the body’s tightly regulated internal PH level, which is always neutral.’

The smoothie brand supplements its apple, pear and cucumber drink with a range of B vitamins, supposedly to boost energy.

‘B vitamins – there are four types in this drink – will help maintain energy levels but you’ll get the same amount in a single egg, with none of the sugar,’ says McGregor.

‘It also contains five-and-a-half teaspoons of sugar – two-thirds of the daily limit. Eat an extra helping of broccoli at dinner for the same boost of Vitamin C, coupled with fibre which is protective against bowel cancer.’

Taste test: It’s like apple juice and has a water-like texture.

This contains spinach, aloe vera and flaxseeds – and added fibre. A serving contains nearly a quarter of your daily recommended intake, the equivalent of two apples.

McGregor says: ‘The fibre is substantial, and this comes with five teaspoons of free sugars, but if you aren’t eating much fresh produce then you could do worse than this.’