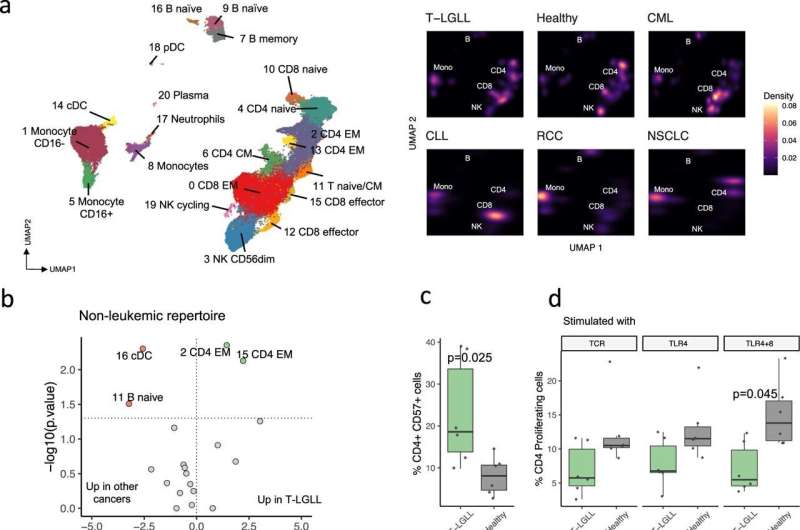 According to the latest international assessment, one in two persons will develop cancer at some point in their life. Blood cancers and other previously rare cancer types are also becoming increasingly common in the population. The study of rare cancers is important not only for improving the treatment of patients suffering from them but also because it can teach us about what makes other cancers vulnerable.

One such rare type of blood cancer is large granular lymphocyte (LGL) leukemia, where the body’s own immune cells, T cells, form the cancer cells. LGL leukemia is rarely fatal, but it causes several chronic symptoms, including an increased infection risk, anemia and joint pain.

The symptoms are thought to be caused by the LGL cancer cells attacking the body’s own tissues. In fact, LGL leukemia resembles autoimmune diseases. Current therapies are usually not curative, and patients’ symptoms return quickly.

“Our research group demonstrated 10 years ago that LGL cancer cells typically have a mutation in the STAT3 gene, a finding that is now used to diagnose this disease worldwide,” says Professor of Translational Hematology Satu Mustjoki from the University of Helsinki.

“Researchers have previously analyzed primarily LGL cancer cells, but we wondered whether other cells of the patient’s immune system could also have a role in this disease,” says Doctoral Researcher Jani Huuhtanen, LicMed, from the University of Helsinki and Aalto University.

Technical research solutions and research datasets in a key position

According to the researchers, separating normal cells associated with the immune system from blood cancer cells by traditional methods has proven to be extremely difficult, since, for example, in the case of LGL leukemia, cancer cells bear a very close resemblance to normal T cells found in blood.

New single-cell techniques have enabled a breakthrough that has made it possible for researchers to examine individual cells one at a time. With these techniques, the researchers were able, for the first time, to separate cancer cells from normal T cells and compare them with each other.

“Single-cell techniques open up entirely new avenues for research,” says Docent of Immunology Tiina Kelkka from the University of Helsinki.

“But we still needed a large patient cohort, which is hard to gather in rare diseases. Thanks to our research group’s international collaboration network, we were able to compile a dataset of almost 200 LGL leukemia patients’ samples from Finland, Germany, Italy, the U.S. and Japan,” she adds.

Locking on the immune system and novel therapies

The study, conducted with this extensive dataset and published in Nature Communications, proved the group’s assumptions to be correct: in LGL leukemia, the whole immune system, not just the LGL cancer cells, is clearly distinct from other cancers.

“The immune system in these patients is overactivated and keeps giving the tumor cells cues to keep growing as well as provides them with a favorable environment,” says Doctoral Researcher Dipabarna Bhattacharya from the University of Helsinki.

The findings suggest that current therapies for LGL leukemia should target the whole immune system, not only the cancer cells, to increase the quality of life of patients.