Last year, nine oncologists filed a lawsuit against the Anne Arundel Medical Center (AAMC), in Annapolis, Maryland, alleging that the hospital had fired them and had refused to allow them privileges to see their patients. 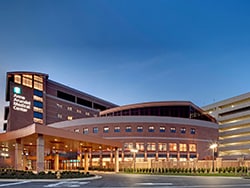 As reported at the time by Medscape Medical News, the oncologists said that the hospital chose profit over the needs of cancer patients, as it slashed oncology care services to cut costs.

The hospital denied any wrongdoing and alleged that the oncologists were not fired but that they had quit because they had been offered a more profitable opportunity.

At that time, the oncologists were not free to respond because of the ongoing litigation. But now that the lawsuit is over and the dust has settled, they are free to speak, and they contacted Medscape Medical News to tell their side of the story.

AAMC is a private, not-for-profit corporation that operates a large acute care hospital in Annapolis, Maryland. It is affiliated with Luminis Health, the parent company of the medical center. Until October 23, 2020, the nine oncologists were employed by the AA Physician Group.

They are all “highly respected, board certified oncologists and hematologists, with regional and, for some, national reputations in their medical specialty. The oncologists have had privileges at AAMC for many years and their capability as physicians is unquestioned,” according to the court filing made on behalf of the oncologists.

“Most of us have been in this town for decades,” said Carol Tweed, MD, who served as the unofficial spokesperson for the group. “Some of us are faculty members at Johns Hopkins, and this hospital’s oncology service was historically defined by our group.”

AAMC has a good reputation for providing high-quality medicine, “which is what brought many of us there in the first place,” Tweed told Medscape Medical News,

The situation began when the hospital began cutting services to curtail costs, which directly affected the delivery of oncology care, Tweed explained. “They were also creating a very toxic and difficult interpersonal work environment, and that made it difficult to do patient care,” she said. “We would go to them and let them know that we were having difficulty delivering optimal patient care because we didn’t have enough staff or the resources we needed for safety — and it got to the point where we were being ignored and our input was no longer welcome.”

Tweed explained that the administrators announced which patient-care services would be cut without asking for their input as to the safety of those decisions. “Perhaps the most notorious was when they shut down the oncology lab,” she said. “That lab to an oncologist/hematologist is like a scalpel to a surgeon. I need lab results immediately — I need to know if I can give chemotherapy right now, or do I need to hold a dose. The lab is intrinsic to oncology care anywhere.”

There was a continuing cascade of events, and the oncology group mulled over some ideas as to how to provide optimal patient care in this increasingly difficult environment. The decision they reached was to discuss running their own practice with the hospital administrators as a means of making up for the gaps that they were now having to contend with. “As physicians, we do a lot of non-billable work, such as patient education, nighttime rounds for our cancer patients, and so on, and we told them that we would continue doing that,” said Tweed. “They said that they would talk to us, but they didn’t.”

Within a week of sending their proposal for setting up their own practice, all nine physicians were fired. “Instead of arranging a discussion, we received termination letters,” she explained. “We were terminated without cause.”

As physicians, Tweed explained that they were by contract obligated to arbitrate. It dragged on for weeks and months, to the tune of hundreds of thousands of dollars in legal fees.

“The only thing we wanted was to be able to practice in this town,” said Tweed. “And what is important to know is that it was never for money, and that was never our motivation for wanting to form our own practice.”

Tweed was referring to the hospital’s allegations that the oncologists had left their employment for monetary gain. A statement given to Medscape Medical News by the Luminis Health Anne Arundel Medical Center at the time stated that “this dispute started after nine oncologists left their employment to join a for-profit organization. We tried repeatedly to remain aligned with them.”

The oncologists had resigned during the height of the coronavirus pandemic to “pursue lucrative contracts” with a “major pharmaceutical distribution,” according to Todd M. Reinecker, attorney for Luminis Health, as reported by the Capital Gazette (Medscape Medical News reached out to Reinecker at that time but did not receive a response).

This was not the case, Tweed emphasized. “We took a great financial risk in doing this for patient care. It was pretty disgusting that was in print from the hospital’s lawyer.”

“The doctors anticipated Luminis Health would be unable to recruit new physicians and be forced to continue to use their services,” Reinecker maintained.

In fact, the medical center hired seven new oncologists to replace them.

In filing their lawsuit, the nine oncologists put before the arbitrator the issue of the enforceability of the noncompete provision in their employment agreement, which prohibited the oncologists from working in the geographic area that includes the hospital. Their position was that the agreement was overly broad and thus unenforceable.

“We sign noncompete restrictive covenant contracts and we’re told that they are nonenforceable, and that’s the general discourse,” said Tweed. “Some states don’t even allow them. Well, we found out that they are very enforceable.”

The arbitrator eventually determined that three of the oncologists, including Tweed, had enforceable noncompete contracts.

“During the year or so while this was all going on, I would say that 90% of my patients wanted to stay with me,” said Tweed. “Patients were looking all over the place for us because, in many cases, the hospital did not tell them where to find us. In fact, they told us that we couldn’t contact the patients — they said it was ‘solicitation of a patient.’ “

In addition, the hospital continued to put more restrictions on the doctors. Six of the nine oncologists were able to continue practicing in Annapolis, and the remaining three will be able to join them in October 2022 when their noncompete contracts expire.

Now that the hospital has seen that there was a new oncology practice in town, Tweed noted, they changed their bylaws, and they now forbid hospital privileges to every physician in that group.

“The new bylaws do not restrict all private oncologists ― just specifically our group, which prevents us from being able to do rounds in the hospital,” said Tweed. “If I want to see any of my patients, I have to get a visitor badge.”

Tweed contends that this move was purely for financial and business reasons to keep the oncologists from their patients. This is the primary hospital where their patients would be admitted if they need hospital care. AAMC is the only hospital within a 15-mile radius, and it serves as the regional hospital for the greater Annapolis area and for many Eastern Shore communities, whose hospitals do not offer various specialty services, such as oncology care.

“This was done purely because they were finance focused and not patient care focused,” Tweed emphasized. “We basically had to bargain with the hospital to let us even transfuse our patients.”

Telemedicine Added to the Mix

Yet another restriction that surfaced during the arbitration involved telemedicine. Tweed explained that as soon as the hospital realized that the three oncologists planned to stay in town and that their patients wanted to continue receiving care with them, they put telemedicine on the chopping block.

As if the restrictions and removal of hospital privileges wasn’t enough, the hospital decided to go after telemedicine during arbitration, Tweed said. If patients lived in any of the restricted ZIP codes, they were forbidden to conduct virtual visits with them.

“This isn’t ethical, but they tried to do everything to keep us from seeing our patients,” she said. “This is patient choice, but they were telling patients that if you live in any of these ZIP codes, you cannot do telemedicine if you choose Carol Tweed as your doctor,” Tweed said.

Of course, a patient isn’t bound by the arbitration and can see any doctor, but Tweed explained that the hospital threatened to come after her with a lawsuit.

One of the other physicians, Stuart Selonick, MD, told Medscape Medical News that he wasn’t quite sure how the idea of prohibiting telemedicine even came up. “There is little precedence for telemedicine in the US,” he said. “They’ve extended the restrictions to telemedicine, and this is a new legal boundary, and it was new to the judge. But they made it part of the definition of the restrictive covenant. But to fight it would mean another lawsuit,” he added.

A separate lawsuit had previously been filed in an effort to regain hospital privileges, but the decision was made not to continue, owing to the amount of litigation it would involve.

“We can’t spend a lifetime and millions on another legal battle,” said Tweed. “We don’t have the corporate legal pool that the hospital has, and they know it.”

Patients have written endless letters supporting the doctors, Tweed said, but to no avail, as the hospital did not change course.

Litigation is now completed, and in about 9 months, the remaining three physicians will be able to rejoin their colleagues and put this behind them as best they can.

“The hospital knows that they harmed patient care for financial gain ― that’s the tagline,” said Tweed.

Approached for a response, Justin McLeod, spokesperson for Luminis Health, said that they are “pleased with the outcome of the case and the resolution agreed to by both sides. This agreement ensures patient access and continuity of care for patients with cancer. These providers have access to their patients’ electronic medical records, can order outpatient services, and attend quarterly cancer committee meetings with other providers.

“Our focus is the future of cancer care for our community. Luminis Health Anne Arundel Medical Center is committed to providing patients with high quality, comprehensive cancer care that is accessible to all,” he added.