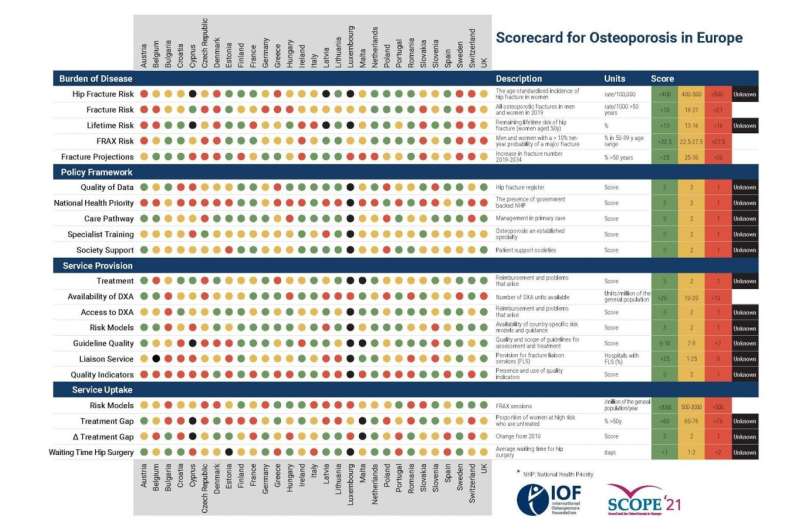 A new report by the International Osteoporosis Foundation (IOF) draws attention to the burden of osteoporosis and the gaps and inequalities in the provision of primary and secondary prevention of fractures due to osteoporosis across Europe. ‘SCOPE 2021: a new scorecard for osteoporosis in Europe’ provides detailed findings for the 27 countries of the European Union as well as Switzerland and the United Kingdom (referred to as ‘EU27+2’), covering key indicators for four domains: burden of disease, policy framework, service provision and service uptake.

“Osteoporosis is a major concern in Europe as it results in 4.3 million fragility fractures and health care costs in excess of €56 billion annually. Seeking to prioritize osteoporosis prevention in the EU27+2 countries, the SCOPE 2021 report has tracked key indicators of burden and service uptake which will help Europeans measure how well their country is able to provide quality care, including access to risk assessment and medications. It also provides a new benchmark to follow trends in osteoporosis management, and to measure future progress.”

Osteoporosis is a progressive chronic disease that causes bones to become fragile and weak, leaving individuals at high risk of fragility fractures. Such fractures can have a serious impact on the sufferer, leading to pain, long-term disability and even premature death. In the EU27+2, there were estimated to be more than a quarter of a million fragility fracture-related deaths in 2019. This number is comparable to, or exceeds, other common causes of death such as lung cancer, diabetes, or chronic lower respiratory diseases.

SCOPE 2021 examined the burden of osteoporosis and fragility fractures in the EU27+2 countries, finding:

Service provision lags in many countries

SCOPE 2021 also found notable inadequacies in service provision that hinder many Europeans from getting the care they need to prevent osteoporosis and fragility fractures:

Among the most startling findings of SCOPE 2021 is the enormous ‘treatment gap’ which is leaving the most high risk individuals unprotected against fragility fractures. Other measures of service uptake were also found to be suboptimal:

“This important publication clearly shows that osteoporosis is a major health care burden in Europe, resulting in enormous, and growing, costs to national health care systems. As well as revealing wide discrepancies in service provision and uptake within the EU, SCOPE has exposed an unacceptable treatment gap and poor provision of post-fracture care programs to prevent secondary fractures. Despite the wide availability of treatments to prevent fractures, only a minority of patients at high risk receive treatment even after their first fracture.”