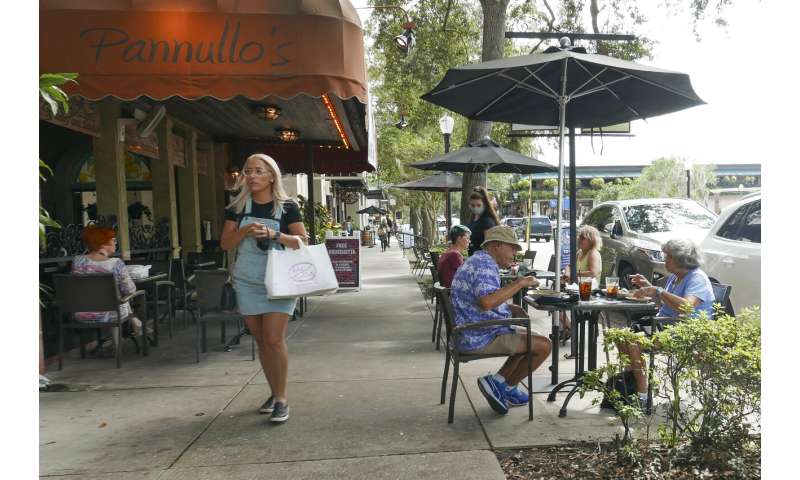 As the summer coronavirus spike in Sunbelt states subsides, Florida has gone the furthest in lifting restrictions, especially on restaurants where the burden of ensuring safety has shifted to business owners and residents—raising concerns of a resurgence.

In his drive to return the state to normalcy, Republican Gov. Ron DeSantis lifted limits on indoor seating at restaurants, saying they can operate at 100% in cities and counties with no restrictions and that other local governments with some restrictions can’t limit indoor seating by more than 50%.

In some of Florida’s touristy neighborhoods, patrons have since been flocking to bars and restaurants, filling terraces, defying mask orders—drawing mixed reactions from business owners and other customers.

“We’re generally concerned that we’re going to find ourselves on the other side of an inverted curve and erasing all the progress we’ve made,” said Albert Garcia, chairman of the Wynwood Business improvement district, which represents 50 blocks of restaurants and bars in Miami’s trendy arts district.

Other Sunbelt states that have been COVID-19 hot spots over the summer haven’t gone as far. In Texas, bars have been closed since June under Republican Gov. Greg Abbott’s orders, and restaurants can hold up to 75% of their capacity, while face covers are required throughout the state. And in Arizona, restaurants and bars must run at half-capacity. 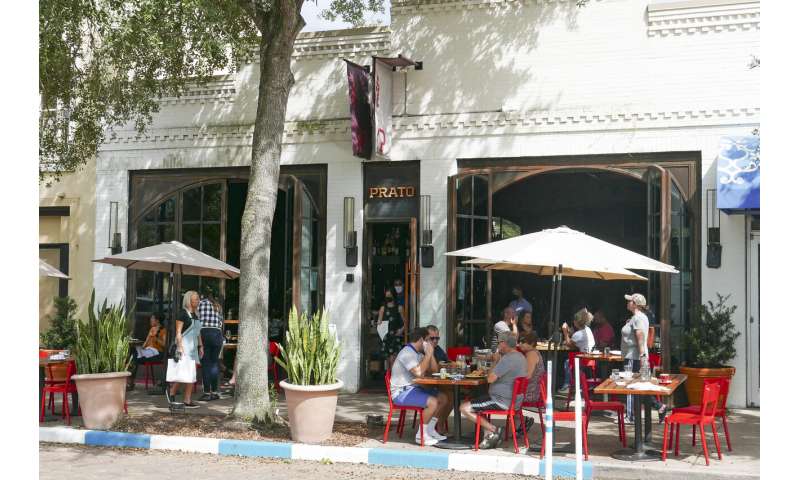 Though Florida’s governor generally wears a mask when arriving at public appearances and has allowed municipalities to impose mask rules, he has declined to impose a statewide mandate. And on Sept. 25, as the state entered a Phase 3 reopening, he barred municipalities from collecting fines for mask violations.

DeSantis says contact tracing has not shown restaurants to be substantial sources of spread.

“I am confident that these restaurants want to have safe environments,” he said earlier this week. “And I’m also confident that as a consumer, if you don’t go and you don’t think they’re taking precautions, then obviously you’re going to take your business elsewhere.”

Craig O’Keefe, managing partner for Johnnie Brown’s and Lionfish in Delray Beach, said they’re now accommodating as many people as they did before the pandemic began and he’s hired eight people in the past few days. Demand surged last weekend. 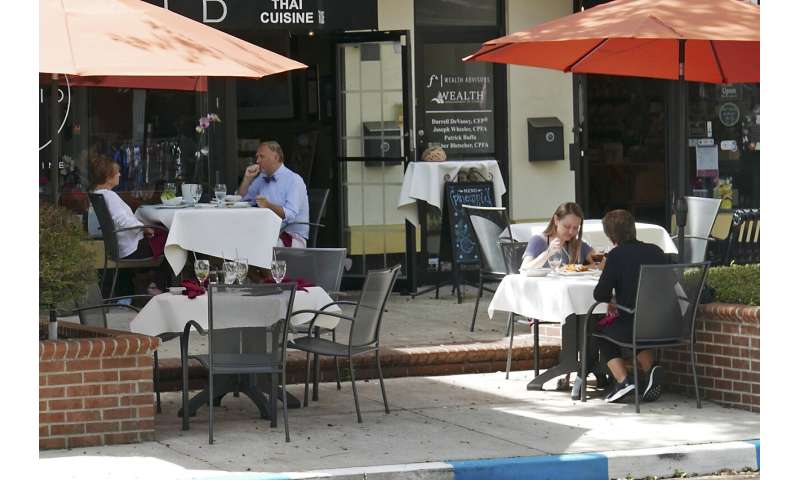 “It was like someone turned the light on,” O’Keefe said. “It was great to see people out smiling, having fun getting to see each other. It’s been a really nice thing to get people back to work.”

Shutdowns and restrictions have battered Florida’s economy, leaving hundreds of thousands unemployed in the tourist-dependent state.

Earlier this week, The Walt Disney Co. announced it would lay off 28,000 workers in its theme parks division even after the Florida parks were allowed to reopen this summer.

Florida has had more than 14,500 deaths from the pandemic, ranking 12th per capita among states. Its outbreak peaked in the summer, seeing as many as 12,000-15,000 cases added per day. New cases, positivity rates, hospitalizations and deaths have been on a downward trend for several weeks. Still, the state has added 2,000 to 3,000 cases per day over the past couple of weeks. 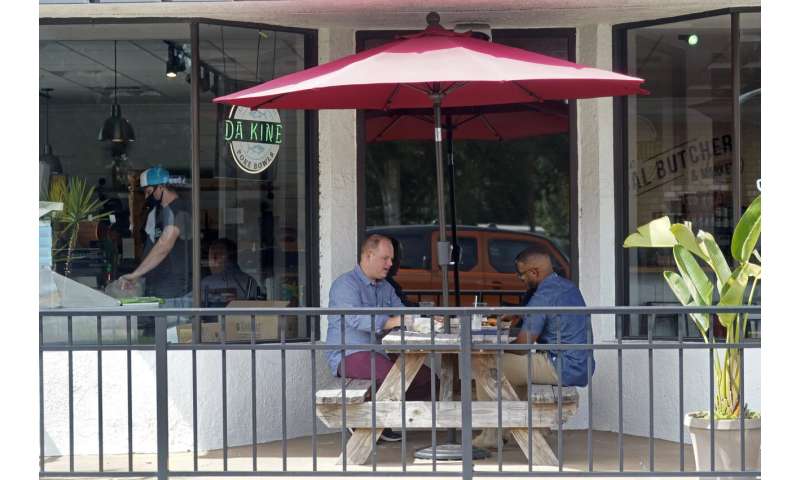 Dr. Peter Hotez, an infectious disease specialist at the Baylor College of Medicine and co-director of Texas Children’s Hospital Center for Vaccine Development, said that loosening restrictions in Florida is a “mistake” that could increase community transmission at a time when teachers are being summoned back to school.

“It really sends the message either implicitly or explicitly that it’s OK. It’s back to normal now, and it’s not the case. We are still in a very serious situation,” Dr. Hotez told members of the Congressional Hispanic Caucus this week.

In South Florida, Miami-Dade County Mayor Carlos Gimenez said Friday that he was concerned over a slight uptick in county hospitalizations in recent days and warned people not to let their guard down, using President Donald Trump’s COVID-19 diagnosis as an example that the virus is highly contagious.

Gimenez has been consulting with attorneys and staff on what rules local governments could continue to enforce without violating new state orders. The county plans to limit many restaurants to 50% indoor capacity and continue requiring masks in public. 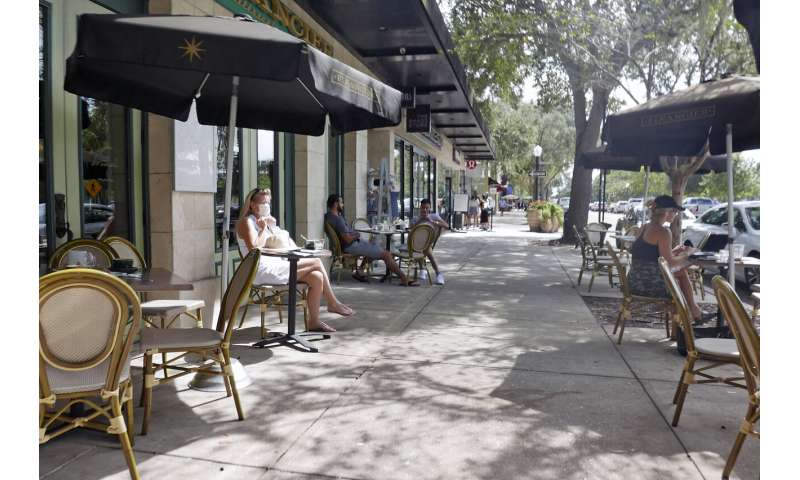 An 11 p.m. curfew is keeping a lid on nightlife, and the county even restricts loud music at venues so people don’t have to shout, which is believed to spread the virus more easily.

“I think there’s a lot of confusion because people thought that was it—everything is open,” Gimenez told reporters. “We are still not out of the woods.”

Omer Horev co-owns Pura Vida, a Miami chain of coffee shops with locations in iconic South Beach, the Design District near downtown and at the University of Miami. Horev said he isn’t relaxing any rules at his businesses. Store managers told him some customers have been defying their mask rules after DeSantis’ new order and he hasn’t seen any local enforcement in the past week.

“We are in this gray area where you don’t know what is enforced,” he said. “I feel safe; I am OK with it, as long as restaurant operators such as us and others do the right thing in keeping the employees and guests safe.” 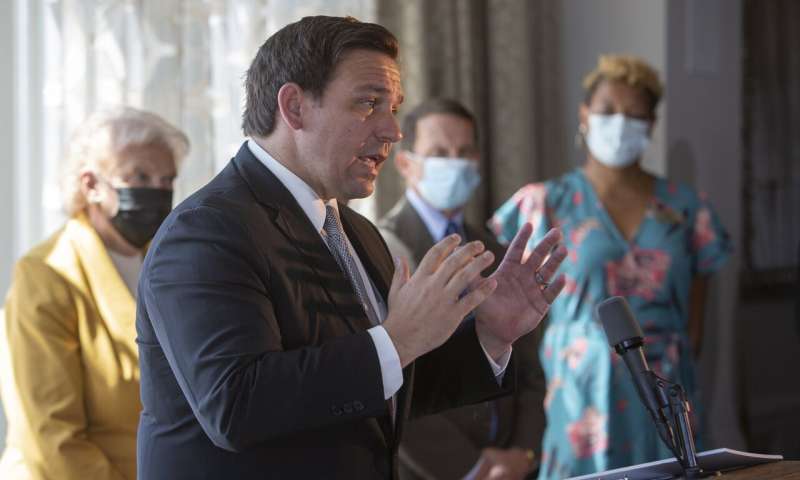 In Tallahassee, Denise Barber, a 65-year-old retired state worker, used to dine out almost every day before the pandemic. She’s now comfortable dining out again, but only at places being more cautious than required. She’ll check a restaurant’s Facebook page or call them to verify their rules.