Swiss scientists fertilised hundreds of trout eggs with fresh sperm or that which had been cryopreserved and then thawed.

The team found no difference in fertilisation, growth or survival rates between the two techniques during the embryo stage.

After hatching, however, the larvae produced from frozen sperm developed 4.2 per cent slower, the study found.

Although unclear why this occurred, sperm freezing has been linked to ‘cryodamage’. This is thought to be brought on by ‘physico-chemical stress’, which may damage DNA.

Fertility experts say men should not be ‘freaked out’ by the study, adding ‘we would probably know’ if cryopreservation was a cause for concern. 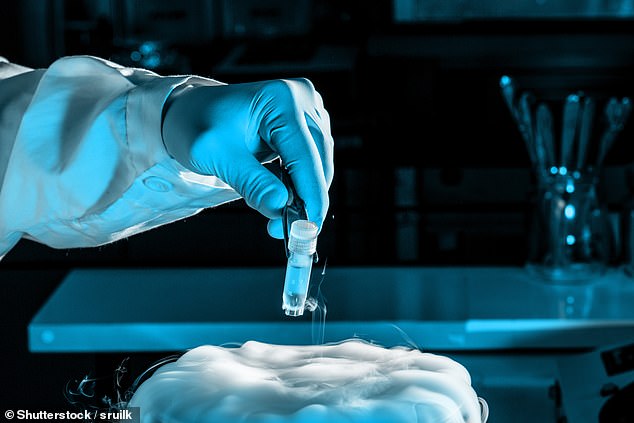 The research was carried out by the University of Lausanne and led by Professor Claus Wedekind.

Sperm freezing is ‘routinely carried out in assisted reproduction, livestock and wildlife management’, the scientists wrote in the journal Proceedings of the Royal Society B.

The technique enables men to freeze their sperm for future use or donate it to someone else’s fertility treatment.

It may be particularly appealing for those who are facing medical treatment that may affect their fertility, such as chemotherapy.

Men who are about to have a vasectomy and worry they could change their mind about having children may also benefit.

Once thawed, the sperm has to be used alongside a fertility treatment, like IVF or a intracytoplasmic sperm injection (ICSI).

ICSI involves doctors injecting a single sperm into an egg. This is different to IVF, which mixes sperm with eggs and allows them to fertilise.

According to the Human Fertilisation & Embryology Authority, sperm freezing is ‘very safe’.

The organisation adds: ‘We’re not aware of any risks to patients or children from using frozen sperm.’

However, the Swiss scientists argue studies into cryopreservation’s safety have thrown up mixed results.

One trial in mice found egg freezing produces ‘seemingly normal offspring’, while another suggested they have shorter lifespans and a higher risk of tumours.

Mammals are particularly challenging to study due to them not producing many offspring, the scientists said.

If the effects of cryopreservation are small, large numbers of offspring are required to uncover them.

To overcome these setbacks, the scientists looked at brown trout. Forty males were ‘stripped’ for ‘semen’, known as milt, some of which was frozen.

A total of 960 eggs were collected from 10 females. Half were fertilised from frozen sperm and the remainder from fresh.

Fertilisation rates were ‘overall very high’, and did not differ between the fresh and frozen sperm. This was measured by a spinal cord being visible in the developing embryo.

However, the offspring produced from frozen sperm grew on average 4.2 per cent slower than those fertilised with fresh swimmers.

The results also showed sperm speed and movement was worse after freezing.

The scientists worry cryopreservation affects the growth of offspring, which may be ‘easily overlooked because it only manifests at later developmental stages’.

But Professor Allan Pacey, from the University of Sheffield, urges men not to be put off.

‘[The scientists] make some interesting points but there’s a huge difference between how humans and fish reproduce,’ he told MailOnline.

‘We have been freezing human sperm since 1952 and don’t know of any major dramas with child health in that time.

‘I wouldn’t want anyone to be freaked out by the thought of freezing sperm.

‘If there was a big common problem we probably would have come across it by now.’

Professor Pacey pointed out many of the men who have their sperm frozen are undergoing chemo, with cryopreservation offering them an opportunity to be fathers down the line.

‘Most guys with cancer would accept a 4.2 per cent slower growing embryo,’ he said.

Professor Charles Kingsland, clinical director of CARE Fertility, added: ‘This is an interesting study on a small cohort of Brown trout.

‘Their offspring were shown to be slightly developmentally delayed when they were a product of frozen sperm compared with those developed using fresh sperm.

‘However, this study has not been replicated significantly in mammals and crucially in humans where frozen sperm has been used in various therapies for many years with reassuring outcomes.’

HOW DO SPERM MOVE?

Sperm are vital in human reproduction and the motility of the male cells is crucial.

In order to help the sperm cells move, they evolved a ‘tail’ which is called  a flagellum.

Sperms’ tails play a critical role in their ability to swim and consequently fertilise an egg.

Sperm are vital in human reproduction and the motility of the male cells is crucial. Sperms’ tails play a critical role in their ability to swim and consequently fertilise an egg

Sperm tails consist of around 1,000 building blocks, including structures known as tubulins, which form long tubes.

Attached to these tubes are moving molecules called motorproteins.

These pull and bend sperm tails, enabling them to swim.

The movement of the tail is powered by a mitochondria, the powerhouse of a cell, which produces energy.