A woman who had her fallopian tubes removed gave birth to a healthy, viable baby in the first such documented case ever.

Elizabeth Kough, of Kearney, Missouri, had both of the tubes that connect her ovaries to her uterus removed in 2015 after having three children.

However, the 39-year-old started feeling the tell-tale signs of pregnancy last year.

After taking a pregnancy test, and visiting her local hospital for an ultrasound, it was confirmed that she was pregnant with her fourth child.

Benjamin was born in March weighing seven pounds and six ounces – and doctors even checked during delivery to confirm that the tubes had been removed.

Doctors told Good Morning America that there have only been three other such cases recorded in medical literature, but this is the first that resulted in a healthy birth. 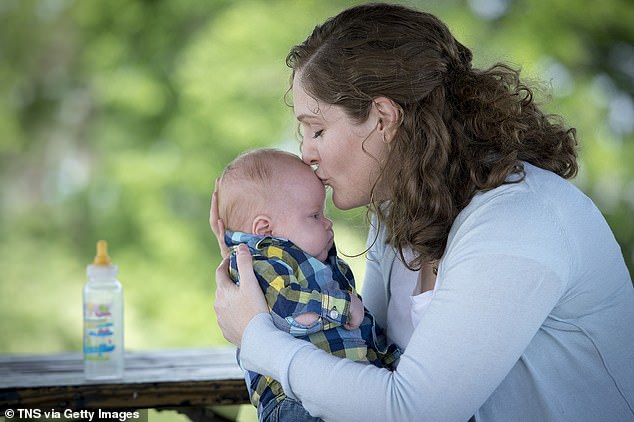 Elizabeth Kough, 39, of Kearney, Missouri, had both of her fallopian tubes removed in 2015. Pictured: Kough with her son, Benjamin 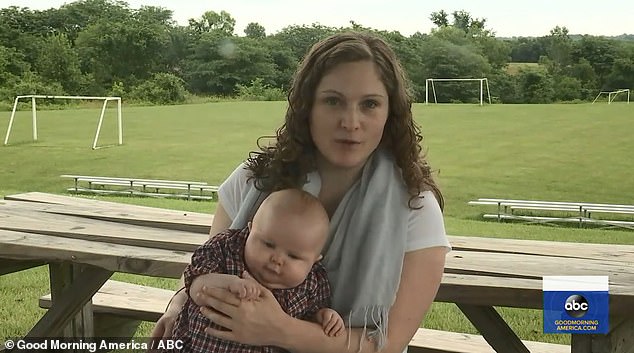 Last year, Kough discovered she was pregnant, even though the procedure is a nearly foolproof form of contraception. Pictured: Kough with her son, Benjamin

Kough told Good Morning America that there were several reasons she decided to have her fallopian tubes removed.

One is that the procedure, known as a bilateral salpingectomy, has been shown to reduce the risk of ovarian cancer, which runs in Kough’s family.

‘I also hit age 35 and they medically say at that age pregnancy becomes more high-risk,’ she told the news program.

‘I was also divorced and single and had three children, which is quite a blessing for a family, but I thought that was probably enough.’

The operation, which Kough had done by her OB-GYN in Virginia – where she used to live – is usually a nearly foolproof method of contraception.

Normally when a woman becomes pregnant the egg is fertilised in the fallopian tube and then travels into the womb to grow into an embryo.

Although rare, there are records of women getting pregnant even though they don’t have fallopian tubes, which carry eggs out of the ovaries.

Davor Jurkovic, a consultant gynaecologist at University College Hospital in London, England, revealed it is not possible to completely remove the fallopian tubes during surgery.

He said: ‘It is not possible to remove the tubes completely at surgery as a part of them is passing through the uterine muscle and therefore it has to be left behind.

‘It is very likely that the end of one of her tubes has re-opened after surgery.

‘This would have allowed the sperm to enter the abdominal cavity and fertilise the egg after it had been released from the ovary.’

Other scientific papers have suggested surgery could leave small openings which join the ovary and womb in a way other than the fallopian tube, which could allow sperm to leak out of the uterus, or eggs to move into it – either of which could result in pregnancy.

Dr Hana Visnova, director at the IVF Cube fertility clinic in Prague, said an egg may be able to bypass the space between an ovary and uterus if the two were close together and the tube removal wound didn’t properly heal after surgery.

But last year, Kough, who was now living in Missouri and in a new relationship, began feeling symptoms of pregnancy.

Although she assumed it wasn’t likely, she decided to take a home pregnancy test anyway.

When the result came back positive, she immediately called her boyfriend, who drove her to the local hospital.

Doctors performed a blood test and an ultrasound, and confirmed that Kough was indeed pregnant.

In most cases, this would result in an ectopic pregnancy, which is when the fertilized egg attaches itself outside of the womb, but in Kough’s case, the baby was developing inside of the uterus.

Her doctors at Meritas Health in Kansas City were unable to explain it.

Dr Dawn Heizman, a board-certified OB-GYN at Meritas Health, who did not treat Kough but reviewed her case, told Good Morning America: ‘None of us have encountered this before.’

The team confirmed that Kough had her fallopian tubes removed and hadn’t gotten pregnant via in-vitro fertilization.

They believe that the egg traveled to one of the uterine horns, where the fallopian tube used to be attached, and passed through to a fistula to end up in the uterus.

Dr Heizman said she has only come across three other cases in medical literature of a pregnancy following the removal of both fallopian tubes.

The first case that appeared in English-language journals was published in 2005 and the second case was in 2008.

However, Kough’s is the only case in which the pregnancy led to the birth of a healthy and viable baby.

‘The fact that Elizabeth delivered a healthy boy with all of these very rare circumstances, it’s like a miracle,’ Dr Heizman told Good Morning America. ‘This was impressive.’ 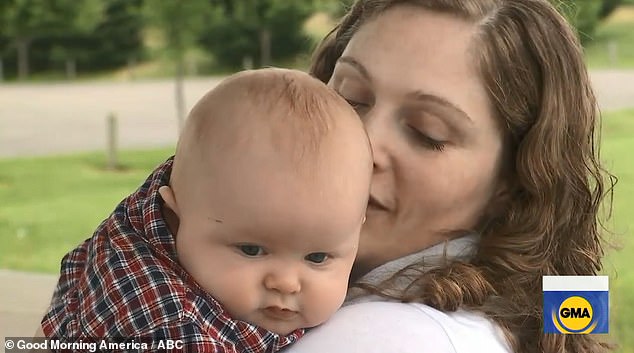 Her son, Benjamin, was born via C-section in March weighing seven pounds and six ounces. Pictured: Kough with Benjamin

Despite the high-risk nature of Kough’s pregnancy, because she is over 35, it proceeded with no complications.

The doctors even checked during the delivery and confirmed again that the fallopian tube had been removed.

Kough told Good Morning America that she has since returned to work and her boyfriend is a stay-at-home father.

‘I don’t want to spoil him too much so I don’t call him a miracle, but my youngest calls him my angel baby,’ she said. ‘When I look at him I feel really blessed to have him because I know the chances of him being here are just so slim.’