Research carried out by the National Institutes of Health (NIH) looked at 33,000 American women for more than a decade.

The rate of uterine cancer was 4.05 per cent in women who said they used chemical straighteners more than four times a year, compared to 1.64 per cent in those who did not.

Scientists believe chemicals in hair straightening creams seep into the bloodstream through the scalp and travel to the womb.

Uterus cancer is uncommon, making up only around three per cent of all cancer diagnoses in American women annually.

But researchers warn rates have been rising in the US in recent years, particularly among black women.

There are around 66,000 new cases of womb cancer every year in the US, making it the most common cancer of the female reproductive system.

Millions of American women use chemical hair straighteners every year. 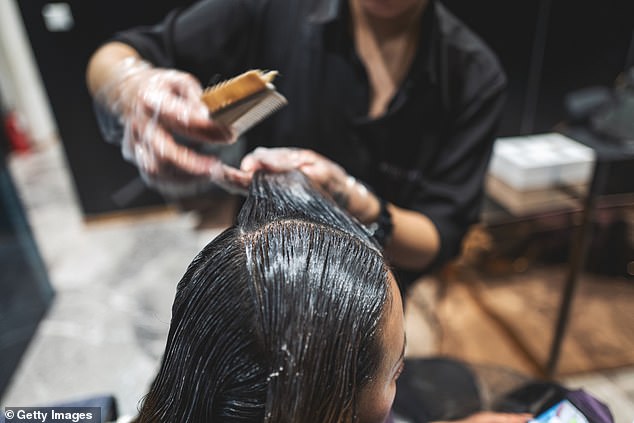 Uterine cancer is when cells start dividing uncontrollably in either the lining of the uterus or its muscle wall.

Warning signs include bleeding from the vagina between periods, pains or cramps in the pelvis and a white or clear vaginal discharge.

About 81 per cent of patients live for at least five years after their diagnosis, according to the American Society of Clinical Oncology.

But for black women this rate falls to 63 per cent, which experts say is due to them being more likely to be diagnosed with a more aggressive form.

Uterine cancer is uncommon, accounting for three per cent of all cases among women every year.

It describes two types of cancer: Endometrial, in the lining of the uterus, or uterine sarcoma, in the muscle wall of the uterus.

Women are not screened for the cancer normally, but the endometrial type tends to be diagnosed at an early stage helping prevent its spread.

How is it diagnosed?

Uterine cancer is diagnosed through a combination of blood tests and scans of the uterus area.

How is it treated?

Treatment options include chemotherapy and radiotherapy to destroy the cancer cells.

Surgery may also be offered in some cases of endometrial cancer.

What is the survival rate?

The American Society of Clinical Oncology — cancer research experts — says that 81 per cent of women diagnosed with the cancer live for more than five years.

But for black women the five-year survival rate is six per cent.

They say this is because it tends to be more aggressive in these individuals, although it is unclear why this is the case.

In the first of its kind study, women between the ages of 35 and 74 years were monitored for almost 11 years.

There were 378 cases of uterine cancer in that time.

About 1.09 per cent of women in the group who never used hair straighteners developed uterine cancer.

But among those who used them more than four times a year the rate was 1.65 per cent.

A further 12 cases were also spotted among the 1,464 (0.82 per cent) who used them less than four times a year. When the group was controlled for age, however, their risk was still higher than in those who never used the products.

Scientists then estimated the proportion in each group that would get the cancer by the time they were 70 years old to get the results.

About 60 per cent of women who used hair straightening creams were black, the scientists said, suggesting this group may be more at risk.

Dr Alexandra White, an epidemiologist at the NIH who led the study, said: ‘The doubling rate is concerning. However, it is important to put this information into context — uterine cancer is a relatively rare type of cancer.

‘More research is needed to confirm these findings in different populations, to determine if hair products contribute to health disparities in uterine cancer and to identify the specific chemicals that may be increasing the risk of cancers in women.

She added: ‘To our knowledge this is the first epidemiological study that examined the relationship between straightener use and uterine cancer.’

All hair is made of a protein called keratin, which contains molecules called sulfides.

Sometimes these form pairs between each other, or disulfide bonds, which create curls in hair.

Chemical hair straightening works by dissolving these bonds and altering the structure of the hair.

This leads to it becoming ‘relaxed’ and straightened.

The creams — which use chemicals including formaldehyde and parabens — are applied to entire hair strands where they break down bonds.

After about 20 minutes they are washed off before heat — such as that from machine straighteners — is applied to ensure when the hair sets it is straight.

Hair altered in this way normally remains straight for several months, or until enough new hair has grown through.

Black women use it more often because their hair tends to be much curlier. One survey suggested 62 per cent of women in this group use the products.

In the paper the scientists suggested that chemicals in the straighteners may be entering the blood stream via the scalp.

They would then in turn travel to the uterus, raising the risk of the cancer.

No brands or specific chemicals were studied in the research.

But scientists warned that parabens, bisphenol A, metals and formaldehyde — all used in chemical hair straighteners — may raise the risk of the cancer.

Burns and lesions can exacerbate the rate at which it was absorbed, they added.

The study was published in the Journal of the National Cancer Institute.

It was based on 33,497 women who took part in the Sister Study, which is researching factors that may raise the risk of certain cancers in women.

Participants were recruited from 2003 to 2009 and monitored for about ten years.