Couple who both had cancer welcome their second daughter after Facebook group secretly raised £2,000 for IVF treatment

A couple who were surprised with £2,000 to pay for their IVF treatment had their second daughter on Saturday.

Marisha Chaplin, 26, gave birth to Isla after a group of Facebook mums secretly raised the money to fund the former cancer patient’s IVF.

She and her fiance, Jon Hibbs, 29, have been together more than 10 years and already have one daughter but couldn’t afford a second round of the treatment.

But members of a Facebook group for women who gave birth in May 2016, which Ms Chaplin joined after the birth of her first child, Evie, raised the money for them.

Ms Chaplin said having their second child was ‘better than we ever imagined’ and thanked the group of generous mothers who have never even met her. 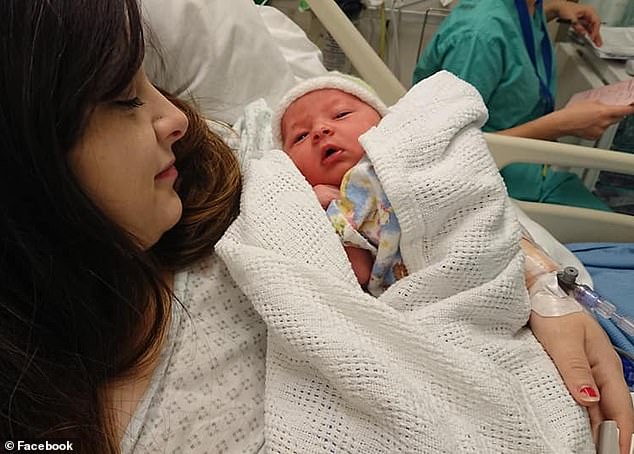 Marisha Chaplin, 26, gave birth to her second daughter, Isla (pictured) on Saturday after mothers in a Facebook group secretly raised the money for her second round of IVF

Ms Chaplin and Mr Hibbs, from Cotgrave in Nottinghamshire, met in a cancer treatment centre in 2007.

She was having treatment at the time while he had returned for a routine check-up.

‘I saw him and said to our Clic Sargent worker “I fancy him” basically, and she said she could give him my MSN address,’ Ms Chaplin told the BBC.

After the pair got together, Ms Chaplin knew she would have to have children while young if she wanted them at all, because of the toll of her cancer therapy.

‘At 16 my gynaecologist said “You need to try for children sooner rather than later if you want them”.’ 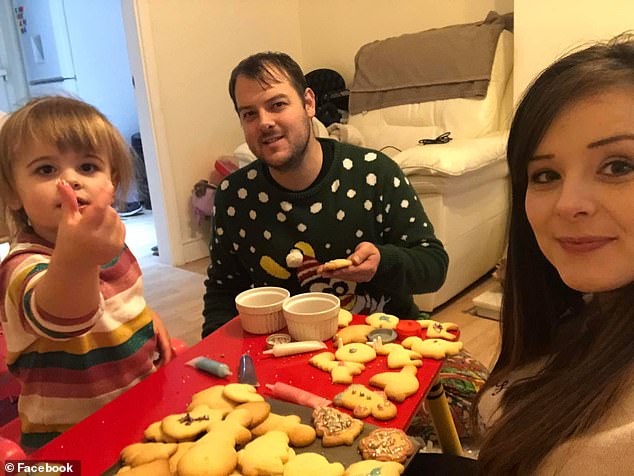 Ms Chaplin and her partner, Jon Hibbs (centre), had their first daughter Evie (left) from IVF in 2016 and used a frozen embryo from the first cycle for her sister, Isla, meaning they are biological sisters

Both chemotherapy and radiotherapy – common forms of cancer treatment – can leave people infertile because they damage healthy cells as well as tumours.

The couple started trying for a baby when Ms Chaplin was just 16 years old but were not successful, and switched to IVF seven years later using donated eggs.

Evie was born in May 2016 and, after the group of mothers on Facebook raised the funds to pay for Ms Chaplin’s second round, the couple used embryos from the same cycle, meaning the two girls are biological sisters.

The ‘May babies’ group revealed they had secretly raised the £2,000 in a Facebook Live video in July last year.

Ms Chaplin rushed to thank her online friends after Isla was delivered by c-section.

‘It’s amazing, it really is,’ she told the BBC. ‘It’s better than we ever imagined and we didn’t think we would ever get to this point.

‘We didn’t ever think we had the chance to have another little one and the fact she’s here is so surreal.’

HOW DOES IVF WORK?

In-vitro fertilisation, known as IVF, is a medical procedure in which a woman has an already-fertilised egg inserted into her womb to become pregnant.

It is used when couples are unable to conceive naturally, and a sperm and egg are removed from their bodies and combined in a laboratory before the embryo is inserted into the woman.

Once the embryo is in the womb, the pregnancy should continue as normal.

The procedure can be done using eggs and sperm from a couple or those from donors.

Guidelines from the National Institute for Health and Care Excellence (NICE) recommends that IVF should be offered on the NHS to women under 43 who have been trying to conceive through regular unprotected sex for two years.

People can also pay for IVF privately, which costs an average of £3,348 for a single cycle, according to figures published in January 2018, and there is no guarantee of success.

The NHS says success rates for women under 35 are about 29 per cent, with the chance of a successful cycle reducing as they age.

Around eight million babies are thought to have been born due to IVF since the first ever case, British woman Louise Brown, was born in 1978.