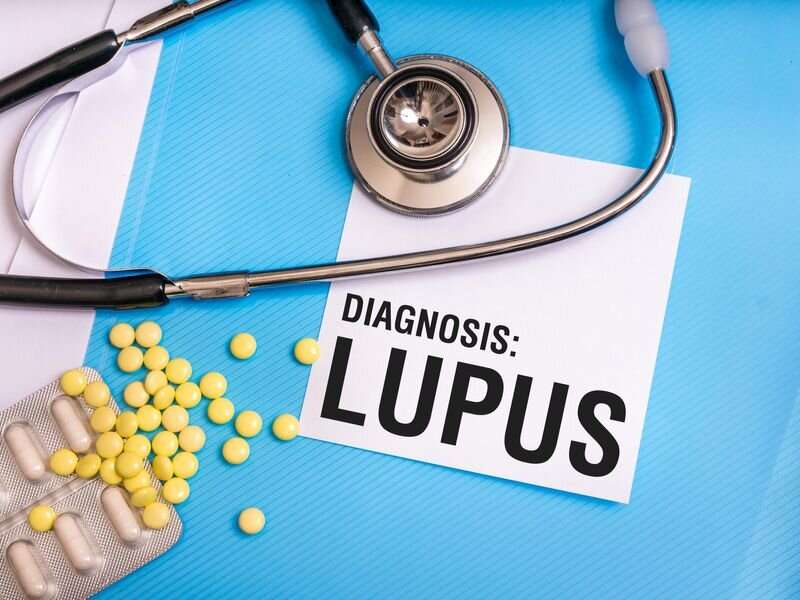 An experimental drug that has been shown to treat rashes in people with lupus may also help with lupus-related joint pain.

Affecting as many as 1.5 million people in the United States, lupus is an autoimmune disease in which the body’s immune system misfires against its own joints, skin, brain, lungs, kidneys and blood vessels.

People with lupus who took litifilimab showed marked reductions in joint tenderness and swelling compared with people who took a placebo (or dummy medication), a clinical trial showed.

Given as a shot, the new drug is a monoclonal antibody. These are man-made molecules that target specific proteins on cells. In this case, the drug targets a protein called blood dendritic cell antigen 2 (BDCA2). This protein is found on plasmacytoid dendritic cells (PDCs), which produce inflammatory molecules including type 1 interferons.

“There’s a lot of evidence that interferon is important in lupus,” said study author Dr. Richard Furie. He is chief of rheumatology at Northwell Health in New Hyde Park, N.Y., and a professor at the Feinstein Institutes for Medical Research in Manhasset, N.Y.

“The antibody binds to BDCA2, the protein is internalized, and the synthesis of type 1 interferon is shut off,” he explained. “Litifilimab doesn’t kill the cell: It just puts it to sleep.”

The new drug also seems to help cool other inflammatory proteins involved in lupus, but its chief effect is on type 1 interferon, Furie said.

For the study, 102 people with lupus who had at least four tender and four swollen joints received a 450 mg dose of litifilimab or a placebo for 24 weeks. The drug is given as a shot every four weeks.

Patients who took litifilimab had fewer swollen and tender joints than their counterparts who got the placebo, the investigators found.

In addition to improving joint symptoms, the new drug also improved skin rashes and had a “very robust” effect on a scale measuring overall lupus symptoms and activity, Furie said.

“This drug is very good for skin disease, and this robust response says it is good for global lupus too, not just arthritis,” he said. Drug maker Biogen sponsored the new trial.

Now, the new drug moves on to larger Phase 3 trials, to test safety and effectiveness. Then, Furie said, hopefully it continues its march toward U.S. Food and Drug Administration approval.

“The future is bright,” he said. “There’s a lot of drug development in lupus, and we are finally seeing success.”

The findings were published Sept. 8 issue in the New England Journal of Medicine. In July, the same journal published promising results for litifilimab in treating skin lupus.

Dr. Daniel Wallace, a rheumatologist and professor of medicine at Cedars-Sinai Medical Center in Los Angeles, wrote an editorial that accompanied the latest findings.

“The drug is promising for both systemic and cutaneous [skin] lupus,” Wallace said.

People who took the drug did have a higher risk of developing shingles, however.

“Patients would be advised to be immunized with shingles vaccine before [starting this drug],” Wallace said. This is also recommended for another lupus drug that was approved in August 2021 to target interferon.

More study is needed before litifilimab is approved, he said.

“The major questions to be investigated are, one, how the drug works in people of color who were underrepresented in the study, and secondly, how it works in patients with serious, organ-threatening disease,” Wallace said.

He noted that lupus disproportionately strikes people from racial and ethnic minority groups and they are also more likely to develop severe lupus.

Rheumatologist Dr. Jill Buyon is cautiously optimistic about the new drug and the current lupus drug pipeline. She is director of the Lupus Center at NYU Langone in New York City.

“I am swayed not just by the clinical data but by the mechanism, which is upstream of interferon signaling and more directly targeting the source,” she said of litifilimab.

It’s too early to know which people with lupus would respond best to the new drug, said Buyon, who has no ties to the new research.

“Arthritis is an unmet need in lupus, and we have not had a whole lot of success treating it,” she said. “The new drug is exciting because it’s very targeted, seems to be quite effective for arthritis, and comes on the heels of the cutaneous [skin] study.”

More drugs for lupus are definitely needed as current ones only work in some people, some of the time, Buyon said.

The future of lupus treatment is expected to involve precision medicine or matching treatments to people based on very specific characteristics of their disease.