A European health body has warned it cannot back vaping as a safe aid to quitting smoking because of a lack of evidence.

The European Respiratory Society said continued exposure to toxins in e-cigarettes is a ‘bad alternative to quitting smoking’ – even if it may be at a reduced level.

In an editorial, the ERS’s Tobacco Control Committee argued current health policies which support vaping are based on ‘incorrect claims or assumptions’.

It also warned nicotine-containing e-cigarettes are being used by non-smokers at an ‘alarming’ rate.

The ERS warning comes amid a spate of lung injuries and deaths linked to vaping across the US in recent weeks. At least 2,900 people in 50 states have developed vaping-related illnesses.

Despite the growing fears, Public Health England has continued to stand by its 2015 claim that e-cigarettes are 95 per cent less harmful than smoking. 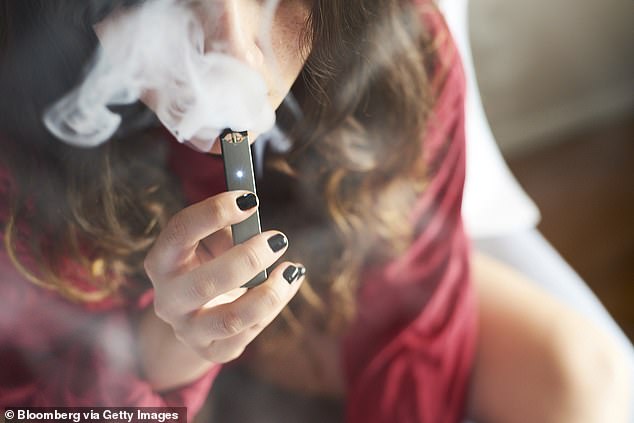 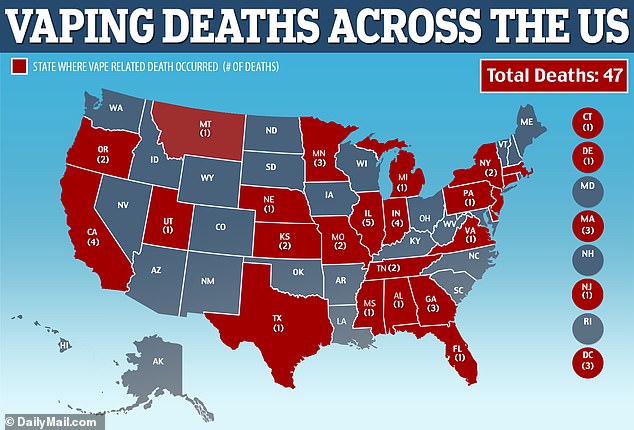 The CDC announced on Thursday that 2,290 people have fallen ill in every state but Alaska and 47 people have died in 25 states (red) due to mysterious lung illnesses linked to vaping

In an editorial, published in the European Respiratory Journal, the ERS listed seven reasons they are against alternative nicotine products replacing cigarettes:

The authors wrote: ‘It must be acknowledged that many health professionals, tobacco control professionals and decision-makers who recommend the harm reduction strategy have very good intentions.

‘They focus on the smokers and see harm reduction as a pragmatic way of reducing the devastating health effects of the tobacco epidemic.

‘However, good intentions must always be supported by strong evidence before large-scale implementation.

‘Evidence on the safety and the effectiveness of alternative nicotine delivery products as a smoking cessation tool is still lacking, while use of nicotine-containing products is spreading to non-smokers, which is most alarming.’

A vaper has been diagnosed with an incurable form of lung scarring typically found in metal factory workers.

Doctors say the rare disease was likely caused by fumes from the heating coils used in the 49-year-old’s device.

It is the first time hard-metal pneumoconiosis has been linked to vaping. But medics from the University of California, who treated the unidentified patient, warn it should be seen as a new health risk for users.

The woman went to hospital after months of struggling for breath. The patient was eventually diagnosed with hard-metal pneumoconiosis after a CT scan.

The condition creates a distinctive pattern of damage to the lungs that results in breathing difficulties.

It’s typically diagnosed in people who work with ‘hard metals’ like cobalt or tungsten, in jobs like tool sharpening, diamond polishing or making dental prosthetics.

Permanent scarring in a patients’ lungs causes symptoms such as shortness of breath and chronic coughing. The scarring cannot be cured, although some patients may have mild improvement if the exposure to hard-metal dust stops and they are treated with steroids.

When researchers tested the patient’s e-cigarette they found cobalt in the vapour it released, along with other toxic metals – nickel, aluminium, manganese, lead and chromium.

Case report author Kirk Jones, clinical professor of pathology at the university siad: ‘This patient did not have any known exposure to hard metal, so we identified the use of an e-cigarette as a possible cause.’

But Professor John Britton, director of the UK Centre for Tobacco & Alcohol Studies and consultant in respiratory medicine at the University of Nottingham, said every argument made in the editorial was wrong.

He said: ‘They (the authors) are so opposed to nicotine dependency in any form that they are risking the lives of smokers who would benefit by switching completely to e-cigarettes.

‘There is nothing in this new paper that should change advice to smokers. If you smoke, switch. If you don’t smoke, don’t vape.

‘And just as you wouldn’t buy unlicensed alcoholic drinks, don’t vape cannabis or other bootleg products.’

Co-author of the editorial Jorgen Vestbo, professor of respiratory medicine at the University of Manchester, said: ‘E-cigarettes are harmful, they cause nicotine addiction and can never substitute for evidence-based smoking cessation tools.

‘The medical profession as well as the public should be concerned about a new wave of lung diseases caused by a product which is heavily promoted by the tobacco industry.’

The Centers for Disease Control and Prevention (CDC has called vitamin E acetate a ‘chemical of concern’ in their investigations of growing cases of vaping-related illnesses in the US.

The US health officials reported 2,290 confirmed and probable cases and a total death toll of 47 so far this year related to a mysterious respiratory illness, dubbed EVALI, tied to vaping.

The intervention comes alongside a case study, also published in the European Respiratory Journal, which claims that a rare form of scarring in the lungs of a 49-year-old woman was likely caused by vaping.

Hard-metal pneumoconiosis, which can result in permanent scarring, breathing difficulties and chronic coughing, was reported by academics from the University of California in the US.

The researchers found cobalt and other toxic metals in the vapour produced by the device, which they believe comes from the heating coils found inside.

HOW COULD VAPING BE HARMFUL?

E-cigarettes have the potential to benefit some people by helping them quit smoking, researchers say. But scientists still have a lot to learn about whether e-cigarettes are truly effective for quitting smoking and what the long-term risks are.

Nicotine is already known to be highly addictive and harm adolescent brain development, which continues into the early to mid-20s.

E-cigarettes produce an aerosol by heating a liquid that usually contains nicotine. Aerosol is inhaled into the lungs and can contain potentially harmful substances, including heavy metals like lead, volatile organic compounds, and cancer-causing agents.

US health officials, the Centers for Disease Control and Prevention (CDC), are investigating an outbreak of e-cigarette or vaping, product use associated lung injury (EVALI).

The mystery illness has swept across the states. Officials have identified Vitamin E acetate as a chemical of concern. THC is present in most of the fluid samples collected from the lungs of ill people, and most patients report a history of using THC-containing e-cigarette, or vaping, products.

‘Popcorn lung’ is the nickname for bronchiolitis obliterans, a condition which damages the smallest airways in the lungs and has been linked to people with vaping-related breathing problems. However, there’s no good evidence that e-cigarettes could cause the lung condition, according to Cancer Research UK.

The flavourings in electronic cigarettes may damage blood vessels in the same way as heart disease, according to research published in June 2018.

The chemicals used to give the vapour flavours, such as cinnamon, strawberry and banana, can cause inflammation in cells in the arteries, veins and heart.

They cause the body to react in a way that mimics the early signs of heart disease, heart attacks or strokes, the study by Boston University found.

Other recent studies have also suggested smoking e-cigarettes could cause DNA mutations which lead to cancer, and enable pneumonia-causing bacteria to stick to the lungs easier.

Researchers at New York University subjected human bladder and lung cells to e-cigarette vapor, which is marketed as being healthier than tobacco.

They found the cells mutated and became cancerous much faster than expected and mice exposed to the vapour also suffered significant DNA damage.

The vapour from e-cigarettes helps bacteria which cause the condition to stick to the cells that line the airways, they said.

The effect occurs with traditional cigarette smoke and those who are exposed to air pollution high in particulates from vehicle exhausts.