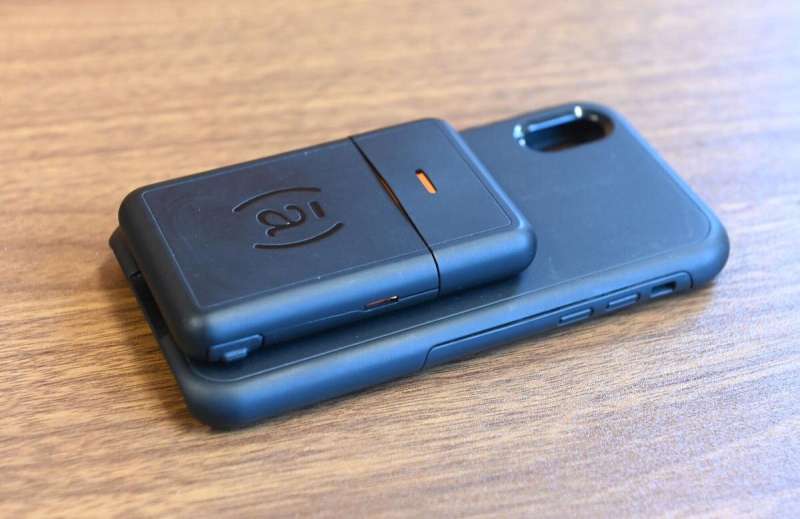 As a young adult, Javier Evelyn didn’t always carry his epinephrine autoinjector, which dispenses the medicine he needs if he has a food allergy reaction. It wasn’t cool to carry a clunky piece of equipment, he recalled.

“I did not carry my device with me at all for most of college, so I was just really fortunate, to be real with you, when it came to not having any big scares as I was more independent down the road,” said Evelyn, 38, a Chicago area native who is allergic to some tree nuts, fin fish and casein, a protein found in cheese.

Evelyn, who has a tech background, moved to Detroit in 2013 and decided to create a more convenient device. His innovation: a cellphone case with an attached epinephrine auto-injector.

“I really wanted to solve a problem that was personal to me,” he said. “Something I cared about deeply. Being that I have this lifelong problem and I never really carried an EpiPen growing up because I thought it was not cool to carry. … Fast-forward in Detroit, I’m having conversation with folks that I know, and a lot of folks felt the same way.”

Evelyn, whose business, Alerje, is based at TechTown Detroit, was recently granted a patent on the phone case, called Omniject, by the United States Patent and Trademark Office. He also was honored by TechTown as a Toast of Town Salute Awardee, and this year, his company received a small business innovation research grant award from the National Science Foundation.

Paul Riser, managing director of technology-based entrepreneurship at TechTown, said he’s watched Evelyn’s business grow during the past few years and believes his device could be a game-changer.

“I see this becoming a standard of addressing allergies in communities at all scales and all socioeconomic bubbles,” Riser said.

An estimated 32 million Americans have food allergies, including 5.6 million children, according to Food Allergy Research & Education, a Virginia-based nonprofit. Annually, 200,000 people in the U.S. require emergency medical care for an allergic reaction to food, according to FARE.

Evelyn said the high number of food allergy sufferers and the experience of managing his allergies led him to create the autoinjector as well as two apps for food allergy management.

“It was the convergence of me having this problem, seeing a bigger problem that affects a lot more people and coming up with a solution, although novel at the time, that essentially could fit in the background,” he said. “Your device is there when you need it … but it’s not when you don’t.”

The Omniject smartphone case has an attached rectangular autoinjector on the back that is about half an inch thick. If the owner experiences an allergic reaction, they can inject themselves with epinephrine. The device includes software that will alert the patient’s support circle if a dose is discharged.

Although it is recommended by doctors that those with food allergies carry two epinephrine auto-injectors with them at all times, people don’t always follow that advice, as was the case with Evelyn in his younger days.

According to a 2018 study led by health behavior researcher Christopher Warren of the University of Southern California, of 900 respondents with food allergies, 89% had filled a prescription for an epinephrine auto-injector but 45% reported not having one with them during a severe allergic reaction.

“People are less likely to carry their epinephrine with them to parties, sports, activities or beaches,” said Dr. Malika Gupta, a pediatric allergist and assistant professor for the University of Michigan Health System. “Concern for temperature sensitivity of the medication and tight clothing are some of the other issues I have seen that are a hindrance to carrying epinephrine.”

But it’s crucial for patients to have their medication available at a moment’s notice.

“The only effective treatment for a severe allergic reaction, or anaphylaxis, is epinephrine,” Gupta said. “It is quite literally a life-saving medication. It is also vital to use the medication early in a reaction, hence the importance of having it on hand at all times.”

Gupta, who has served on Alerje’s medical advisory board since earlier this year, hopes the device will make it easier for people to carry their medication.

“Bundling this essential medication to something that people carry nearly all the time is a brilliant solution and might influence the willingness of our adolescent patients to carry their epinephrine,” she said.

Evelyn’s work began with the idea for the device and led to the creation of a lifestyle app, called Alerje, which is available for iOS and Android.

The Omniject will tie in with the Alerje app, which allows users to track foods that could be dangerous to them. Evelyn and his team are also working on an app to help patients undergoing food desensitization, known as oral immunotherapy (OIT) treatment, to track and communicate their progress with their allergist. He has submitted a provisional patent for that.

When developing his company, Evelyn drew from his experience leading app projects for MeridianRx/Meridian Health Plan in Detroit. He is also a founding member of MedTech Color, a Encino, California-based nonprofit organization that works to increase and support people of color in the medical device industry. The group also discusses strategies to increase clinical trial enrollment of under-represented ethnic groups.

He’s part of a team of six people working on the device and the app, including developers, marketers and legal and regulatory consultants. Evelyn said he’s working with a large autoinjector maker he could not name because of an agreement.

Evelyn said to date, the company has raised close to $2 million collectively for its projects and needs an undisclosed amount to bring it to market. They plan to seek additional Series A financing next year to continue to pursue regulatory approval as well as to develop the OIT digital platform.

“We believe that with the right partner and building up additional team members, we’ll be able to move forward with the commercialization of our device,” he said.

Riser sees a bright future for Evelyn and his enterprise.

“I think Javier has a keen understanding of the importance of obviously entering the market and working with the larger companies who can help him accelerate that pathway, but I also know that Javier will never forget and/or dismiss the importance of the cost of health care and ensuring that devices and services and solutions like his are also affordable for people at all levels or strata of the economic sphere,” he said.