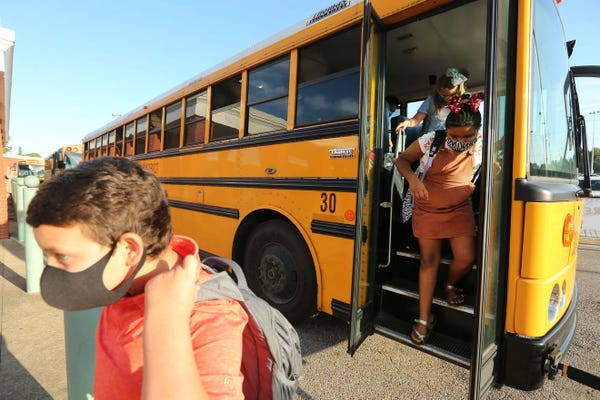 Over the last four weeks, I've been working on the COVID-19 School Response Dashboard, a partnership between Qualtrics, the National Associations of School Superintendents and Principals, and me, along with a whole host of others. We have been collecting data from US schools on COVID-19, the disease caused by the coronavirus.

Our latest data from the last two weeks of September covers about 550,000 enrolled students, of whom 175,000 are in person and 56,000 staff.  We have data over this period from 47 of 50 states, plus Washington DC.  Nearly all in-person schools in the data are doing some kinds of mitigation. Masks are the most common, but they are not universal.  Only about 60% of schools report requirements of six feet distancing.

While it's too early to say anything definitely, this also suggests that schools are not super-spreaders.

Looking at geographic variation is key

The top-line number is likely what grabs people first, but we are now trying to better understand the data. The first key to that is looking at geographic variation. How are the rates we are seeing in schools changing with the rates in the community?

It's worth pausing to ask what we would expect. As an example, let's start with the assumption that the prevalence of the virus in the community is 1%. One possibility is schools are just like any other random location in the community, but that there is little or no spread in school.

If this is the case, we'd expect the prevalence in people at school to be 1%. That is, we would still expect to see some COVID-19 in schools, coming in from outside.

Another possibility is that people in schools are positively selected as lower prevalence. This could be a result of general selection or, in the context of our data, it could reflect bias in who we recruit to our sample.  In either case, we'd expect schools to be lower prevalence than the surrounding area, although still we'd expect higher school rates in areas with higher community rates.

If schools are doing a good job keeping the virus at bay — for example, by encouraging positive behavior in students and staff and by protecting people at school — you might expect the link between schools and community rates to be less strong.  The community matters less if you have a good bubble.

Finally, if schools are a source of significant spread then we'd expect higher school rates than community rates.  This is probably the major source of concern and it's notable that it's what we are seeing some in college-age populations.  Universities have seen large spikes, outpacing the communities in which they are and contributing to overall community spread.

So which is it?

The images below show — by census division, since we don't yet have quite enough data to do each state — the student prevalence in schools (that's cases over a two week period) alongside the case rates in these census divisions over that period.

The staff cases are somewhat higher than student cases and are alternatively higher and lower than the community rates, although the numbers are small.  We'll know more about this as the data evolves.

The staff rates are very similar for in-person and remote learning, an issue which needs more exploration.

In the second set of maps we separate out by private and public schools.  Private school rates are generally lower — this may reflect demographics, resources or mitigation strategies — but we also see they link less closely to community rates.

What does this tell us?  On the one hand, community spread clearly matters for schools.  This is a point made early on by Ashish Jha, the dean of the Brown University School of Public Health, and others, as they linked the risk of opening schools to community spread. The evidence suggests that we should expect more cases to show up in schools in areas where cases are higher in the community.

On the other hand, the school rates here are low even in places with high community rates.

We will need more evidence, more time, and more data to understand this better.

Emily Oster is a Professor of Economics at Brown University and the author of Expecting Better and Cribsheet.