Ebola has now killed more than 500 people in the Democratic Republic of the Congo, including almost 100 children, according to the latest figures.

The outbreak, the second worst in history, has ravaged the country since officials confirmed the return of the virus in August.

Aid workers on the ground warned in January that the outbreak is expected to rage on until at least the middle of the year.

Thousands of lives have been saved by vaccinations, according to the country’s government, which is administering them in high risk areas.

But efforts to slow the spread are being hampered in the unstable region, where conflict and mistrust of government and health workers is rife. 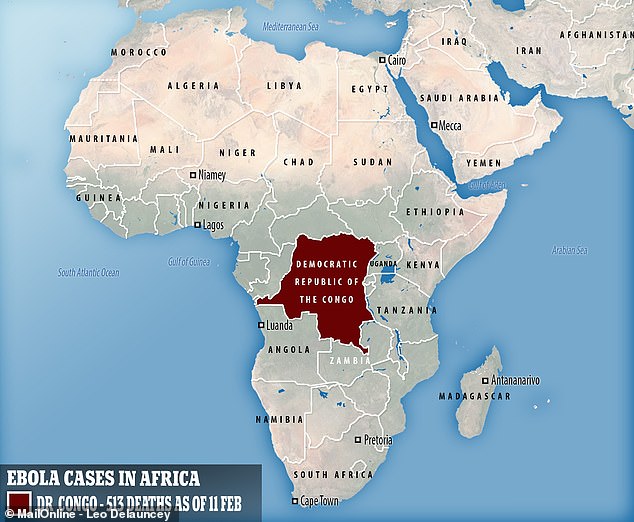 More than 500 people have now died in the Ebola outbreak in Democratic Republic of the Congo – 97 of them have been children, according to Save the Children 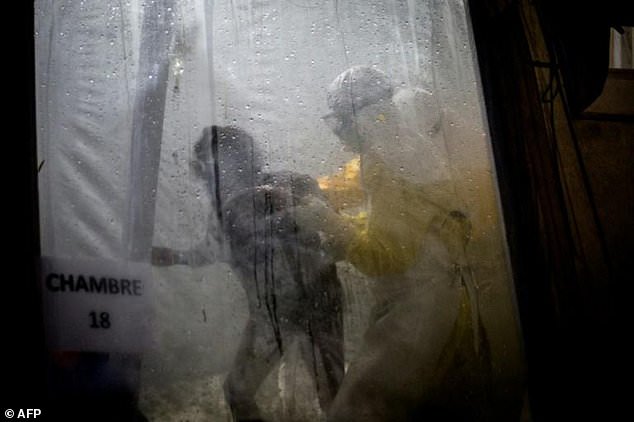 Health workers assist a possible Ebola patient into her bed at an Ebola treatment center supported by the Doctors Without Borders group in Butembo, in the Democratic Republic of the Congo

A health ministry bulletin reported on Friday: ‘In total, there have been 502 deaths and 271 people cured.’

Of these, 97 have been children, with the majority under the age of five, according to figures from the non-profit organisation Save the Children.

The organisations fears the death toll among children will rise, considering the number of new cases spiked in January, from around 20 per week to more than 40.

Heather Kerr, Save the Children’s country director in the DRC, said: ‘We are at a crossroads. If we don’t take urgent steps to contain this, the outbreak might last another six months, if not the whole year.

‘The DRC is a country suffering from violence and conflict and an extreme hunger crisis – some 4.6 million children are acutely malnourished.

‘The main concerns for many people are safety and making sure they have enough to eat. But Ebola has to be a priority too.’

But Health Minister Oly Ilunga Kalenga said that, for the first time, a vaccination programme had protected 76,425 people and prevented ‘thousands’ of deaths.

‘I believe we have prevented the spread of the epidemic in the big cities,’ he said.

‘The teams also managed to contain its the spread of the epidemic to neighbouring countries.’

Merck – the pharma giant behind the vaccine – delivered 2,160 doses to the African nation.

Official data on the vaccine’s efficacy is still not available, but World Health Organisaition experts believe it’s been highly effective – 90 per cent or higher.

The vaccine protects against the Zaire strain of the virus, which is the strain behind this tenth outbreak in history.

‘The biggest problem is the high mobility of the population,’ the minister said.

Neighbourhoods in the region are densely populated and regular migration could spread the virus – 300,000 refugees have fled to Uganda since the outbreak began.

The outbreak is also taking place near the country’s Western border near major trade routes, which also increases the risk, experts have warned in the past. 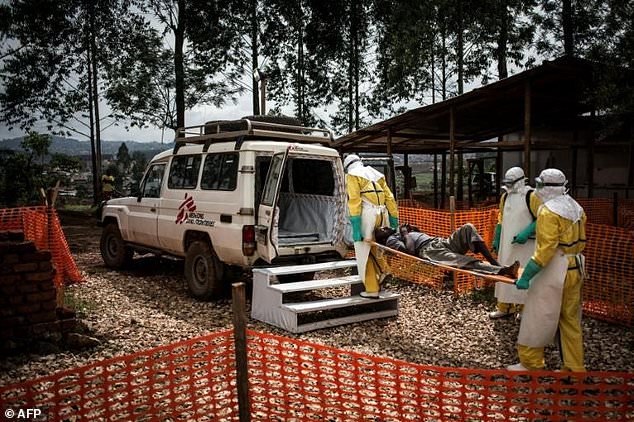 Health workers move a patient to a hospital after he was cleared of having Ebola at a Doctors Without Borders supported treatment center in Butembo, DRC in November 2018 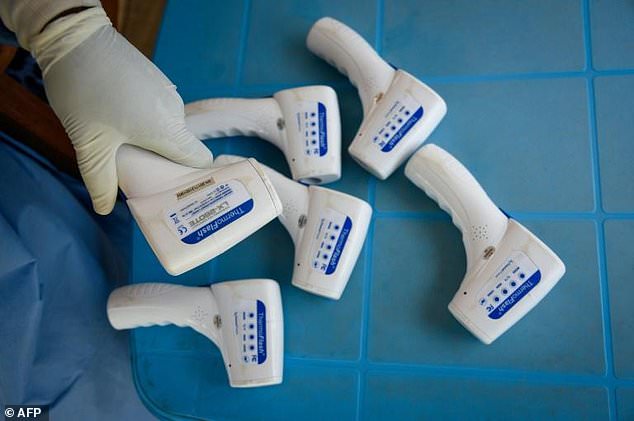 A group of world health experts wrote in British medical journal The Lancet this week and said the outbreak is ‘not under control’.

They said ‘bold measures’ are needed to stop it and called on the World Health Organization to take ‘drastic action’.

The outbreak – second only to the 2013/2014 West African epidemic which killed 11,000 – started in the North Kivu region, which borders Uganda and Rwanda.

The Spanish wing of the aid agency Doctors Without Borders (MSF) reported on Twitter Saturday that there had been a surge in cases since January 15.

Rwanda, Uganda and South Sudan, further north, were all now on alert, it added.

The security situation in the east of the country, where armed rebels have terrorised the population for years, has made treating the disease difficult.

WHAT IS EBOLA AND HOW DEADLY IS IT?

Ebola, a haemorrhagic fever, killed at least 11,000 across the world after it decimated West Africa and spread rapidly over the space of two years.

That epidemic was officially declared over back in January 2016, when Liberia was announced to be Ebola-free by the WHO.

The country, rocked by back-to-back civil wars that ended in 2003, was hit the hardest by the fever, with 40 per cent of the deaths having occurred there.

Sierra Leone reported the highest number of Ebola cases, with nearly of all those infected having been residents of the nation.

WHERE DID IT BEGIN?

An analysis, published in the New England Journal of Medicine, found the outbreak began in Guinea – which neighbours Liberia and Sierra Leone.

A team of international researchers were able to trace the epidemic back to a two-year-old boy in Meliandou – about 400 miles (650km) from the capital, Conakry.

Emile Ouamouno, known more commonly as Patient Zero, may have contracted the deadly virus by playing with bats in a hollow tree, a study suggested.

HOW MANY PEOPLE WERE STRUCK DOWN?

Figures show nearly 29,000 people were infected from Ebola – meaning the virus killed around 40 per cent of those it struck.

Cases and deaths were also reported in Nigeria, Mali and the US – but on a much smaller scale, with 15 fatalities between the three nations.

Health officials in Guinea reported a mysterious bug in the south-eastern regions of the country before the WHO confirmed it was Ebola.

Ebola was first identified by scientists in 1976, but the most recent outbreak dwarfed all other ones recorded in history, figures show.

HOW DID HUMANS CONTRACT THE VIRUS?

Scientists believe Ebola is most often passed to humans by fruit bats, but antelope, porcupines, gorillas and chimpanzees could also be to blame.

It can be transmitted between humans through blood, secretions and other bodily fluids of people – and surfaces – that have been infected.

IS THERE A TREATMENT?

The WHO warns that there is ‘no proven treatment’ for Ebola – but dozens of drugs and jabs are being tested in case of a similarly devastating outbreak.

Hope exists though, after an experimental vaccine, called rVSV-ZEBOV, protected nearly 6,000 people. The results were published in The Lancet journal.