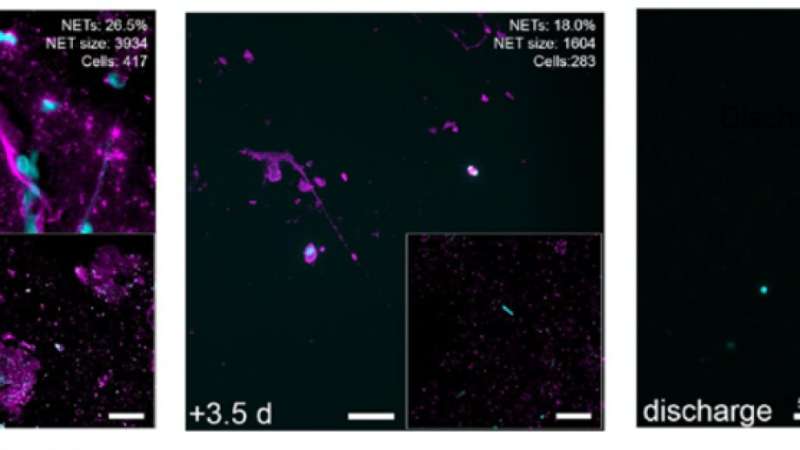 When researchers at Lund University in Sweden performed advanced analyzes of sputum from the airways of severely ill COVID-19 patients, they found high levels of neutrophil extracellular traps (NETs). It is already a known fact that NETs can contribute to sputum thickness, severe sepsis-like inflammation and thrombosis. After being treated with an already existing drug, the NETs were dissolved and patients improved. The study has now been published in Molecular & Cellular Proteomics.

Using advanced fluorescence microscopy, the researchers examined sputum in the airways of three severely ill COVID-19 patients. The results showed that the samples contained large amounts of one of the immune system’s most important agents against bacteria: neutrophils. Neutrophils can form neutrophil extracellular traps (NETs) to capture and neutralize pathogens—primarily bacteria but also viruses.

Patients with cystic fibrosis can also suffer from increased sputum viscosity. In these cases, a DNase drug is sometimes used to degrade DNA, of which NETs are primarily composed. Could the same drug have an effect on severe COVID 19 cases? A pilot study was conducted after the researchers could see in laboratory test tubes that the DNase preparation degraded the NETs. Five severely ill COVID-19 patients, who required high-flow oxygen therapy and were on the verge of needing mechanical ventilation, were treated with the preparation.

“The patients responded very well to the treatment. Dependency on oxygen therapy diminished for all of them, and they no longer needed oxygen therapy at all after four days. None of them needed to be moved to the intensive care unit, and all of them have recovered and been discharged,” says Adam Linder.

Analyzes of the patients’ sputum showed that they had high levels of NETs prior to the start of treatment, and that these levels were substantially reduced after treatment (see image).

“We have also examined other inflammation parameters using advanced mass spectrometry. Once the drug treatment started, the proinflammatory signaling diminished, which shows that the inflammation was subsiding. Plasma leakage and the viral load were also reduced,” says Tirthankar Mohanty, researcher at Lund University.

Even if the results are positive, Adam Linder emphasizes that the study is small and that additional research is needed. The researchers are consequently carrying out a phase-2, randomized clinical trial at Skåne University Hospital to examine whether aerosolised DNase (Pulmozyme) is an effective treatment for respiratory failure in conjunction with COVID-19.