DR MICHAEL MOSLEY: Why men are far more likely to die of a broken heart

When I was in my early 20s, the woman I’d been going out with for more than three years left me for another man.

I was distraught, angry, stressed, and I wrote a lot of bad poetry.

Although I was utterly miserable for a few months, I finally got over her and at no point did I think I would die of a broken heart. 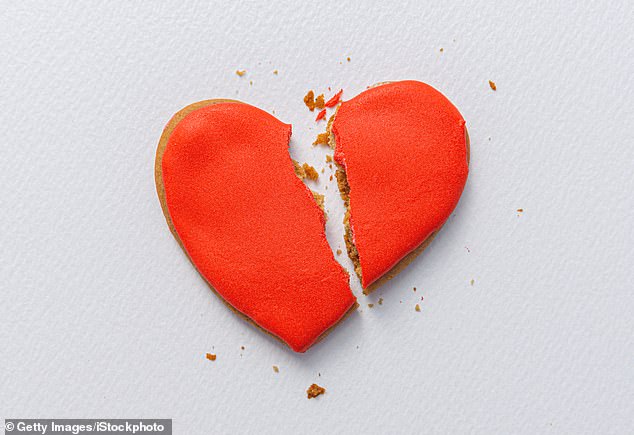 But it might be different if my wife Clare, to whom I have been happily married for more than 30 years, were to die before me. Because it turns out that you really can die of a broken heart.

It’s rare, but there’s a medical condition called broken heart syndrome, which can be triggered by intense emotional stress, such as rejection or the death of a loved one.

And if you have been together with your partner for a long time, you are particularly vulnerable.

Last month, the literary critic and philosopher George Steiner died at the age of 90. Just ten days later his wife, Zara Steiner, who was a brilliant academic and who had been married to him for 65 years, also died.

Similarly, just before Christmas, the historian Sir Michael Howard died. His partner Mark, whom he’d been with for many decades, died a few months later.

So what’s going on? And what are the odds that if someone you have been in a relationship with for many years were to die, you would swiftly follow them?

I’ve already said that broken heart syndrome is now recognised as real, and not just a poetic conceit. In fact, it has another, more technical but definitely less romantic name: takotsubo cardiomyopathy, or TTS.

It was Japanese researchers in the 1990s who first identified this stress-related cause of sudden heart failure, and who gave it a name. Takotsubo is a Japanese word meaning ‘octopus trap’.

Someone suffering from broken heart syndrome will typically develop a big bulge in their left ventricle, one of the main chambers of the heart. This makes the victim’s heart look a bit like the round-bottomed, narrow-necked bottles traditionally used by Japanese fishermen for catching octopuses. 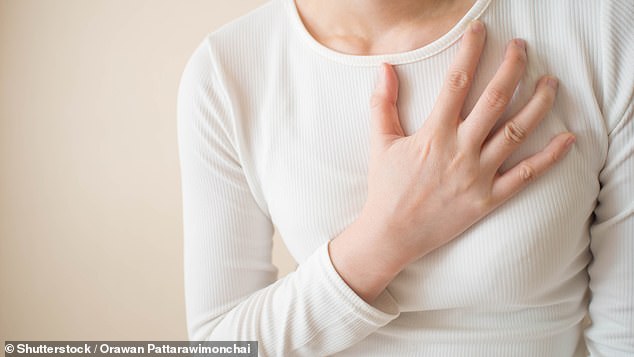 The symptoms of broken heart syndrome can include severe chest pain and shortness of breath. There’s no specific treatment for the rare condition (file photo)

No one is entirely sure why the condition occurs. But it’s thought it is triggered by a major emotional event, which in turn leads to a sudden huge surge of stress hormones. These hormones raise the blood pressure and pulse, which may distort the shape of the heart.

Symptoms can include severe chest pain and shortness of breath – but most patients make a full recovery without much long-term damage.

When the cause of the stress goes away, the heart usually returns to its normal shape.

But the sudden bulging can be deadly, because the left ventricle is responsible for pumping oxygenated blood around your body.

If it becomes distorted, it won’t work as well, and this can lead to a heart attack. Normally, heart attacks are triggered by a clot travelling through the blood system and then getting jammed in one of the coronary arteries supplying blood to your heart.

In broken heart syndrome, however, there are no signs of blockage or damage to the coronary arteries.

There’s no specific treatment for broken heart syndrome, but patients may be offered heart failure medications to lower the blood pressure.

A friend of mine, Sally, told me that a few years ago she was at home in London when she got a call from her father, who was living in Yorkshire.

He was ringing to say that her mother had unexpectedly died of a heart attack.

Sally quickly packed some things, got into her car and drove up to Yorkshire to keep her father company. But when she got to their house she found an ambulance outside.

Her father had also just died, from a heart attack.

Widowers at bigger risk than widows

Most of us will experience heartbreak at some point. But how likely is it that it’ll kill us?

In 1969, researchers recruited 4,486 recently bereaved men, aged 55 and older, and followed them for many years.

Of them, 213 died within six months of their wives’ deaths.

Researchers calculated that this was 40 per cent above the expected rate of death for married men of the same age. Fortunately, the initial shock of being bereaved seemed to wear off, because after six months the widowers’ risk of dying gradually fell back to normal.

Other studies have echoed these findings.

Interestingly, when it comes to women, there is no discernible rise in rates of heart attack or death from any cause after their partners die.

However, other studies suggest that just as many women, if not more, are affected by the physical changes of broken heart syndrome, but then recover. 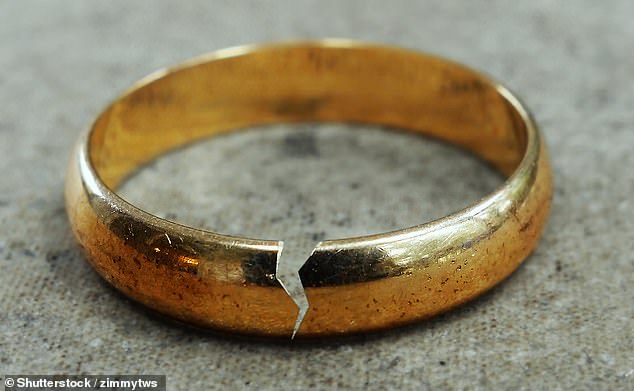 In 1969, researchers recruited 4,486 recently bereaved men, aged 55 and older, and followed them for many years. Of them, 213 died within six months of their wives’ deaths (file photo)

Well, there are lots of theories, but one of the likeliest explanations is that in a long-term relationship it is often women who maintain the links with friends and family.

I generalise wildly here, but it is certainly true in my case. When his partner dies, a man will often fall into a state of deep depression, neglecting friends, acquaintances and families, and isolating himself.

Women are not only better at maintaining their friendships but they are more willing to reach out for help when they are feeling crushed by terrible loss.

If you have experienced a recent bereavement or know someone who has, then I strongly recommend you visit the Cruse Bereavement Care website (cruse.org.uk).

Cruse has been around for more than 60 years and it is the leading national charity for bereaved people in England, Wales and Northern Ireland.

They have counsellors all around the country and provide lots of excellent help and support.

Do you have a question for Dr Mosley? Email [email protected] or write to him at The Mail on Sunday, 2 Derry Street, London W8 5TT. Dr Mosley can only answer in a general context and cannot give personal replies. One of my favourite singers, country legend Johnny Cash, died in 2003 at the age of 71 – just four months after the death of his wife June Carter Cash, who was 73 and a musical powerhouse in her own right. The couple, right, were married for 35 years.

After she died following complications from heart surgery, Cash famously told a friend: ‘The pain of her being gone is more than I can stand.’ And it seems he was tragically right – although reports suggested that he’d had a heart attack. Official records suggest he suffered ‘respiratory failure’ – he stopped breathing – due to diabetes complications.

In 2016, Hollywood royalty Debbie Reynolds died of a stroke just a day after her daughter, Star Wars actress Carrie Fisher, passed away. Fisher had suffered a heart attack on a flight coming in to land at Los Angeles. According to Debbie’s son Todd, after hearing of the death of her daughter, she said: ‘I want to be with Carrie.’