DR MICHAEL MOSLEY: How to cut food waste, help the planet, AND boost your health at the same time!

Did you know that every year each household chucks around £700 into the bin?

That’s the cost of the food that the average UK household throws away, according to the sustainability charity WRAP.

Most of it doesn’t even reach the plate. It goes straight from fridge or cupboard, to bin. That’s 6.6 million tonnes of food, worth a whopping £14 billion.

Even worse than the money and resources wasted, are the huge amounts of greenhouse gases, such as carbon dioxide and methane, that are produced by rotting food mountains. 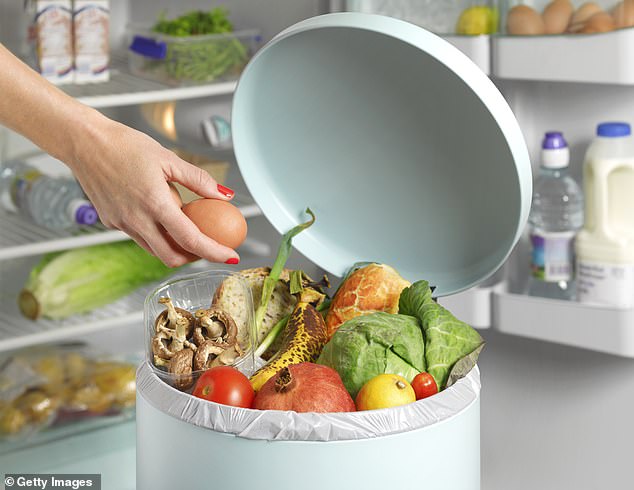 Did you know that every year each household chucks around £700 into the bin? That’s the cost of the food that the average UK household throws away, according to the sustainability charity WRAP

If food waste was a country, it would be the third-highest emitter of greenhouse gases after the U.S. and China, according to the United Nations.

So it would be wonderful if we could all do our bit to keep food waste down. It’s good for the planet and for our pockets.

I decided to find out how I could minimise my own food mountain and see what I could safely eat after it had passed its official sell-by date — or the accepted rules about when you should throw food out. And the good news is that avoiding food waste can have direct benefits for your health, too!

At least 24 million slices of bread are chucked out every day in the UK, because they are stale or mouldy, says WRAP. Mouldy bread should always be binned, but stale bread can obviously be used for bread and butter pudding or baked ratatouille with breadcrumbs.

If you use a bread bin, make sure you’ve shaken out the old crumbs, because if these are mouldy they contain spores that can contaminate new bread.

Avoiding food waste is often about storage. My wife Clare and I reduce our bread waste by keeping it in the freezer and bringing out a slice as and when needed. Another reason to freeze bread is that it changes the starch in it into ‘resistant’ starch, which your body finds harder to absorb.

My wife Clare and I reduce our bread waste by keeping it in the freezer and bringing out a slice as and when needed, writes Dr Michael Mosley (pictured)

As a result, fewer calories are absorbed by your body and more are available for your microbiome (your gut bacteria) giving the ‘good’ ones something to feed on and proliferate. And as we all now know, a healthy microbiome can affect everything from weight gain to mood.

A lot of people are convinced it’s dangerous to reheat rice. That’s because rice is often infested with a bacterium called bacillus cereus, which produces a toxin that can make you ill. Back in the 1970s there was a spate of food poisonings from all-you-can-eat Chinese buffets, where the rice had been left out for hours, then reheated.

But as long as you put your rice leftovers in the fridge within an hour or so of cooking you should be fine because the bacterium doesn’t grow rapidly in the cold.

Clare and I often cook several meals-worth of brown rice at once, and reheat it the next day in the microwave, use it for fried rice or store it in the freezer.

As with bread, cooking, cooling and reheating rice turns the starches into resistant starch. The same is true of pasta. So instead of binning it, you could cool and reheat it the next day.

Exposure to air has a really ageing effect on cheese, so ideally you need to double-wrap it and put it in a plastic container at the bottom of the fridge, where it’s coldest.

And if it goes mouldy?

But you have to be much more careful with soft cheeses, such as brie, which mould can penetrate. These need to be binned as they could carry mycotoxins and biogenic amines, pathogens you really don’t want to eat.

All too often vegetables end up at the bottom of the fridge, where you only discover them when they begin to rot.

One thing you can do is put your veggies on the middle shelf, where you will see them when you open the fridge, so they’re less likely to be wasted. Even if they are a bit tired, they can be added to omelettes or used to form the basis of a soup — they will still provide nutrients and fibre. Do not eat vegetables that are covered in slime as they can make you really ill.

You can, of course, buy frozen vegetables, which will not only last longer but often have a higher nutrient content.

Potatoes are another starchy food that can benefit from being cooked, cooled and reheated. As with rice, Clare and I often boil double portions and then reheat what’s left the following day.

If your potatoes are sprouting, it just means they are ready to grow and it is safe to cut the little shoots off and cook.

Bananas are the UK’s most popular, and most discarded, fruit. More than 300 million are chucked out every year, says WRAP.

Store bananas at room temperature and keep them away from other produce that releases ethylene gas, such as avocados, tomatoes and apples, as this will ripen them faster.

To avoid banana waste, eat them early while they’re still green. They actually contain higher amounts of resistant starch then.

As I grow older I spend more time looking after my teeth. Once I’d give them a cursory brush. Now it’s flossing then two minutes with the electric toothbrush (if you floss first it shifts more plaque). I brush twice daily and use interdental brushes after. I hope it’ll reduce my risk of gum disease — and dementia — by cutting chronic inflammation. But am I doing enough?

Research from the University at Buffalo in the U.S. looked at which ‘oral hygiene tools’ prevent gum disease: it was a thumbs up to flossing and inter-dental brushes and mouth-washes that contain chlorhexidine gluconate or cetylpyridinium chloride (though researchers were unimpressed by rinses based on tea tree oil or green tea). I don’t use mouth’ wash, but perhaps I should.

There was good news and bad news about type 2 diabetes this week. Rates of type 2 have doubled in the past 15 years, driven largely by our ever-growing waistlines. The charity Diabetes UK says that by 2030 more than 5.5 million Britons will be living with the condition.

The good news comes in two parts. Firstly, an international panel of diabetes experts has published an article in The Lancet urging colleagues to focus on treating type 2 diabetes through weight loss rather than trying to control blood sugar levels by prescribing drugs.

At last recognition of something I and others have been banging on about for years: that you can reverse type 2 diabetes by losing weight (which is far better for your long-term health than just taking the tablets).

Weight loss helps because people with raised blood sugar are often carrying too much fat around their waists.

This visceral fat, as it’s known, clogs up the liver and pancreas, which can’t then produce insulin to bring blood sugar levels down. A weight-loss diet is a proven way to get rid of visceral fat, fast.

I have a very personal interest in this: nine years ago I was diagnosed with type 2 but reversed it by inventing the 5:2 diet and losing 20lb (9kg) in a couple of months. At the time of my diagnosis, I wasn’t particularly overweight, so I was intrigued this week when my friend, Professor Roy Taylor, of Newcastle University, showed me the early results of a study with people who have type 2 despite a ‘healthy’ BMI (body mass index).

He and his team put these patients on an 800-calorie-a-day diet until they lost 10 to 15 per cent of their weight — three quarters got their blood sugar levels back to normal, without medication. Scans showed big reductions in their visceral fat around the liver and pancreas. If they keep the weight off, it will transform their lives, as it has mine.