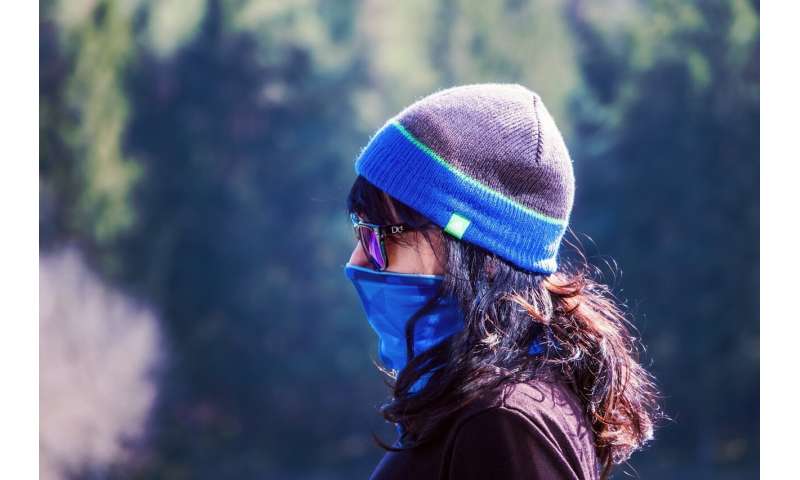 Will warmer weather spell relief for the pandemic? New preliminary research from UConn says don’t count on it.

Since the novel coronavirus pandemic began, there have been suggestions that, as with the flu, warm weather will dull the impact of SARS-CoV-2, the virus that causes COVID-19. However, until now, little research has been done to evaluate those claims.

UConn Center of Biological Risk and Department of Ecology and Evolutionary Biology researchers Mark Urban and Cory Merow, who is also affiliated with UConn’s Eversource Energy Center, have modeled the progression of SARS-CoV-2, and their work has produced a forecast about possible seasonal changes for the virus. The full paper is available on MedRxiv.

“One of the goals of the Center of Biological Risk is to provide forecasts of the risk associated with environmental change or variation,” says Urban. As the University moved course delivery online in response to the pandemic, “it seemed like the perfect opportunity to use the forecasting skills we have been developing at the center and try to do something to help with the efforts to protect human lives.”

Urban and Merow set out to build on studies published earlier this year on SARS-CoV-2, with hopes of providing a more thorough and complete analysis as new data became available.

“The studies done early on were certainly done with best effort but they lacked key ingredients that we have improved upon with this paper. While a full mechanistic understanding of the virus’ spread is lacking, I’m optimistic that we’ve provided a few useful insights with the data that is out there,” says Merow.

Merow explains that a key aspect apparent in early studies was reporting bias, which he and Urban minimized for their study. They also referenced previous laboratory studies that indicate how the new coronavirus and similar viruses were impacted by environmental factors that change season to season, including humidity, temperature, and UV light.

The researchers applied fine-scale weather and UV data to available global data on infection rates and compared trends. The model looked at rates after community transmission began, before intervention measures were put into place, and before immunity was present in the population. They also took into consideration demographic variables such as densely populated areas and the percentage of those over the age of 60 in the population.

“With this study we wanted to see the potential growth rate of the disease in the absence of interventions like social distancing or staying at home. We really wanted to understand the innate biology of SARS-CoV-2,” says Urban.

This understanding, the researchers say, can offer insights into other characteristics, like seasonality.

The model developed by Urban and Merow suggests that temperature changes and UV light intensity play a role in weather-based risk, accounting for about 20% of the variation in the potential growth rate of the disease. This means the northern hemisphere might see a slight, temporary decrease in virus transmission in the summer months, while the southern hemisphere will see increasing rates of transmission as they experience their winter. The abatement in transmission rates will subside in the fall when the northern hemisphere will see an uptick in infections when day length increases and the weather turns colder once again, the model predicts.

Merow says, “While we may see a slight decline in risk this summer, I think that it is important that people know there remains at least a 20% chance here in the North East, and 30-40% chance for some areas like the southern United States, we don’t see a decline, and that is considerable in terms of making policy.”

Urban cautions that even if there is a dip in transmission risk in the summer months, it won’t be as dramatic as some are expecting, and there is likely to be a quick return if current social-distancing measures are discarded, or in the absence of effective pharmaceutical treatments that could become available later this year.

In the absence of a vaccine or medications to treat the infection, the only way to improve the risk forecast is through policy interventions, the researchers say. Those include continued physical distancing measures, avoiding crowds, and contact monitoring.

Merow and Urban stress that these modeled scenarios, though they are the best current estimates for what may happen, are not set in stone. “If we have the policies and interventions in place, we will not see these maximum growth rates realized. It is up to the decision-makers to decide what level of interventions are necessary to prevent further outbreaks or the next outbreak that could occur later this year,” says Urban.

The researchers have been very careful in defining the uncertainties associated with their findings, Urban says. “Part of the science of prediction is being clear and transparent about that prediction. There are two parts to a prediction: the estimate and its uncertainty. Decision makers need to think about both aspects.”