I adore weighted blankets. These blankets, filled with pellets or beads and weighing anything from two kilograms to upwards of eight kilograms, are widely believed to improve sleep, reduce anxiety and boost concentration.

I love the thousands of beads of sensory goodness that descend over me, neutralising my nerves into submission. Perhaps I’m particularly drawn to this sensory experience because I have attention deficit hyperactivity disorder, and a weighted blanket quells my energy for a blissful moment or three. 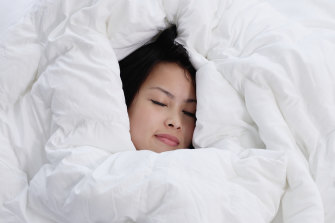 While science does not support their use, people may simply enjoy the way they feel.Credit:Getty Images

Yet the science is less clear, particularly for a range of issues such as autism, according to Dr Kate Simpson, who lectures in the Postgraduate Autism Studies Program at Griffith University in Queensland.

“Research has found that the use of weighted blankets does not improve the quality and quantity of sleep in children who have autism,” says Simpson. “This was investigated in a 2014 study where one group of children used a weighted blanket and the second group used a regular blanket, swapping after two weeks.”

If that’s the case, why do weighted blankets garner such glowing anecdotal reviews? Simpson says that while science does not support their use, people may simply enjoy the way they feel. “In the study, although there was no evidence to suggest the weighted blankets improved sleep quality, parents and children liked them.”

People who advocate for weighted blankets often do so on the basis of a therapy called deep pressure touch. This is believed to stimulate parts of the limbic system, which can influence the brain’s ability to process emotions such as fear, thus inducing feelings of calm and wellbeing.

In one study, published in the journal Occupational Therapy in Mental Health, 78 per cent of participants preferred to use a weighted blanket, given a choice.

However, as Simpson points out, “These studies were conducted with adults who don’t have autism. They were focused on different outcomes; assumptions shouldn’t be made that this would apply to children who have autism, for example.”

It seems the effectiveness of a weighted blanket comes down to many variables, not least the purpose of the individual using it. While some scientific literature might indicate benefits for people with anxiety, other studies might not report any difference in sleep quality when used, for instance, by children with autism.

Simpson agrees. “When deciding whether to use a weighted blanket, you’ve also got to ask questions like, ‘Will this benefit my child? Is there a scientific alternative? What am I hoping to achieve? Who am I using it on? What is the cost, and are there any risks?’ ”

Perhaps that is more to the point. While the science may not unequivocally endorse weighted blankets, their use is a personal choice. As long as the blanket’s weight safely aligns with the person’s size and capability, then the benefits, while subjective, may be real.

Stephanie Frazer, a mother of two, thinks so. She says weighted blankets have made a significant difference to the wellbeing of her nine-year-old son, who has been diagnosed with autism.

“My son asks for his weighted blanket in times of stress or change,” she says. “It visibly calms him down and helps him to regulate his reactions to external stimuli. There is no doubt in my mind that the pressure of this blanket benefits my son immeasurably, despite science not always validating this experience.”

This article appears in Sunday Life magazine within the Sun-Herald and the Sunday Age on sale March 15.