If you scan through the crowd at the starting line of one of the season's many fun runs, you might wonder if some of the attendees got lost on their way to a soccer match. 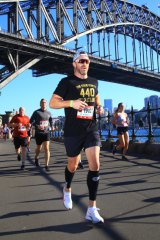 Sometimes called "leg sleeves" or "calfies", footless compression socks are compression gear, but just for your calves. They are becoming increasingly popular. But, are they worth it?

Director of Sydney's CSP gym and the 440 run club Todd Liubinskas says compression calf socks "saved" him while running his first City2Surf in August, so he wore them again for the Blackmores Half-Marathon in Sydney and the Melbourne Marathon earlier this month.

"As I had lower leg injuries from playing football and having taken up a lot of running the past year, I need preventative measures to make sure I can continue running in races and training efficiently," says Liubinskas, who is currently training for a 570km race in the US.

Although marketed as useful for people in a variety of fitness activities, he says he sees them most commonly used by runners, "particularly the weekend warriors who want to run a few times a week and not live with DOMS [delayed onset muscle soreness]".

The research on compression garments outside of a medical context (i.e. for people with conditions that cause inflammation) is not conclusive, says Christian Barton, a clinical physiotherapist at La Trobe University.

"From a sports perspective, there's lots of theories around why they might help, but none have been really well tested from a clinical trial perspective," he says.

A 2016 review published in Sports Medicine found compression clothing led to "trivial" and "small" improvements in performance. Some factors which affect performance during running were unchanged by compression garments (such as the runner's peak oxygen intake and blood lactate), and those that were (such as body temperature and "running economy" i.e. your heat exchange processes) were only improved to a small extent.

Looking at 32 small studies, this review found compression garments only had a "trivial" impact on times over a half-marathon, 10km, 5km and 400m sprint distance.

However, the review was more positive about the impact of compression garments on recovery, showing perceived reduced post-exercise pain, as well as small reductions in muscle damage and inflammation. A review published in the same journal the following year of 23 similarly small studies was also positive about the psychological benefit.

Locally, research conducted by the Australian Institute of Sport on Australian brand 2XU's compression tights between 2013 and 2017 has been more positive, finding the compression gear resulted in an 18 per cent increase in blood flow and a 47 per cent reduction in reported muscle soreness, with time gains of up to 10.6 seconds over a 5km run. However, the research specifically on the brand's "leg sleeves" was only undertaken on cyclists.

Dr James Broatch, who conducted the AIS research, says he doubts there would be much difference in the effect of wearing a leg sleeve as opposed to the full tight, as the benefits found in his research related largely to blood flow "which both leg sleeves and full length tights will assist with". Instead, he says runners should make sure their gear is sufficiently tight.

"Many brands just simply won’t provide the level of compression needed to have a worthwhile effect."

Barton says, although he would "not commonly recommend" compression garments to runners because they can be used at the expense of more valuable recovery routines ("they make people think they're doing something, when they should really be fixing their strength deficit or running technique"), he doubts the tights are harmful and says the psychological benefit probably does exist. He just doesn't think runners should rely on compression gear alone.

Instead, your primary post-run plan should be an active recovery: go for a relaxed walk or jog the next day.

Veronika Larisova, an exercise physiologist and ultra-marathon runner from Bondi, says she is also skeptical about wearing compression garments during a run, although she does see "a lot of people" wearing them in races she worries the apparel could be uncomfortable if too tight. Personally, she finds compression garments help her after a race.

"I sleep in them," she says, explaining that she used to wear the leg leeves when she was having swelling in her calves after long runs. "I do find that they help with inflammation."

Like most things you can buy to make you better at running (water packs, smart watches), footless compression socks are not particularly cheap: 2XU's are $60, fellow Aussie brand Body Science sells theirs for $40.

For this reason, Larisova says most recreational runners should be able to focus on forms of recovery which aren't as expensive: sleep, nutrition, and a close relationship with a foam roller should suffice.

"People fall into the trap of getting too technical; unless you're an Olympic athlete you can probably do things that are free and still get good results."