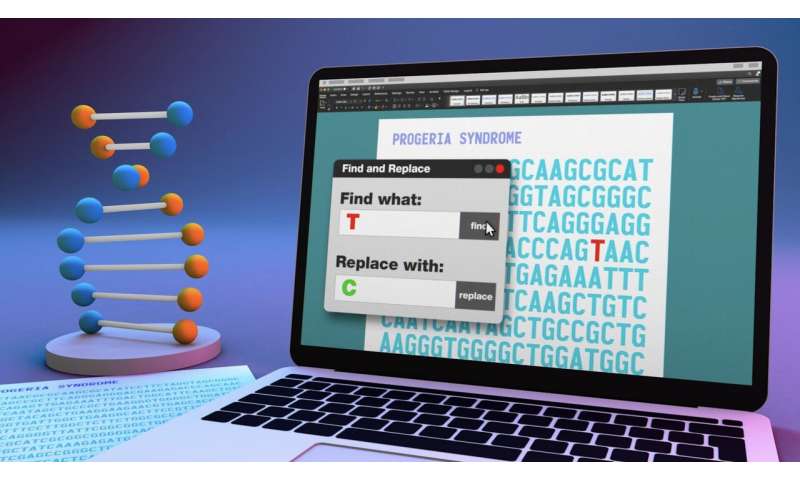 Researchers have successfully used a DNA-editing technique to extend the lifespan of mice with the genetic variation associated with progeria, a rare genetic disease that causes extreme premature aging in children and can significantly shorten their life expectancy. The study was published in the journal Nature, and was a collaboration between the National Human Genome Research Institute (NHGRI), part of the National Institutes of Health; Broad Institute of Harvard and MIT, Boston; and the Vanderbilt University Medical Center, Nashville, Tennessee.

DNA is made up of four chemical bases—A, C, G and T. Progeria, which is also known as Hutchinson-Gilford progeria syndrome, is caused by a mutation in the nuclear lamin A (LMNA) gene in which one DNA base C is changed to a T. This change increases the production of the toxic protein progerin, which causes the rapid aging process.

Approximately 1 in 4 million children are diagnosed with progeria within the first two years of birth, and virtually all of these children develop health issues in childhood and adolescence that are normally associated with old age, including cardiovascular disease (heart attacks and strokes), hair loss, skeletal problems, subcutaneous fat loss and hardened skin.

For this study, researchers used a breakthrough DNA-editing technique called base editing, which substitutes a single DNA letter for another without damaging the DNA, to study how changing this mutation might affect progeria-like symptoms in mice.

“The toll of this devastating illness on affected children and their families cannot be overstated,” said Francis S. Collins, M.D., Ph.D., a senior investigator in NHGRI’s Medical Genomics and Metabolic Genetics Branch, NIH director and a corresponding author on the paper. “The fact that a single specific mutation causes the disease in nearly all affected children made us realize that we might have tools to fix the root cause. These tools could only be developed thanks to long-term investments in basic genomics research.”

The study follows another recent milestone for progeria research, as the U.S. Food and Drug Administration approved the first treatment for progeria in November 2020, a drug called lonafarnib. The drug therapy provides some life extension, but it is not a cure. The DNA-editing method may provide an additional and even more dramatic treatment option in the future.

David Liu, Ph.D., and his lab at the Broad Institute developed the base-editing method in 2016, funded in part by NHGRI.

“CRISPR editing, while revolutionary, cannot yet make precise DNA changes in many kinds of cells,” said Dr. Liu, a senior author on the paper. “The base-editing technique we’ve developed is like a find-and-replace function in a word processor. It is extremely efficient in converting one base pair to another, which we believed would be powerful in treating a disease like progeria.”

To test the effectiveness of their base-editing method, the team initially collaborated with the Progeria Research Foundation to obtain connective tissue cells from progeria patients. The team used the base editor on the LMNA gene within the patients’ cells in a laboratory setting. The treatment fixed the mutation in 90% of the cells.

“The Progeria Research Foundation was thrilled to collaborate on this seminal study with Dr. Collins’s group at the NIH and Dr. Liu’s group at Broad Institute,” said Leslie Gordon, M.D., Ph.D., a co-author and medical director of The Progeria Research Foundation, which partially funded the study. “These study results present an exciting new pathway for investigation into new treatments and the cure for children with progeria.”

Following this success, the researchers tested the gene-editing technique by delivering a single intravenous injection of the DNA-editing mix into nearly a dozen mice with the progeria-causing mutation soon after birth. The gene editor successfully restored the normal DNA sequence of the LMNA gene in a significant percentage of cells in various organs, including the heart and aorta.

Many of the mice cell types still maintained the corrected DNA sequence six months after the treatment. In the aorta, the results were even better than expected, as the edited cells seemed to have replaced those that carried the progeria mutation and dropped out from early deterioration. Most dramatically, the treated mice’s lifespan increased from seven months to almost 1.5 years. The average normal lifespan of the mice used in the study is two years.