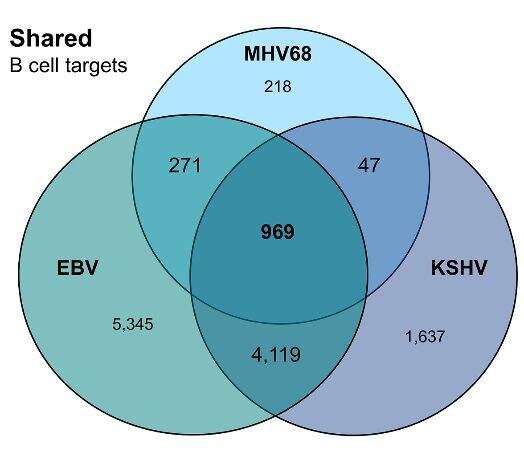 The discovery of thousands of host mRNAs targeted by gammaherpesvirus microRNAs (miRNAs) could shed light on the biology of gammaherpesviruses and how these pathogens establish lifelong infections, according to a study published August 8 in the open-access journal PLOS Pathogens by Scott Tibbetts of the University of Florida, and colleagues.

Gammaherpesviruses, including the human pathogens Epstein-Barr virus (EBV) and Kaposi’s sarcoma-associated herpesvirus (KSHV), establish lifelong infections in immune cells called B cells, and are associated with a variety of tumors. Within their genomes, these viruses encode numerous molecules called miRNAs, which target and suppress mRNAs—the products of specific genes—within infected host cells. However, the function of these miRNAs during infection in living organisms is largely unknown. Murine gammaherpesvirus 68 (MHV68) is a natural pathogen of rodents that is genetically related to both EBV and KSHV, and thus serves as an excellent model for the study of EBV and KSHV. But until now, the specific targets of MHV68 miRNAs were completely unknown.