Here’s a New Year’s resolution you can keep: Stop dieting and start savouring your food instead.

That may seem like surprising advice, but there’s mounting scientific evidence to suggest that diets don’t work. Research shows that food restriction just makes you want to eat more. And over the long term, dieting can backfire, triggering your body’s survival defences, slowing your metabolism and making it even harder to lose weight in the future. 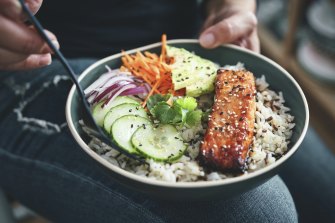 A resolution to quit dieting doesn’t mean giving up on having a healthier body. But to successfully conquer a dieting habit, you’ll need to let go of old ideas about counting calories, banning your favourite foods and measuring success by a number on a scale.

So what’s the alternative? Many weight researchers are encouraging a new approach to healthy eating based on brain science. A variety of techniques that encourage mindful awareness of how we eat, acceptance related to the foods we want to eat and intuitive eating exercises can be used to quell cravings and reshape our eating habits.

“The paradigms around willpower don’t work,” said Dr Judson Brewer, an associate professor in behavioural and social sciences at the Brown University School of Public Health who has studied mindful eating practices. “You have to start by knowing how your mind works.”

The case against restrictive diets

Kicking dieting habits this time of year is especially hard because of the allure of gimmicky weight loss plans. Many established diet programs and dieting apps try to attract users with the promise that they’re not promoting a traditional diet, only to impose restrictive eating practices once you sign up.

Traci Mann, who heads the health and eating laboratory at the University of Minnesota, notes that beyond the disappointment of not keeping weight off, dieting also impacts your body in a number of negative ways. Among other things, restrictive eating can impact memory and executive function, lead to obsessive food thoughts, and trigger a surge in cortisol, a stress hormone.

“A diet is an unpleasant and short-lived way to try to lose weight,” said Mann, author of Secrets From the Eating Lab: The Science of Weight Loss, the Myth of Willpower, and Why You Should Never Diet Again. “You might take it off in the short term, but it comes back. It happens no matter who you are; it happens to people with great willpower and to people with crappy willpower.”

If you’re still tempted to try that fad diet, consider this: evidence suggests that restrictive dieting and rapid weight loss can lead to lasting changes that may slow your metabolism, alter hormones that regulate hunger and hamper efforts to maintain your weight. A weight-reduced body responds differently to food and exercise than a body that has not dieted, studies suggest, and a dieter’s muscles may burn fewer calories than expected during exercise. These changes help explain why many chronic dieters may be eating far fewer calories than those around them but still aren’t losing weight, said Dr Rudolph Leibel, a professor of medicine at Columbia University’s Institute of Human Nutrition.

How eating habits are formed

One Brown University study of 104 overweight women found that mindfulness training reduced craving-related eating by 40 per cent. Another review by scientists at Columbia University found that intuitive and mindful-eating training often resulted in at least one benefit for metabolic or heart health, such as improved glucose levels, lower cholesterol or improved blood pressure

Brewer notes that eating behaviours, such as absent-mindedly snacking on potato chips or binging on dessert, are often the result of habit loops that get reinforced over time.

Habit loops can be formed from both good and bad experiences, says Brewer. Ice-cream, for instance, is something we might eat during celebrations. The brain learns to associate eating ice-cream with feeling good. Although there’s nothing wrong with ice-cream, it can become a problem when we start eating it unthinkingly after an emotional trigger, such as when we feel stressed or angry. Now our brains have learned that ice-cream also makes us feel good in times of stress, reinforcing the habit loop.

Over time, we can develop a number of habit loops that trigger us to eat when we’re bored, angry, stressed, tired after work or even just watching television. “What’s tricky about habit loops,” Brewer said, “is that the more automatic they become, over time you’re not even consciously choosing these actions.”

By understanding your own habit loops and the triggers behind them, Brewer said, you can help break the hold they have on you by updating your brain with new information. Mindfulness exercises, which prompt you to slow down and think about how and why you’re eating, can teach your brain that a “feel good” food doesn’t actually make you feel as good as you remembered. Practising mindfulness each time you reach for a food or decide to eat it can interrupt the habit loop.

Start practicing awareness by slowing down and thinking about what you’re eating and why you’re eating it. Try not to focus on weight loss, food restriction or eliminating favourite foods from your diet. Avoid labelling foods as “good” or “bad.” Your goal is to focus on the tastes and textures of food, and how you feel before, during and after eating.

It can take time to learn how to bring mindful awareness to what you’re eating, so be patient. In one study, it took participants at least 10 to 15 tries — and for many people it took 38 or more attempts — to begin to reshape eating behaviours. (I will be offering extra tips and coaching via text message during the challenge this month. Text the word “Hi” (or any word) to 917-810-3302 for a link to join. Message and data rates may apply.)

Here are two simple exercises from Brewer’s Eat Right Now program to get you started.

Begin with a premeal warm-up

Before every meal this week, try this simple awareness exercise. There’s no need to track what you eat or restrict your diet. Just check in with your body every time you eat. On a scale of zero to 10, with zero being an empty stomach and 10 being uncomfortably full, how hungry are you right now? Next, look at the food, observing the textures and colours. Now smell your food. Finally, pick up your fork and take your first mindful bite. As you chew, put your fork down and pay careful attention to how the food tastes and feels in your mouth. After several bites, check in with your body to see if you’re hungry or full.

Use this exercise to work on an eating behaviour you’d like to change, such as excessive snacking or ordering fast food. Our eating habits have three elements: a trigger, a behaviour and a result. By mapping your habits, you can provide your brain with new information about how the habit really makes you feel.

This article originally appeared in The New York Times.