The ongoing coronavirus disease-19 (COVID-19) pandemic, caused by severe acute respiratory syndrome coronavirus-2 (SARS-CoV-2) has claimed more than 2.8 million lives worldwide. Authorities are facing difficulty in preventing the spread of disease due to the highly infectious nature of SARS-CoV-2. Therefore, reducing the virus's ability to infect an individual's respiratory epithelial cells could prove an effective measure to prevent disease transmission.

SARS-CoV-2's Spike (S) protein is primarily responsible for facilitating entry into host cells. During this process, the S protein is primed by the transmembrane serine protease 2 (TMPRSS2), with the S1 domain of the protein interacting with the angiotensin-converting enzyme 2 (ACE2) of the host cell. Post interaction, ACE2, which is present on the lipid rafts of hosts' cell membranes, induces endocytosis, and thereby, infection occurs.

Many researchers have focused on preventing viral infection by blocking S protein's ability to interact with ACE2. This process requires novel inhibitors with a high affinity for the S protein. Another approach is developing ACE2 inhibitors by utilizing its native substrate, i.e., angiotensin II (Ang II) peptide, as a starting structure. The primary physiological function of ACE2 is to cleave a single amino acid from the C-terminus of the octapeptide Ang II which helps to control blood pressure.

ACE2 can be categorized as a gluzincin because of the presence of amino acid sequence coordinating to zinc at the Ang II binding site. Previous studies revealed that this class of metalloprotease undergoes catalysis via nucleophilic addition of a water molecule, coordinated to zinc in the ACE2. Even though Ang II has a high affinity towards ACE2, it does not share an active binding site with S protein. Hence, Ang II cannot solely inhibit the binding of S protein. However, researchers perceived that incorporation of a peptide-nanoparticle conjugate to Ang II peptide would enable blocking of the receptor site, which would inhibit the interaction between S protein and ACE2.

A new study, published on the bioRxiv* preprint server, seeks to determine Ang II mutants from previous studies and identify new Ang II mutants' sequences that possess a high binding affinity to ACE2, using computational methods. In this study, the native peptide and each Ang II mutant were docked to zinc in all probable coordination sites found within the peptide by replacing the existing water molecule at the coordination site. The potential impact of peptide binding to ACE2 on the structure of the S protein binding region was also evaluated.

Many scientists have adopted computational methods to discover molecules essential for designing new drugs. In this method, the possible inhibitors are docked to the receptor, after which molecular dynamics (MD) simulations were carried out, and binding free energy is calculated. This technique helps to accurately determine new potential inhibitor molecules for S protein and ACE2. This molecule is later validated through various experiments in the laboratory. The experiments' success depends heavily on assigning appropriate parameters to all atoms and interactions obtained MD simulations and subsequently calculating free binding energy.

The current research selected mutants based on the results of the previous study which evaluated the peptides DRVYVYPF, and DRVYIYPF. Both the mutants had exhibited potent inhibition of ACE2 than the native Ang II on a quenched fluorescent substrate assay. These mutants also showed higher stability to enzymatic degradation. The previous study revealed that the 6th residue of Ang II could play a vital role in binding to ACE2. In the current study additionally, DRVYIEPF was also considered. Researchers have incorporated cysteine and glutamate as the 6th residue as they can bind to the zinc ions. The 4th amino acid residue was also studied. This study revealed that the native Ang II and DRVYVYPF form a complex to ACE2 with a significantly strong binding free energy. It was also observed that the 4th amino acid residue of the mutant sequence bound to zinc coordinates. 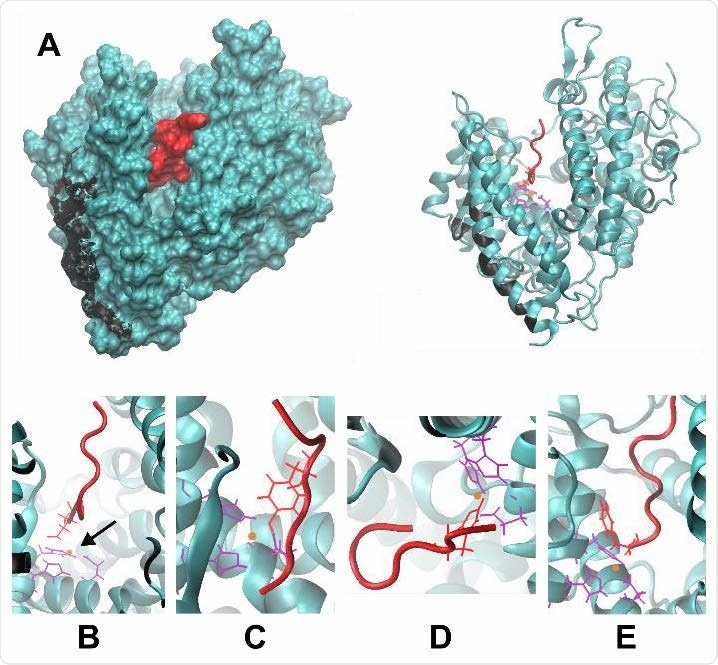 (A) The structure of Ang II (red) bound to ACE2 (teal). The cleft in ACE2 where Ang II resides is visible in both the surface-rendered image (left) and the ribbon diagram (right). The residues on ACE2 that interact with spike protein are shown in black. (B-E) Magnified views of Ang II-ACE2 binding, depicting the coordination of Ang II to zinc (orange) at four possible residues of D, Y, H, and the C-terminus, shown in B, C, D, and E, respectively. Corresponding coordinating residues on ACE2 are shown in purple.

One limitation of this study is the lack of entropy calculations MM/PBSA protocol, but as the error tends to be marginal, it would not contradict the projected result. This study also did not include the impacts of kinetics as it requires more computationally expensive techniques.

Thereby, this research revealed that among the sequences studied, only one the native Ang II sequence exhibited strong binding energy and could bind to the ACE2 cleft. The strong binding energy was related to the tyrosine residue in the fourth position of the peptide sequence coordinating to the zinc atom in the cleft. Another interesting conclusion of this study is that the S1 binding region and mutant Ang II peptides alone cannot block the interaction between ACE2 and S protein. This research opens new means to design novel new strategies that could prevent viruses' binding to cells.