“Come here, you beauty, and let me give your lovely coat a bit of a brush,” says John, 69. As he slowly rubs the giant ­animal’s side with a practiced hand, his grin changes into a deep look of contentment and Murphy responds to his gentle touch with a nod of his mighty head. Only when the horse’s coat is gleaming does John move around to his tail and within minutes, it’s immaculately clean and tidy. “You’re very handsome now, aren’t you?” John tells Murphy. “In fact, he’s the pride of the stables.”

The rapport between the powerful horse and the rather frail man is instant and natural – and the joy that connection brings to his wife Joan, watching from the sidelines, is priceless.

Because John suffers from dementia and is taking part in an unusual farm memory scheme at the National Trust-owned Wimpole Home Farm, near Royston, Cambridgeshire.

The Trust has discovered that allowing dementia patients to experience the sights, smells and sounds of life on the farm has an almost magical effect on their health and their spirits.

This is especially true for those who lived or worked in the ­countryside when they were well. 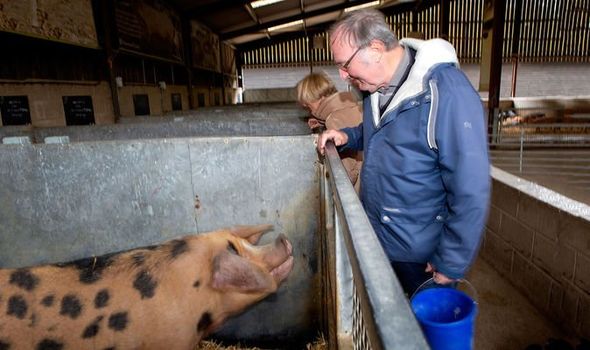 For John – who has Lewy Body Dementia, which can cause tremors, confusion and hallucinations – it ­provides an almost ­immediate relief from his ­debilitating symptoms.

After grooming Murphy, he turns his attention to feeding the pigs.

As Joan leads him across to the barn, John grabs some apples then laughs out loud as the animals greedily devour their snack, while a crescendo of oinks almost raises the roof.

“Listen to all those hungry pigs,” he chuckles. “It’s a bit of din, but it’s fantastic to hear. They’re all chattering away, asking for food… just wonderful.”

Joan, 71, says signing John up for the National Trust’s farm memory scheme is one of the best decisions she has ever made.

“His mood lifts the minute we start walking around the farm,” she says.

“It’s just incredible. He gets so much from being with the animals and just being in the country.”

John grew up in Manchester but as a boy, spent most of his spare time in the great outdoors. When he worked as a printer in Swindon, he and Joan dashed to the nearby countryside most weekends.

Now they live in Barrington, a village near the farm, to be close to their daughter and two grandsons.They relish their weekly trips to Wimpole Home Farm. 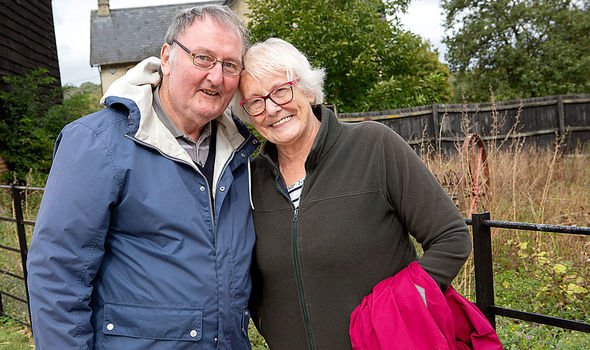 Another beneficiary of the ­memory project is retired farm manager Don Leitch, 75, who is also battling Lewy Body Dementia. He is less mobile than John and ­suffers from tremors similar to Parkinson’s disease.

When his wife Jenny asks him if he misses farming, Don tells her: “Very much so. When I eventually retired, it was like cutting your hands off. You couldn’t do what you had spent your wholelife doing.”

Seeing, touching and listening to sheep, cattle, horses and donkeys is a natural therapy.

It is a trip down memory lane which sends Don’s thoughts straight back to happier times when he was in robust health.

Jenny says: “Like most farmers, Don was always the practical one, the problem solver.

“He could turn his hand to anything. Then suddenly, he couldn’t do the things he used to love to do, which was very difficult for him.

“Because they are so busy, ­farmers don’t really have time for hobbies so, when they retire, it is quite a sudden change in their lives.Coming here once a week, when he is able, is great for Don. He finds it so rewarding feeding the animals and talking to them.

“He is living in the moment and all sorts of memories are coming back to him.

“Coming here gets him talking and ­energised. There is a glint in his eye, he’s more like the man I married.” Jenny adds: “When he gets home, he feels as if he’s done a day’s work down at the farm, like he used to do. For me, it’s lovely to see him contented that way.” 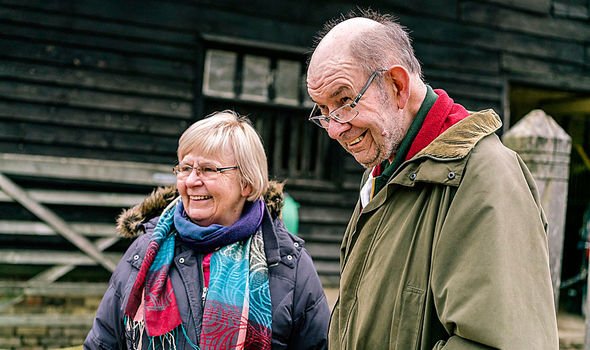 At their home in South Cambridgeshire, Don sleeps a lot during the day which, Jenny admits, does make her feel lonely, especially as she is still fit and ­mentally agile.

“I think he thinks he might get better,” she says sadly. “There’s no road map. You don’t know where you are going.

“You take each day as it comes and hope it will be a good day.”

One of the benefits of the weekly farming memory visits is that Jenny gets the chance to meet other partners in a similar situation to herself.

“Sharing these farming activities in each other’s company is very good for everyone and very ­positive,” she says.

“You always come away smiling, there’s always a bit of fun.”

National Trust volunteer Maureen Hersee, 71, came up with the idea for the project after ­witnessing the effect the farm ­environment had on her late mother Edna, 94, who suffered from severe dementia. Farming has been central to her family’s life for generations and Maureen herself was born on the family farm at Castle Gresley, South Derbyshire.

“Being on the farm meant ­everything to my mother, so she really missed it when she had to go into a home,” says Maureen.

“The dementia got so bad I couldn’t really have conversations with her, but when I brought her down here to Wimpole Home Farm, I had my old mum back.

“She would talk, she could even remember the names of the horses we used to have.

“She knew what cattle we had and how we used to look after them. It was just astonishing to see. There wasn’t a problem with her memory when she was here.

“The smells and the sounds brought all the lovely family memories flooding back.” 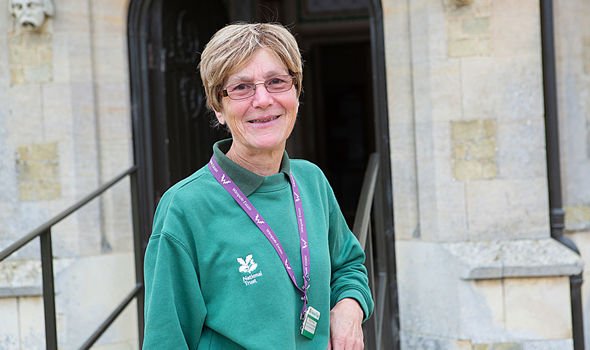 Maureen is convinced the farm visits help dementia sufferers reconnect with memories that had seemed to be completely lost.

She said of her mother: “When I took her back to the home again, she would have no recollection of anything.

“Visiting farms stimulates ­long-term memory, I have no doubt about that.

“We have six or so couples who come each week and they all get a benefit, which is great for us to see.

“We are very lucky in having such a big farm here, so there is plenty to do all the time.”

Since the National Trust bought the 2,500-acre farm in the 1970s, it has become fully organic. Some 1,000 acres are used for arable farming and produce barley, oats, rye and peas.

“Our aim for the parkland is to promote floristic diversity,’’ says farm manager Callum Weir, 28.

“We’re doing well with rare ­flowers like Great Bee Orchid and Yellow Rattle, which are a delight to see for our 350,000 visitors a year.

“There are also plenty of rare breeds on our parklands, including White Park cattle and Leicester longwool sheep.”

Large borders on the fields ­provide a habitat to boost declining birds such as corn bunting, yellow wagtail and turtle doves.

But it also provides an even more valuable habitat for visitors such as Don and John – it allows them to spend precious time away from a world of stress and ­confusion in an environment that feels like coming home.