More than 900 children and young adults have been killed by the measles epidemic in Madagascar, with babies most at risk of contracting the deadly virus.

There have been more than 68,000 cases of the disease since the outbreak began on the African island in September, according to the World Health Organisation (WHO).

Low immunisation rates of under 60 per cent have been blamed for the high rate of measles in the poor nation over the years.

Those most at risk are infants from nine to 11 months old and malnourished children – and Madagascar has Africa’s highest children’s malnutrition rate at 47 per cent.

In response to the outbreak, 2.2million of the 26 million population have been vaccinated in emergency, the WHO said.

Meanwhile, cases have soared by 300 per cent worldwide in the last year, erupting across the US now.

Measles is a highly contagious viral disease, which can be prevented, that can cause complications including blindness and brain swelling and increase susceptibility to other diseases. 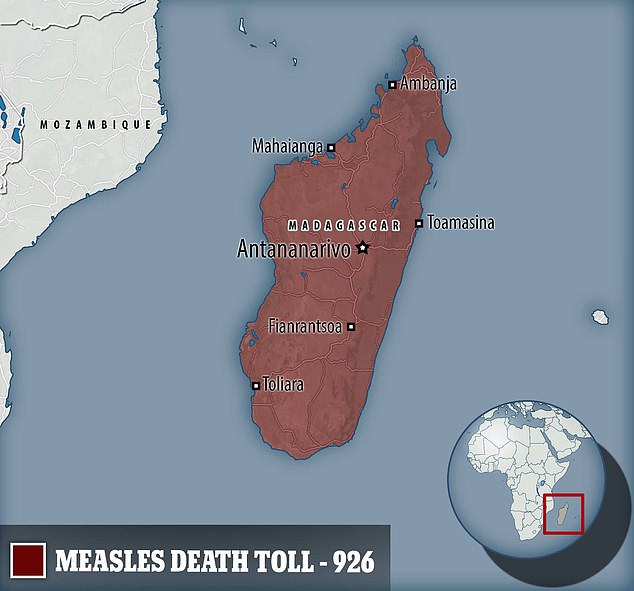 According to WHO figures, there have been more than 68,000 cases of the disease.

Although the figures are likely to be incomplete, 553 deaths are confirmed and another 373 suspected.

WHO spokesperson Tarik Jasarevic said there have been concerns for the countries low immunisation for a long time.

In 2017 only 58 per cent of the population had been vaccinated against measles.

Madagascar had seen the number of reported measles cases sharply decline since 2004 and until 2016.

Officials launched a nationwide campaign to try to bring the outbreak under control, through mass vaccination campaigns and surveillance.

Some of those had previously been vaccinated but had only received one shot, and so were given the more standard second, ‘booster’ jab.

‘We believe that that should go a long way towards stemming the current outbreak,’ she said.

Madagascar, which is in the Indian Ocean, plans to standardise on a routine two-dose vaccination programme later this year.

A lack of access to the vaccine is often the problem in poorer countries, marginalised communities and states in conflict and the overwhelming majority (more than 95 per cent) of measles deaths occur in countries with low per capita incomes and weak health infrastructures.

But in wealthy areas where vaccination coverage has been historically high, such as Europe and the US, experts blame declining vaccine rates in part on complacency and misinformation about the vaccine.

WHO warned recently that efforts to halt the spread of measles were ‘backsliding’, with case numbers worldwide surging around 50 percent last year.

‘Our data are showing that there is a substantial increase in measles cases. We’re seeing this in all regions,’ Katherine O’Brien, WHO’s director of immunisation, vaccines and biologicals, told reporters in Geneva.

‘We’re having outbreaks that are protracted, that are sizable and that are growing,’ she said. ‘This is not an isolated problem.’

The resurgence of the disease in some countries has been linked to medically baseless claims linking the measles vaccine to autism, which have been spread in part on social media by ‘anti-vaxxers’.

‘We’re backsliding on the progress that has been made,’ O’Brien said.

‘We’re backsliding because of the failure to vaccinate.

‘When we see the reported cases increasing by 50 per cent, we know that we’re heading in the wrong direction,’ she said, adding that the true number of infections was ‘in the millions’.

Most measles-related deaths are caused by complications associated with the disease, including blindness, encephalitis (an infection that causes brain swelling), severe diarrhoea, dehydration, ear infections, or severe respiratory infections such as pneumonia.

Last year, measles caused approximately 136,000 deaths around the world, mostly under the age of five, according to WHO’s preliminary figures.

In 1995, gastroenterologist Andrew Wakefield published a study in The Lancet showing children who had been vaccinated against MMR were more likely to have bowel disease and autism.

He speculated that being injected with a ‘dead’ form of the measles virus via vaccination causes disruption to intestinal tissue, leading to both of the disorders.

After a 1998 paper further confirmed this finding, Wakefield said: ‘The risk of this particular syndrome [what Wakefield termed ‘autistic enterocolitis’] developing is related to the combined vaccine, the MMR, rather than the single vaccines.’

At the time, Wakefield had a patent for single measles, mumps and rubella vaccines, and was therefore accused of having a conflict of interest.

Nonetheless, MMR vaccination rates in the US and the UK plummeted, until, in 2004 the then-editor of The Lancet Dr Richard Horton described Wakefield’s research as ‘fundamentally flawed’, adding he was paid by attorneys seeking lawsuits against vaccine manufacturers.

On January 6 2011, The British Medical Journal published a report showing that of the 12 children included in Wakefield’s 1995 study, at most two had autistic symptoms post vaccination, rather than the eight he claimed.

At least two of the children also had developmental delays before they were vaccinated, yet Wakefield’s paper claimed they were all ‘previously normal’.

Further findings revealed none of the children had autism, non-specific colitis or symptoms within days of receiving the MMR vaccine, yet the study claimed six of the participants suffered all three.