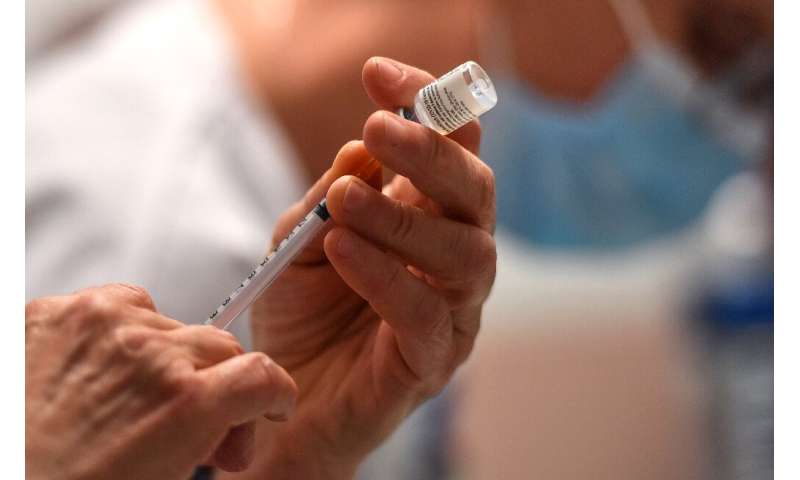 The spread of more infectious coronavirus strains in Britain and South Africa, with isolated cases of the UK variant appearing in dozens of countries, has made inoculating a maximum number of people as quickly as possible more urgent than ever, experts say.

Here’s a rundown on how the vaccination story is unfolding:

Drugmakers worldwide defied predictions by finalising not just one vaccine in record time, but half a dozen.

“To have multiple vaccines authorised before the end of 2020 is truly remarkable,” said Richard Hatchett, CEO of the Coalition for Epidemic Preparedness Innovations.

The European Medicines Agency (EMA) on Wednesday approved the US-made Moderna vaccine, having already given a green light December 27 to one made by Pfizer/BioNTech for use in the European Union.

Both are so-called mRNA vaccines, based on a new technology previously untested in a real-world situation, and have been approved in the United States as well.

A third, more conventional vaccine made jointly by researchers at the University of Oxford and the biotech firm AstraZeneca got a green light last week from Britain, followed by India and Argentina.

Russia began inoculating its population with its own Sputnik V vaccine even before the completion of last-stage Phase 3 trials.

State-run companies in China—where the pandemic began more than a year ago—have also seen their vaccines administered months before trials had finished.

A jab produced by Sinopharm jab got “conditional” approval only last week.

All five of these vaccines were designed to be given in two doses, separated by 21 or 28 days, but many countries are poised to extend that period so as to increase the number of people given a first jab.

Another half-a-dozen vaccines are in Phase 3 trials, the last step before authorisation, including a single-dose one from Johnson & Johnson subsidiary Janssen, according to the World Health Organization (WHO).

How do they work?

The Pfizer and Moderna vaccines use an inert snippet of genetic code from the SARS-CoV-2 coronavirus to trigger a immune response in the body that can repel the active virus. 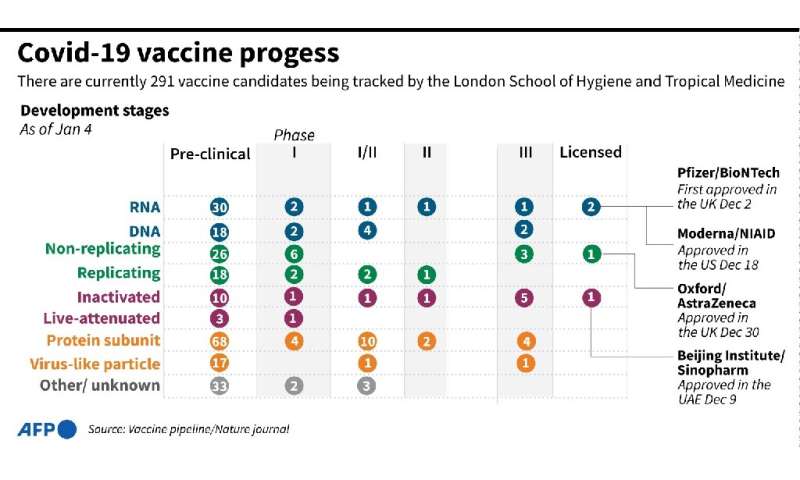 The other vaccines are variants of the same method used for flu jabs, based on virus that has been killed and rendered harmless.

“The Pfizer vaccine provides a mRNA blueprint to educate the immune system as to what it needs to fight against,” explained James Gill, a clinical lecturer at Warwick Medical School.

“By contrast the AstraZeneca vaccine shows the immune system a deactivated version of the common cold dressed up to look like COVID-19, as far as our immune system is concerned.”

China and Russia began inoculating people within their borders months ago, before any of their vaccines had been approved by national health authorities.

As of the start of 2021, 4.8 million people in China have been vaccinated, and 800,000 in Russia, according to official figures compiled by AFP.

Britain was the first western nation to initiate a vaccination programme, with nearly a million people having received a first jab by the end of 2020.

Its government has ordered 100 million doses of the Oxford vaccine, and aims to inoculate 10 million people in four priority groups by mid-February.

The Pfizer and Moderna vaccines approved in the United States have been given to nearly five million people so far.

The US has reported 21 million confirmed COVID-19 cases and more than 357,000 deaths, more than any other country.

India—with more than 10 million cases and 150,000 dead, second only to the US—approved the Oxford vaccine and another from a domestic drugmaker, Bharat Biotech, only this week.

Argentina and Algeria are the only nations to have lined up for Russia’s Sputnik V jab, while Brazil has contracted to buy five million doses of the Bharat Biotech vaccine.

The Chinese Sinovac and Sinopharm vaccines have been approved or distributed in Indonesia, the United Arab Emirates and other Arab nations. Turkey, Brazil and Chile have also signed deals to secure doses. 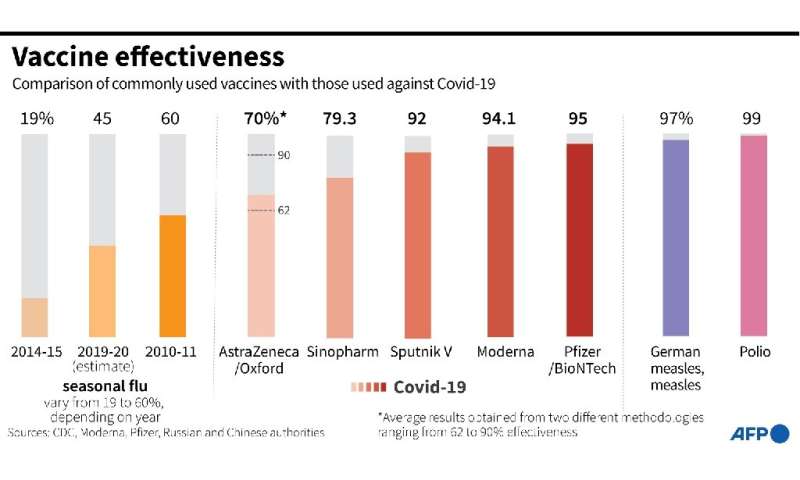 Israel leads the world in per capita vaccination, with 1.37 million of its inhabitants—17 percent of the population—injected with a first dose as of January 4, according to the Oxford Martin Programme on Global Development.

So far, some 15 million people worldwide have been vaccinated. The global population is 7.8 billion.

“There is no value in just vaccinating one country or one population,” said Jeremy Farrar, Director of Wellcome.

“Vaccines must be available to the whole world at the same time.”

Which ones are best?

The Pfizer and Moderna vaccines both reported efficacy rates above 90 percent, and were the first to meet approval by health authorities in the US and Europe.

The two-dose Oxford jab provided a similar level of protection in trials, but only if the first jab was a half-dose, the manufacturers said.

The Russian vaccine was also claimed to be 90-percent effective, but the underlying data has yet to be published.

The mRNA-based vaccines, however, are expensive and must be stored and transported at ultra-cold temperatures—minus 20C for Moderna, and minus 70C for Pfizer.

By contrast, the Oxford/AstraZeneca vaccine can be kept in an ordinary fridge and costs only 3 euros ($4) a dose.

“It is extremely attractive in that it is inexpensive, scalable, and can be stored at 2-8 degrees Celsius,” said Hatchett.

It is also the only one made on a not-for-profit basis, putting it more easily in reach for developing and poor nations.

What about transmission and the new strain?

It is still unclear whether the vaccines being snapped up around the world only protect against symptoms, or prevent infection of others as well. 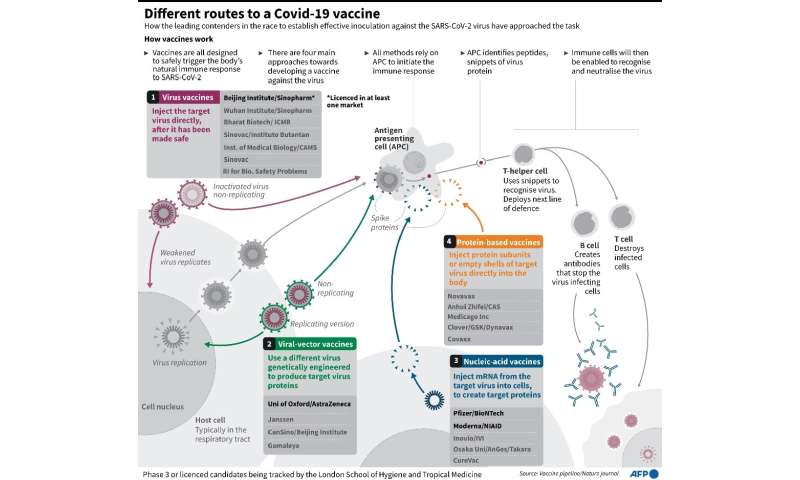 “We remain uncertain about the impact the vaccines have on transmission,” said Gail Carson, deputy chair of the Global Outbreak Alert and Response Network.

Until that becomes clear, even people who have received a jab should continue to take measures to prevent the virus from spreading.

“Recipients of the vaccine will still have to follow distancing, hand-washing and other non-medical interventions to protect themselves and those around them,” said Stephen Evans, a professor at the London School of Hygiene & Tropical Medicine.

“No vaccine is 100-percent effective and behaving as if it were will serve to prolong the pandemic.”

As for the more contagious strain that has swept across Britain, there is no evidence so far that vaccines will prove less effective against it, according to the European Centre for Disease Prevention and Control (ECDC).

Two doses or one?

With the virus still raging across much of the world, and the threat of a strain that could be up to 70 percent more contagious, experts differ on whether it is best to respect the two-dose protocols of the clinical trials or to postpone the second jab so more people can get the first one quickly.

“The trials did not compare different dose spacings or compare one versus two doses, so we simply do not know what is ‘optimal’,” said Stephen Evans, a professor of pharmacoepidemiology at the LSHTM.

“But we know that vaccinating only half of a vulnerable population will lead to a notable increase in cases of COVID-19,” he added.

“When resources of doses and people to vaccinate are limited, then vaccinating more people with potentially less efficacy is demonstrably better than a fuller efficacy in only half.”

At the end of the day, experts say, the objective must be to vaccinate as many people worldwide as possible to pass the “herd immunity” threshold that will see the virus retreat for lack of hosts to infect.

Most scientists put that threshold at around 70 percent.

If one assumes—as do many epidemiologists—that there are about 10 times as many infections as confirmed cases, that would mean less than a billion people have gotten the virus so far.