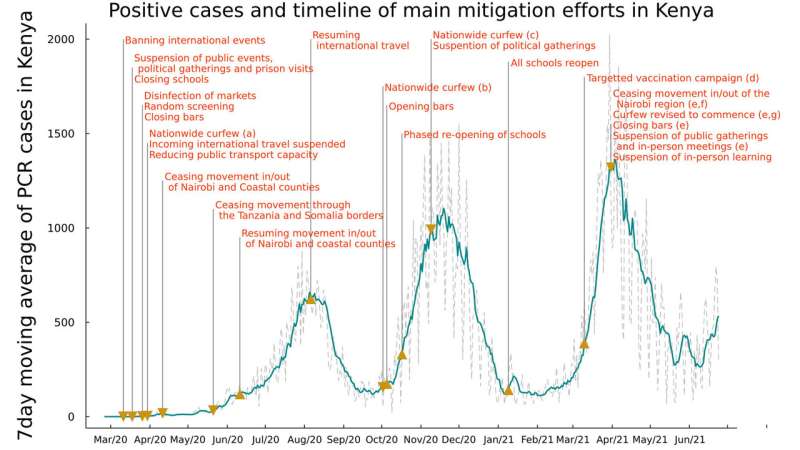 Combining data on antibody prevalence, PCR test results, genomic surveillance and population mobility from smartphones has allowed infectious disease modelers to explain the evolution of the first three COVID-19 waves that have affected Kenya since the start of the pandemic.

Modeling jointly undertaken by the University of Warwick and KEMRI-Wellcome Trust Research Programme in Kenya explains the COVID-19 pandemic in Kenya as sequential waves of transmission through different socio-economic groups, followed by infection boosted by the introduction of new variants.

The study has been published in the journal Science and received funding through the Joint Initiative on Research in Epidemic Preparedness and Response, a collaboration between Wellcome and the Foreign, Commonwealth and Development Office (FCDO), as well as funding from the National Institute for Health Research (NIHR).

Forecasting the future spread of COVID-19 requires an understanding of past patterns. The team used a mathematical model to test explanations for the first three COVID-19 epidemic waves in Kenya.

The work, undertaken jointly by scientists at the University of Warwick and the KEMRI-Wellcome Trust Research Programme in Kenya, for the first time brought together COVID-19 antibody survey data, PCR case data, genomic variant data and Google mobility data, seeking to find an explanation to the waves of COVID-19 in Kenya. The aim was to then provide policy-based forecasts on future waves in the country based on the model findings.

Lower socio-economic groups have been identified as vulnerable to SARS-CoV-2 in the global South due to residence in informal settlements at high population density, reduced access to sanitation, and dependence on informal employment that requires daily mobility. In contrast, those from higher socio-economic groups with job security can work from home, physically distance and readily access water and sanitation, thereby decreasing transmission.

Multiple waves have been observed in many other African countries that do not appear to be completely explained by the timing of restrictions, and since they also have in common similar socio-economic groupings in urban centers, the scientists speculate that these explanations may apply more widely. Understanding the causation of such multiple waves is critical for forecasting hospitalization demand and the likely effectiveness of interventions including vaccination strategy.

Dr. Samuel Brand from the University of Warwick’s Zeeman Institute for Systems Biology and Infectious Disease Epidemiological Research (SBIDER), and School of Life Sciences said: “This is one of the first studies to consider detailed predictions of the dynamics of COVID-19 across multiple waves in tropical sub-Saharan Africa. We believe this sets a new standard for the type of public health modeling work that can be conducted in real-time in developing countries.”

Dr. John Ojal of KEMRI-Wellcome Trust Research Programme said: “There are highly detailed modeling studies of this nature in High Income Countries, but there have been none previously in tropical sub-Saharan Africa.”

Professor Matt Keeling, Director of the Zeeman Institute at the University of Warwick, said: “Studies in High Income Countries find the assumption of even mixing of the population works well in explaining the transmission of SARS-CoV-2 in those countries. Clearly, this is not always the case as shown in our study of Kenya, and variation in spread by socio-economic group might prevail in other low income settings.”