Ask any beauty junkie what their favourite treatment is and it's likely they will say the LED light. Lying underneath the warm light, either after a facial or as a standalone treatment, feels akin to being in repose on a pool-side lounger, cocktail in hand, minus the sun damage.

LED (which means light-emitting diode) works by exposing skin cells to the light which stimulates them and helps boost efficiency and repair damage. Research has found it to be a safe treatment for scars and burns. 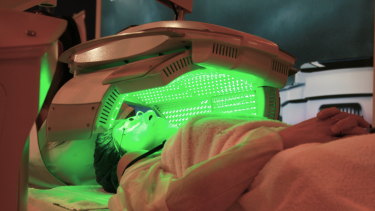 LED light is being used for a number of cosmetic and wellbeing reasons. Credit:iStock

When it comes to cosmetic use, the red light, for example, is typically used to boost collagen and elastin while the blue light is used to reduce inflammation and kill bacteria. LED lights don't have UV light.

However while LED light treatments have existed since 1903, their application for both cosmetic and wellbeing use is still considered an exciting area of research and development.

For Hanish, an American who grew up in Minnesota, home to famously cold and dark winters, the impact LED light therapy has on wellbeing is what he finds most interesting about the treatment.

"It's like you've been lying on the beach for a few hours, every cell is stimulated, and so is hormone production such dopamine [the feel-good chemical]," he says.

"It really enhances people's mood. One of the biggest things [we see] is how stressed people are at home or work. You pop them under the light at the end of a session and they get up from the table and say they feel so much better."

The cosmetic pay-off of glowing skin is an added bonus.

Dr Min Yeo, a functional medicine general practitioner, agrees there may be a wellbeing benefit to the use of LED light therapy treatments but said they still fall within the "slightly experimental" realm of use and are an emerging field of medicine.

She stresses the important of quality control, research and the right amount of dosage.

"As with all emerging therapies, I would advise caution … there could be long-term adverse effects that we are not aware of as yet. If you do [use them] ensure that the devices are TGA approved if possible and that the operator is qualified/insured,"she says.

As with all emerging therapies, I would advise caution … there could be long-term adverse effects that we are not aware of as yet.

Dr Hanish, who has a bachelor of science and a doctor in chiropracty, says people use the laser treatment for a variety of reasons including to help with persistent problems such as tendonitis or recovery from a fun run.

He says his clinic is showing people are increasingly becoming more interested in their general wellbeing and seeking out alternative or complementary therapies.

"People are starting to talk more about different therapies, I think they've realised they might want to feel good all the time, not just some of the time. Often we only work on disease and treatment or wait until something is wrong before acting …  people are looking at ways to prevent problems occurring and finding ways to be healthier."