Overcoming the challenges in managing type 1 diabetes can sometimes feel like an unappreciated “superpower.” That was part of the thinking behind the creation of a comic book trilogy that aims to educate people of all ages — including healthcare providers — about the realities of living with this condition.

The series was initially launched by a team from Portsmouth Hospitals University NHS Trust and University Hospital Southampton NHS Foundation Trust, United Kingdom. It is now officially backed by the National Health Service (NHS). The first book in the trilogy, published in 2016, visually illustrates the challenges faced by a teenage boy who had recently been diagnosed with type 1 diabetes. The second volume, released in 2018, follows a young girl who is hospitalized with diabetic ketoacidosis (DKA). The third, published in December 2020, explores the stigma associated with diabetes and delves into hypoglycemia.

Available for free online, the three comic books are meant for adults, kids, healthcare professionals, and laypeople. Medscape spoke with series co-creator Partha Kar, MBBS, MD, national specialty advisor, Diabetes for NHS England, about the series. This interview has been edited for length and clarity

Medscape: How did the idea for a comic book series about type 1 diabetes come about?

Partha Kar, MBBS, MD: My Southampton colleague Dr Mayank Patel and I were discussing ways of reaching different audiences to raise awareness about type 1 diabetes, and we had the idea of comic books. After all, comic book movies are among the biggest blockbusters if one looks at popular culture, because it’s not just kids watching them.

One of our patients made an interesting observation that really resonated. He said having type 1 diabetes was like the Marvel Comics superhero Hulk.

Several scenes in the first publication, Type 1: Origins, were based on the Hulk, a scientist who gets a radioactive dose by accident. He doesn’t like turning green when he’s angry, even though he also becomes very strong. He basically spends the rest of his life trying to find the cure for himself, but he eventually makes the best of his two worlds — Professor and Hulk — rather than constantly fighting his situation. 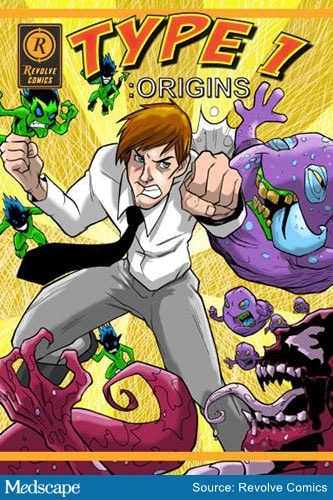 The story line was primarily written by a group of patients with type 1 diabetes based on their own experiences. Mayank and I were mostly just supervising and financing the project. The graphics and layout were done by Revolve Comics, a publisher specializing in health education via the comic book medium.

Our aim was to bring awareness of type 1 diabetes to people who don’t have diabetes, including teachers, family members, and friends. At the end of Origins, we provide a list of online resources for more information and for social connection.

Since it launched in October 2016, Origins has been downloaded nearly 10,000 times. Lots of local charities and schools have picked it up. Parents and kids have come to us asking for more and giving us ideas. That’s what prompted the next one.

The second volume, Type 1: Attack of the Ketones, is more technical and somewhat surprising in that it portrays some hospital staff members as not well-informed about type 1 diabetes. Are they part of the intended audience?

Yes, this one was directed a little bit more towards professionals, hospitals, and staff. It’s also informed by patient feedback, and dovetails with my efforts to improve hospital care for people with type 1 diabetes. But of course, patients and interested laypeople can also learn from it.

A theme in Volume 2 comes from another Marvel Comics superhero, Iron Man. In the movie, when Tony Stark’s heart is severely damaged with shrapnel, he acquires an arc reactor that keeps him alive and also powers the suit that gives him superpowers. After the reactor is taken away, he devises a way to replace the missing part and reassemble the suit.

Similarly, in type 1 diabetes, the ability to produce insulin has been taken away without permission. But what is missing can thankfully be replaced, albeit imperfectly. As we illustrate, things don’t always go to plan despite best efforts to administer insulin in the right dose at the right time. 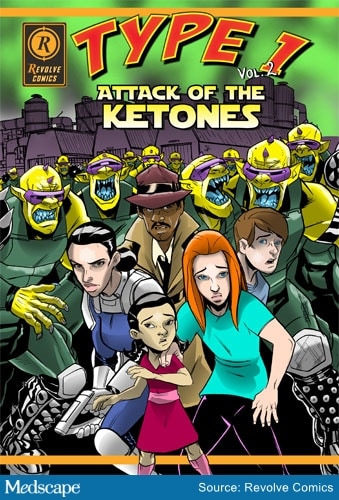 At the end of Attack of the Ketones, we provide two pages of text about recognizing and managing hyperglycemia and preventing DKA. This volume was funded by NHS England and then backed by JDRF and Diabetes UK, and many hospitals picked it up. It has had about 8000 downloads.

In Volume 3, you explore stigma and the issue of language regarding type 1 diabetes. How did those topics come about?

Kar: Type 1 Mission 3: S.T.I.G.M.A. was also based on patient feedback, with input from some Indian diabetes groups I’ve worked with. Here, the protagonist is a young man with type 1 diabetes who goes on holiday to India, where diabetes stigma is widespread. The characters address language problems such as use of the word “diabetic” to label a person, and they counter misconceptions such as that diabetes is contagious. There’s an Indian comic book version of this volume out now. 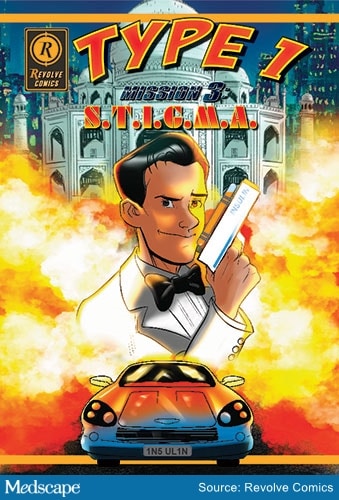 The main character of this volume experiences severe hypoglycemia and is saved by a glucagon injection from a colleague, one of several presented as superheroes who help in the fight to end diabetes stigma. They are referred to as Guardians of the Glucose, a take on yet another Marvel franchise, Guardians of the Galaxy.

At the end of this volume, we provide two pages of text about recognizing, managing, and preventing hypoglycemia. Again, we hope to educate as wide an audience as possible.

At the end of Volume 3, you also briefly mention the COVID-19 pandemic. Will there be a fourth volume dealing with that, or other topics, such as diabetes technology?

We’ve left it open. We want to see how volume 3 lands. Depending on that, we might take it forward. There are certainly plenty of topics to tackle. We’ve also discussed moving into gaming or virtual reality. Overall, we hope to educate people by engaging them in different ways.

Partha Kar, MBBS, MD, has been a consultant diabetologist/endocrinologist within the NHS since 2008. He has disclosed no relevant financial relationships.