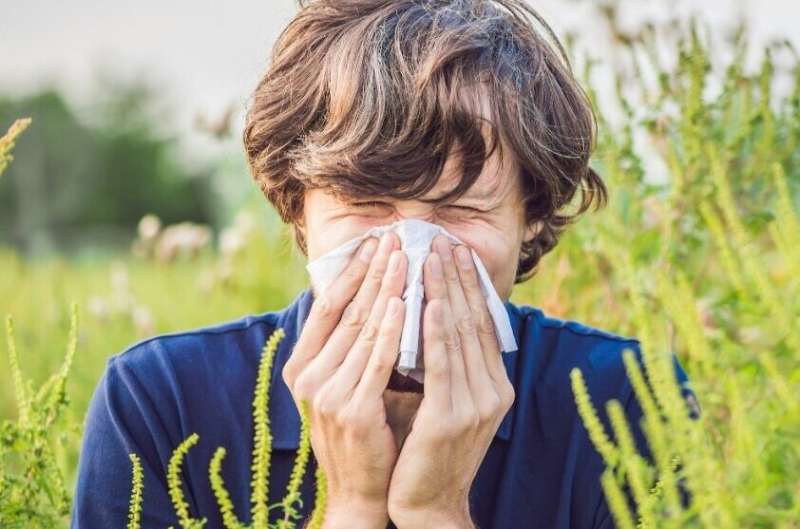 Air levels of pollen and mold spores in the San Francisco Bay Area are elevated for about two more months per year than in past decades, and higher temperatures are to blame, a Stanford Medicine study has found.

Bay Area allergy sufferers take note: Climate change has lengthened the local pollen and mold season by eight to nine weeks per year during the past two decades, according to a study from the Stanford University School of Medicine.

The study, based on allergen data collected starting in 2002 in Los Altos Hills, California, found that local temperature increases are linked to longer tree and grass pollen seasons, while changes in local precipitation are linked to more mold spores in the air. Tree pollen and mold seasons each grew by about half a week per year from 2002 through 2019, the study found. The research, the first to analyze the effects of climate change on airborne allergens in the San Francisco Bay Area, was published online in the journal Scientific Reports.

“Climate change is really a problem for health, and we are living and breathing the effects of climate change now,” said the study’s senior author, Kari Nadeau, MD, Ph.D., professor of medicine and of pediatrics at Stanford School of Medicine. Nadeau, who directs the Sean N. Parker Center for Allergy and Asthma Research and is the Naddisy Foundation Professor in Pediatric Food Allergy, Immunology and Asthma, became interested in the problem because her patients kept saying their seasonal allergies were getting worse.

“As an allergist, it is my duty to follow the pollen counts, and I was noticing that the start date of the tree pollen season was earlier every year,” she said. “My patients were complaining, and I would say, “This is such a tough year,” but then I thought, wait, I’m saying that every year.”

The researchers analyzed airborne pollen and mold spore data collected at a National Allergy Bureau-certified pollen counting station in Los Altos Hills. They tabulated concentrations of tree, grass and weed pollens and of mold spores in the air weekly throughout the 18-year period. Allergens from more than 100 species were identified, but the scientists focused their analysis on the 20 species most commonly observed in the area. They used environmental data, obtained from the National Oceanic and Atmospheric Administration, on daily maximum temperatures, precipitation, carbon dioxide levels and wildfire smoke exposure.

Pollen season now starts earlier and ends later for many species of plants and molds, the researchers found. Local tree pollen and mold spore seasons grew by 0.47 and 0.51 weeks per year, respectively. Although the allergy season has lengthened, pollen concentrations have fallen somewhat, an effect that the researchers speculate may be a result of increased urbanization and less wild land in the Bay Area.

Although several studies in other regions have found that higher atmospheric carbon dioxide is connected to increased pollen levels, the researchers did not find that carbon dioxide levels and wildfire smoke exposure were statistically linked to changes in pollen and mold spore levels.