Olympian Lisa Curry has drawn sharp criticism from health experts for implying women should avoid prescribed hormone replacement therapy and use supplements, which she sells.

A statement released by the former champion swimmer to promote a TV appearance said hormone therapy had been "proven to increase women's risk of breast cancer", and promoted "natural" treatments such as her own brand, Happy Hormones. 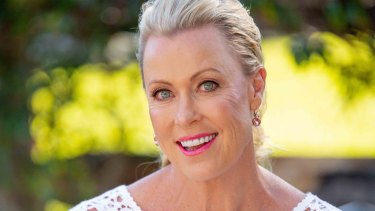 Curry will appear nude on the forthcoming special The All New Monty: Ladies Night, to "raise awareness around hormonal imbalance and its role in breast cancer", but Susan Davis, Professor of Women's Health at Monash University and president of the International Menopause Society, said suggesting that "natural" supplements be used as a primary tool for treating menopausal symptoms could "unwittingly devastate the lives of women".

Davis said the findings of the study cited in Curry's press release – "which in themselves are questionable" – had been taken out of context.

“The data is old, it is not relevant to the hormone therapy regimens used to treat women today, it is observational (which usually means the effects are overestimated) and it is from studies with inherent bias,” Professor Davis said.

Curry's promotional material suggested use of menopausal hormone therapy (MHT) had been found to be "dramatically increasing" breast cancer risk by the review, published in The Lancet last month.

There's no one size fits all … speak about it with someone who knows what they are talking about. The first place to start is your GP.

It described Curry as a "passionate advocate for hormonal balance [who] has spent the past five years working with leading naturopath Jeff Butterworth to develop a community built around the natural management of hormonal imbalance, Happy Healthy You".

The company's Happy Hormones were "designed to work and encourage the body to produce the necessary levels of hormones itself which is the natural process".

Professor Davis said it was admirable that Ms Curry wanted to support breast cancer awareness but such claims were "a load of codswallop" and evidence that supplements relieve troubling menopausal symptoms or prevent disease is "lacking".

It was also of concern that non-medically trained staff could direct women by phone to buy products such as Happy Healthy You's Happy Hormones “to accelerate the balancing process” as a solution for menopausal symptoms, she said.

She said Curry's claims had the potential to "terrify" women and those who suffer severe symptoms or who have early menopause, may “inappropriately” stop medical therapy, preventing relief from their symptoms and putting them at risk of premature heart disease and osteoporosis.

“Women have the right to be fully informed to make their own choices, but this is not informing women about the overall benefit: risk ratio of menopausal care, but a highly precarious, unbalanced media grab.”

Gino Pecoraro, Associate Professor of obstetrics and gynaecology at the University of Queensland, also questioned the claims made in Curry's press release. “It’s absolute nonsense … HRT does not massively increase [a claim made in an email accompanying the release] your risk of breast cancer at all. It’s an extra one person in 10,000 women and it decreases your risk of a hip fracture by 50 per cent. It does all these other things.”

Professor Pecoraro said he has “no problem” with Curry promoting a good diet, which her release does, but that managing hormone imbalance “naturally” with hormone supplements is “fraught with danger”.

Any chemical that has an effect on a biological system, by definition is a drug, he said. While conventional treatments are regulated,  “there’s no quality control” of supplements and no requirement for pre-release testing.

“You’ve got to be really careful promoting a drug that you seek to profit from. I would politely say I wouldn’t expect Lisa Curry to understand the intricacies of endocrinology – she’s a swimmer,” Pecoraro said. “There's no one size fits all [for treatment of menopausal symptoms] … speak about it with someone who knows what they are talking about. The first place to start is your GP.”

Ms Curry responded to the criticism saying "for the vast majority of women menopause can be safely and effectively navigated using natural therapies", but "for women living with severe symptoms relating to menopause, HRT may be their only solution".

“At Happy Healthy You, we always recommend women living with symptoms relating to menopause speak with their doctor about the best course of action for them.”