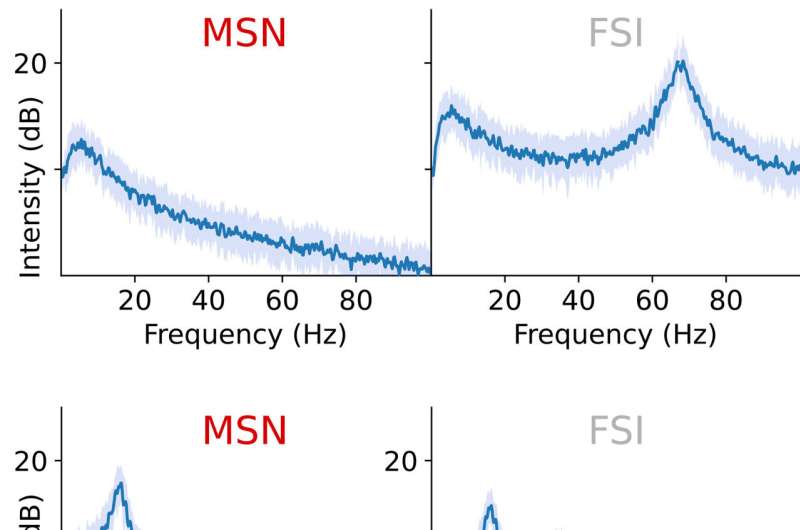 People with Parkinson’s disease and their doctors confront many unknowns, including the answer to exactly how deep brain stimulation (DBS) relieves some of the motor symptoms patients experience. In a new study, scientists at Boston University and The Picower Institute for Learning and Memory at MIT present a detailed model explaining the underlying circuit dynamics, providing an explanation that, if experimentally confirmed, could improve the therapy further.

Among the things that are known about Parkinson’s disease is that a deficit of the neuromodulator dopamine is associated with abnormally high beta-frequency rhythms (brain waves at a frequency of about 20 Hz). DBS, involving the delivery of high-frequency electrical stimulation to a region called the subthalamic nucleus (STN), apparently suppresses these elevated beta rhythms, restoring a healthier balance with other rhythm frequencies and better movement control.

The new biophysically-based computational model described in the Proceedings of the National Academy of Sciences posits that the beneficial effect of DBS arises from how it interrupts a vicious cycle promoting runaway beta in a circuit loop between the STN and a region called the striatum. In 2011, study co-author Michelle McCarthy, research assistant professor of mathematics and statistics at BU, used mathematical models to show how, in the absence of dopamine, runaway beta might arise in the striatum from excessive excitement among striatum-dwelling cells called medium spiny neurons (MSNs).

The model, led by Picower Institute postdoc Elie Adam, builds on McCarthy’s finding. Joining Adam and McCarthy are co-authors Emery N. Brown, Edward Hood Taplin Professor of Medical Engineering and Computational Neuroscience at MIT and Nancy Kopell, William Fairfield Warren Distinguished Professor of Mathematics and Statistics at BU. The quartet’s work posits that under healthy conditions, with adequate dopamine, cells in the striatum called fast-spiking interneurons (FSIs) can produce gamma-frequency rhythms (30-100 Hz) that regulate the beta activity of the MSNs. But without dopamine, the FSIs are unable to limit the MSN activity and beta comes to dominate a whole circuit loop connecting the STN to the FSIs, to the MSNs, to other regions and then back to the STN.

“The FSI gamma is important to keep the MSN beta in check,” Adam said. “When dopamine levels go down, the MSNs can produce more beta and the FSIs lose their ability to produce gamma to quench that beta, so the beta goes wild. The FSIs are then bombarded with beta activity and become conduits for beta themselves, leading to its amplification.”

When DBS high-frequency stimulation is applied to the STN, the model shows, that replaces the overwhelming beta input received by the FSIs and restores their excitability. Reinvigorated and freed from those beta shackles, the interneurons resume producing gamma oscillations (at about half the DBS stimulation frequency, typically at 135 Hz) that then suppress the beta activity of the MSNs. With the MSNs no longer producing too much beta, the loop leading back to the STN and then to the FSIs is no longer dominated by that frequency.

“DBS stops the beta from propagating towards FSIs so that it is no longer amplified, and then, by additionally exciting FSIs, restores the ability of FSIs to produce strong gamma oscillations, that will in turn inhibit beta at its source,” Adam said.

The model reveals another important wrinkle. Under normal circumstances, different levels of dopamine help shape the gamma produced by the FSIs. But the FSIs also receive input from the brain’s cortex. In Parkinson’s disease, where dopamine is absent and beta becomes dominant, the FSI’s lose their regulatory flexibility, but amid DBS, with beta dominance disrupted, the FSIs can instead become modulated by input from the cortex even with dopamine still absent. That allows them a way to throttle the gamma they provide to the MSNs, and enable a harmonious expression of beta, gamma and theta rhythms.

By providing a deep physiology-based explanation of how DBS works, the study may also offer clinicians clues to how to make it work best for patients, the authors said. The key is finding the optimal gamma rhythms of the FSIs, which may vary a bit from patient to patient. If that can be determined, then tuning the DBS stimulation frequency to promote that gamma output should ensure the best results.