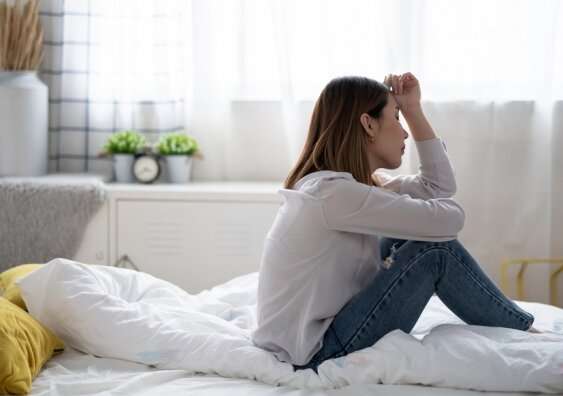 Neurotransmitters help regulate our emotions—but scientists have noticed a disruption to their levels in people with chronic pain.

More than 3 million Australians experience chronic pain, an ongoing and often debilitating condition that can last from months to years. This persistent pain can impact many parts of a person’s life, with almost half of people with chronic pain also experiencing major anxiety and depression disorders.

Now, a new study led by UNSW Sydney and NeuRA shows that people with chronic pain have an imbalance of neurotransmitters in the part of the brain responsible for regulating emotions.

This imbalance could be making it harder for them to keep negative emotions in check—and the researchers think persistent pain might be triggering the chemical disruption.

The findings are published today in the European Journal of Pain.

“Chronic pain is more than an awful sensation,” says senior author of the study Associate Professor Sylvia Gustin, a neuroscientist and psychologist at UNSW and NeuRA. “It can affect our feelings, beliefs and the way we are.

“We have discovered, for the first time, that ongoing pain is associated with a decrease in GABA, an inhibitive neurotransmitter in the medial prefrontal cortex. In other words, there’s an actual pathological change going on.”

GABA, or γ-aminobutyric acid, is the main inhibitory neurotransmitter in the central nervous system. Its role in the medial prefrontal cortex—the part of the brain where emotional regulation happens—is to help dial down our emotions.

The research team used advanced neurological imaging to scan GABA content in the medial prefrontal cortex of 48 study participants, half of which experienced some form of chronic pain. A/Prof. Gustin says this relatively small sample size is typical for neurological imaging studies, which are costly to run.

The results show that participants with chronic pain had significantly lower levels of GABA than the control group—a pattern that was consistent regardless of their type of chronic pain.

“A decrease in GABA means that the brain cells can no longer communicate to each other properly,” says A/Prof. Gustin.

“When there’s a decrease in this neurotransmitter, our actions, emotions and thoughts get amplified.”

While the link between chronic pain and decreased levels of GABA has previously been found in animal studies, this is the first time it’s been translated to human studies.

A/Prof. Gustin says she hopes the findings are encouraging for people with chronic pain who may be experiencing mental health issues.

“It’s important to remember it’s not you—there’s actually something physically happening to your brain,” she says.

“We don’t know why it happens yet, but we are working on finding solutions on how to change it.”

GABA is one of many neurotransmitters in the medial prefrontal cortex—and it’s not the only one behaving differently in people with pain.

In a previous study, A/Prof. Gustin and her team found that levels of glutamate, the main excitatory neurotransmitter in the central nervous system, are also lower than average in people with chronic pain. These low glutamate levels were linked to increased feelings of fear, worry and negative thinking.

“Together, our studies show there’s really a disruption in how the brain cells are talking to each other,” says A/Prof. Gustin, who has been researching chronic pain for over 20 years.

“As a result of this disruption, a person’s ability to feel positive emotions, such as happiness, motivation and confidence may be taken away—and they can’t easily be restored.”

A/Prof. Gustin says chronic pain is likely to be the culprit behind these neurological changes. However, this theory could only be tested by scanning participants’ brains both before and after they develop chronic pain—and as brain imaging is expensive to conduct, it’s unlikely such a large-scale project would be possible without major funding.

“Everything starts with stress,” she says. “When someone is in pain, it increases stress hormones like cortisol, which can trigger massive increases in glutamate. This happens during the initial, acute stage of pain.

“Too much glutamate can be toxic to brain cells and brain function. We think this disruption to normal brain function may cause the GABA and glutamate levels to change—and impair a person’s ability to regulate their emotions.”

A new form of treatment

Medication is often used to help treat chronic pain, but there are currently no drugs that directly target the GABA and glutamate content in the medial prefrontal cortex. Instead, medication affects the entire central nervous system, and may come with side effects.

A/Prof. Gustin and her team have recently developed an online emotional recovery program, specifically targeted at people with chronic pain, as a non-pharmaceutical option for treating the neurotransmitter disruption.

The findings will be presented in a paper later this year, but the initial results are encouraging.

“The online therapy program teaches people skills to help self-regulate their negative emotions,” says A/Prof. Gustin, who welcomes people interested in learning more about the program to contact the team.