Experts have dismissed their intervention as ‘mean-spirited’ and ‘puritanical’. 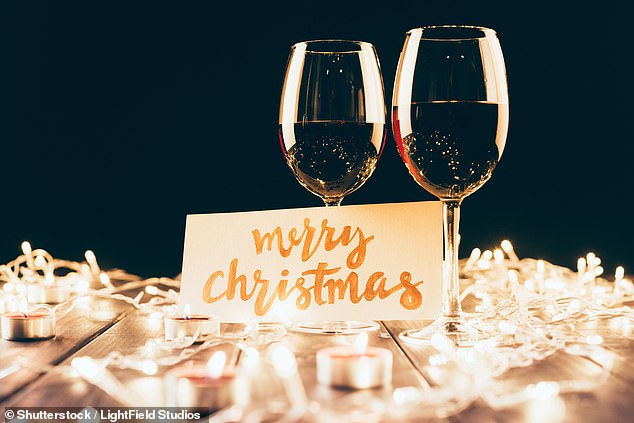 ‘Illustrations and texts portray alcohol as enjoyable and fun, and can range from a glass of champagne with the word ‘Cheers’ to those that are more excessive and encourage binge drinking.

‘Phrases such as ‘let’s get wrecked’, ‘all the gin’, ‘trollied’ are printed across illustrations of people clearly drunk, surrounded by empty bottles, drinking directly from a bottle, or in some case unconscious.

‘These cards reflect and reinforce a social attitude that excess alcohol consumption is acceptable and associated with celebration.

‘They influence views on drinking and reinforce this as a social norm.’ They said people in the UK buy more cards than any other nation – an average of 33 each a year.

‘Over 10million people across the UK are drinking at levels which increase their risk of health harms, and alcohol consumption is the leading risk factor for ill-health, early mortality and disability in those aged 15 to 49,’ they wrote.

‘While alcohol-related deaths and illness are increasing across the UK and Public Health England is running campaigns targeting excess alcohol consumption, these cards reflect that many people consider drinking to be harmless and fun.

‘Ultimately the responsibility for choosing cards lies with the purchaser so perhaps it is worth reflecting the next time that you choose one whether the message is one that you condone and wish to pass on.’

Frank Furedi, emeritus professor of sociology at the University of Kent, said: ‘This is typical of the puritanical, mean-spirited approach to everything in life that is dominating at the moment.

‘At the end of the day the idea that people’s behaviour is influenced by images on greeting cards is just crazy.’

A spokesman for the Alcohol Information Partnership, an industry group which aims to promote balanced debate about drinking, said: ‘The notion that people who send and receive cards like this cannot distinguish between public health advice and humour is far-fetched.

‘Insisting that all light hearted greetings cards must include public health messages is a pretty Grinch-like view of the world.’

DO YOU DRINK TOO MUCH ALCOHOL? THE 10 QUESTIONS THAT REVEAL YOUR RISK

One screening tool used widely by medical professionals is the AUDIT (Alcohol Use Disorders Identification Tests). Developed in collaboration with the World Health Organisation, the 10-question test is considered to be the gold standard in helping to determine if someone has alcohol abuse problems.

The test has been reproduced here with permission from the WHO.

To complete it, answer each question and note down the corresponding score.

0-7: You are within the sensible drinking range and have a low risk of alcohol-related problems.

Over 8: Indicate harmful or hazardous drinking.

8-15: Medium level of risk. Drinking at your current level puts you at risk of developing problems with your health and life in general, such as work and relationships. Consider cutting down (see below for tips).

16-19: Higher risk of complications from alcohol. Cutting back on your own may be difficult at this level, as you may be dependent, so you may need professional help from your GP and/or a counsellor.

20 and over: Possible dependence. Your drinking is already causing you problems, and you could very well be dependent. You should definitely consider stopping gradually or at least reduce your drinking. You should seek professional help to ascertain the level of your dependence and the safest way to withdraw from alcohol.

Severe dependence may need medically assisted withdrawal, or detox, in a hospital or a specialist clinic. This is due to the likelihood of severe alcohol withdrawal symptoms in the first 48 hours needing specialist treatment.