Children who believe they are trans are probably just going through a short-lived phase, the NHS has told doctors.

The health service last week issued draft guidance on treating children and young people with gender dysphoria — those who feel their gender is different from their sex.

Doctors should be open to ‘exploring all developmentally appropriate options’ with youngsters who believe they are trans but be ‘mindful that this may be a transient phase’, it states.

Health chiefs noted that in ‘most cases gender incongruence does not persist into adolescence’.

Its guidance says ‘social transitioning’ should be no longer be viewed as a ‘neutral act’ due to the significant effects it may have on a child’s psychology.

Social transitioning is when a person lives as a gender different to their biological sex but doesn’t take drugs to transition, such as controversial puberty blockers or hormones.

It may see a person change their name, pronouns and dress in clothes associated with their opposite sex. They may also use the bathrooms of their preferred identity rather than their biological sex. 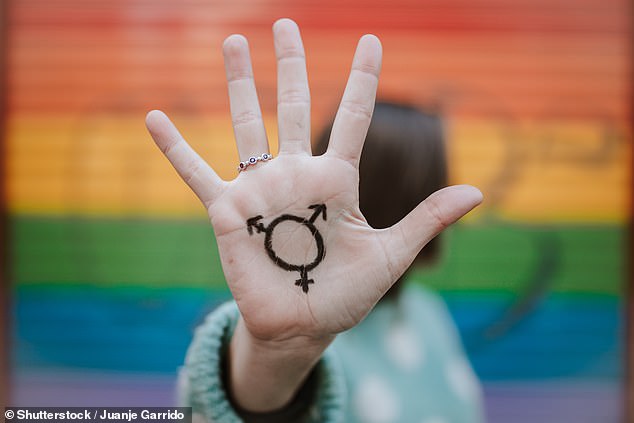 Children considering changing gender could be discouraged from social transitioning, like switching pronouns or dressing like the opposite sex as NHS the proposes to shake-up its approach to gender identity care

At least 15 children under the age of four were directed to the NHS’s transgender health service in England in the past two years.

A similar number of five-year-olds were referred between 2021-2022 to the highly-controversial Gender Identity Development Service (GIDS) at the Tavistock clinic, the country’s only gender identity service for children.

NHS documents state that, in total, over 5,000 children were referred to Tavistock’s service in the past two years, over concerns they were suffering from their gender identity not matching their biological sex.

Only half of referrals were for children aged 15-plus.

The NHS data, unveiled among some new guidelines for how to treat children with gender dysphoria, only concerns referrals to the GIDS at Tavistock.

Not all of the patients would have been taken on for actual treatment, which can include puberty blockers and hormones that help change their bodies to align more with their gender identity.

It is not known how many of the children aged five or under referred to GIDS went on to become patients. Any that did are unlikely to have been prescribed medication.

But the figure is likely to cast even more questions over how children questioning their gender are directed to NHS care in England.

NHS England is cracking down on how children are referred to gender identity care in the future, in the wake of the Tavistock chaos which saw its GIDS service ruled unsafe following a review.

The guidance sets out that medics should carefully consider encouraging prepubescent children to socially transition due to the mental health risks they face in their teenage years.

‘The clinical approach has to be mindful of the risks of an inappropriate gender transition and the difficulties that the child may experience in returning to the original gender role upon entering puberty if the gender incongruence does not persist into adolescence,’ the guidance reads.

Even for older children, those already in their adolescence, social transitioning should only be considered a last resort in severe cases, the NHS suggests.

‘Social transition should only be considered where the approach is necessary for the alleviation of, or prevention of, clinically significant distress or significant impairment in social functioning and the young person is able to fully comprehend the implications of affirming a social transition,’ the draft reads.

She said: ‘Professionals working with children need to reflect on that and make sure they aren’t inadvertently causing harm by providing short term relief that leads to long term distress.

The NHS England draft guidelines are part of the health service’s plan to close the highly-controversial Gender Identity Development Service (GIDS) at the Tavistock clinic, the country’s only gender identity service for children.

GIDS is scheduled to shut its doors in the spring after a review ruled that the service was unsafe.

It found that other mental health issues were ‘overshadowed’ in favour of gender identity treatment, prompting accusations that staff rushed children onto powerful drugs.

As part of its response NHS England said GIDS would be replaced with two services — one in London and one in the North West.

The new London service will be run by a partnership between Great Ormond Street Hospital for Children and Evelina London Children’s Hospital.

In the North West, the service will be a partnership between Alder Hey Children’s NHS Foundation Trust and Royal Manchester Children’s Hospital.

Afurther six or seven similar services might be opened in other parts of the country.

These services would operate under the draft documents now up for public consultation.

Other changes in the draft include a clampdown on referrals to gender identity care.

Under current guidelines, health and social service staff, teachers, and charities can refer a child they think is suffering from gender dysphoria to specialist NHS care.

But in the new system referrals to NHS gender identity care would be restricted to just GPs and health service staff. 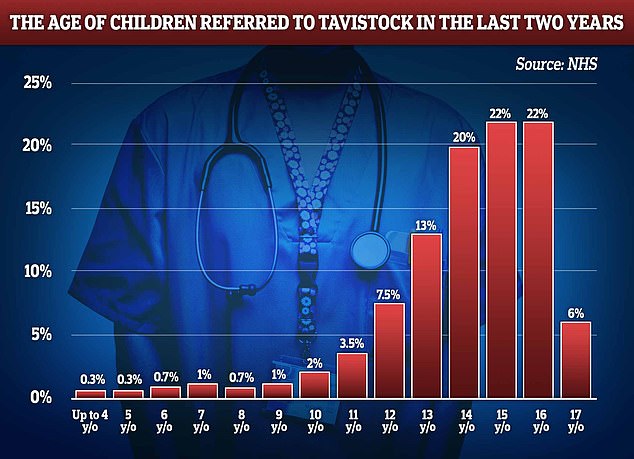 Other sections of the draft also detail that puberty blockers should only be provided via an NHS research programme, and medics should consider safeguarding processes if children obtain such drugs online.

The documents released yesterday also show that least 15 children under the age of four were directed to the NHS’s transgender health service in England in the past two years.

A similar number of five-year-olds were referred between 2021-2022 at GIDS.

NHS documents state that in total over 5,000 children were referred to Tavistock’s service in the past two years, over concerns they were suffering from their gender identity not matching their biological sex.

Only half of referrals were for children aged 15-plus.

Patients currently being treated at Tavistock’s Gender Identity Development Service (GIDS) will have their care transferred to the new operators early next year.

NHS England penned the draft guidelines are in response to an ongoing review of GIDS by senior paediatrician Dr Hilary Cass, who warned the gender clinic was ‘not a safe or viable long-term option’.

She found other mental health issues were ‘overshadowed’ in favour of gender identity issues when children were referred to Tavistock.

Dr Cass has called for ‘rapid’ research on the use of the drugs after she found ‘insufficient evidence’ on their benefits.

GIDS has found itself facing increasing scrutiny in recent years, with campaigners accusing it of rushing children onto puberty blocking drugs.

Former patient Keira Bell took the clinic to the High Court in 2020, claiming that she had not been challenged enough when she was prescribed the drugs at age 16.

Feedback on the NHS’s draft guidelines closes on 4 December.